The stretch of highway from Flagstaff to Albuquerque rests on the historic Route 66. As a result, we spent the entire day traveling this historic route from Flagstaff, Arizona all the way to Socorro, New Mexico. 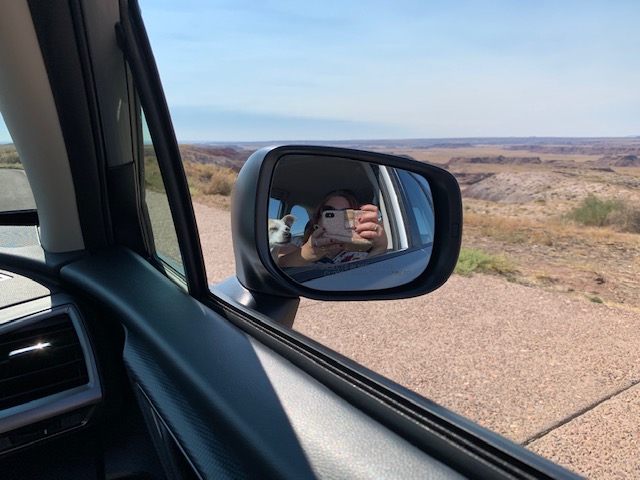 What I learned this time, as I traveled Route 66 (another road trip I hope to take some day covering its entirety) is how Route 66 actually came to be and disappeared. As in its decommission from official existence. I used to think it was an actual highway, that changed names thanks to the advent of the Interstate freeway system. But thanks to my handy Route 66 guidebook, I learned this understanding was incorrect - Route 66 was a particular route that covered many highways, and it even changed from year-to-year. What happened when it was decommissioned is that the signs designating the route were taken down. Now, the only way to find Route 66 is the historic designation, guide books, and an uncanny sense for finding weird roadside attractions. 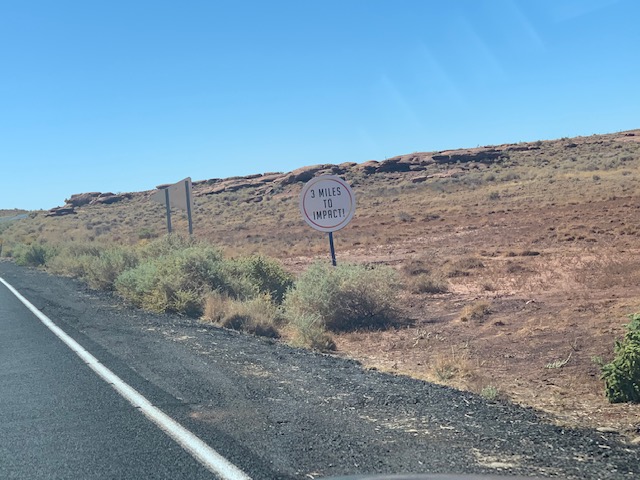 Which brings me to the Meteor Crater. A wonderful and amazing roadside attraction that dates back a million or so years to when  giant meteor smacked the earth, leaving this perfectly preserved, 100% certified object not of the earth crater behind for us to gawk at to the tune of $22 dollars per person. For me, this was a second visit to the crater (see my Arizona entries from a few years back in this very blog) but I was very excited to see it again. And this time around I purchased meteorite parts to take home with me. 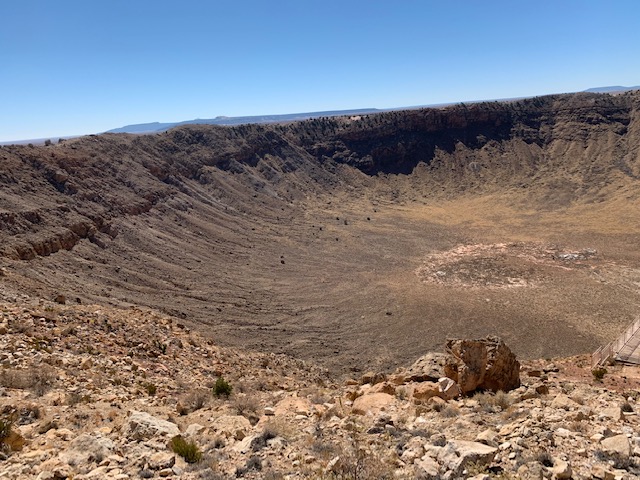 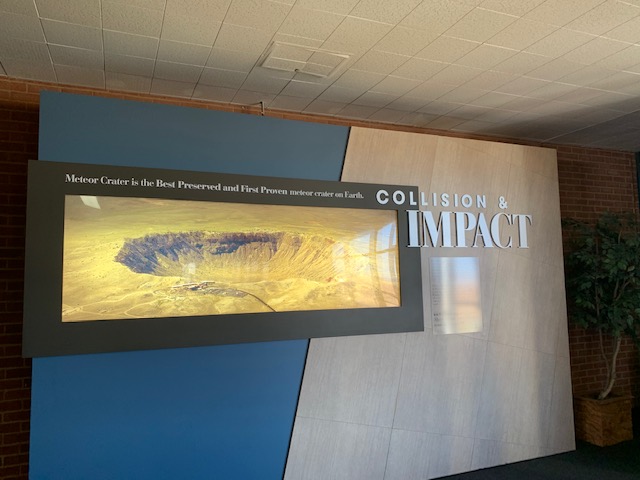 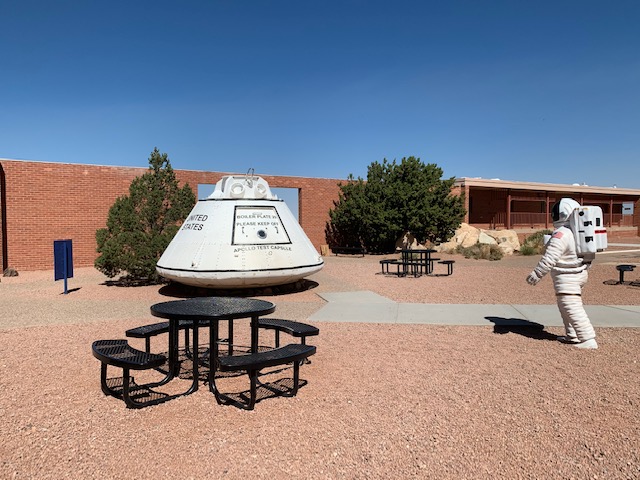 For those who are unaware of the Meteor Crater, it is a privately held, national landmark, turned moon mission training area and roadside tourist attraction. The original owner (whose trust still holds the land) thought he could mine iron from the body of the meteorite he thought was under the earth. Turns out the meteorite disintegrated, so there really wasn't any metal to speak of. But, you can train astronauts how to take core samples the way the will probably half to on the moon inside it. 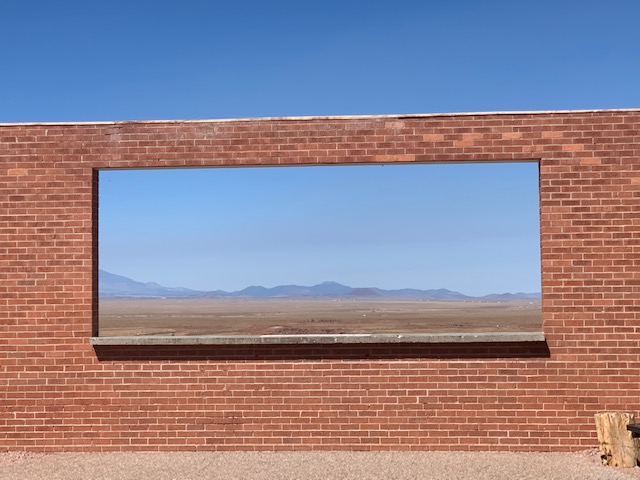 Further along Route 66 (now Interstate 40 for this portion of Arizona), you find the still functioning Wigwam Motel. 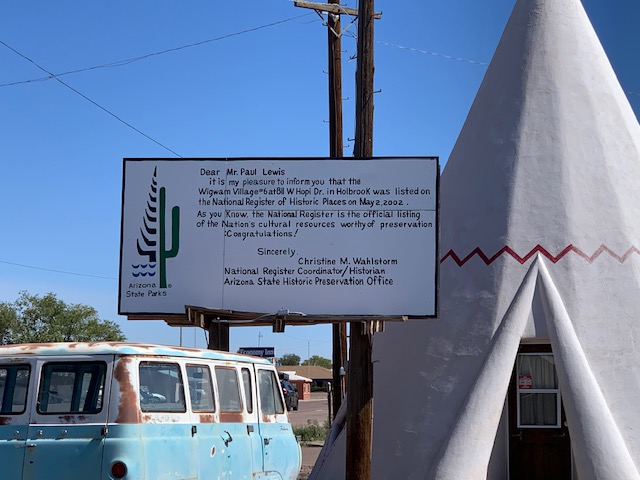 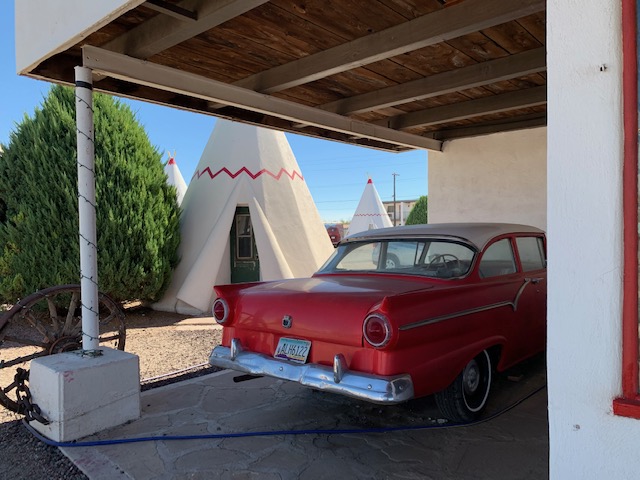 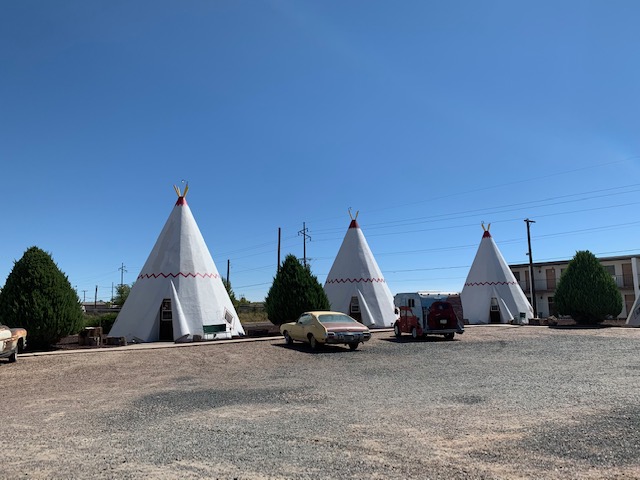 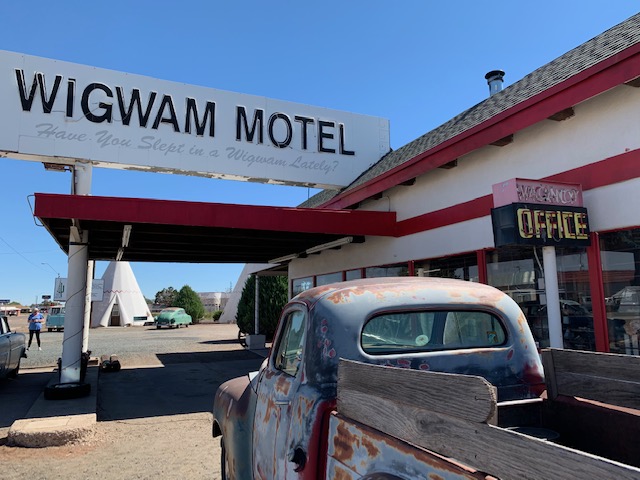 Shanon and I tried to make reservations at the Wigwam, located in Holbrook, Arizona - but we found that it was booked out forever. We did schedule a photo shoot into our Roadtripper route though, to thoroughly examine the location. Which we did, and realized, upon close examination, that the rooms would not have been a great fit for 2 ladies and a dog. They are quite tiny inside the cement wigwams. 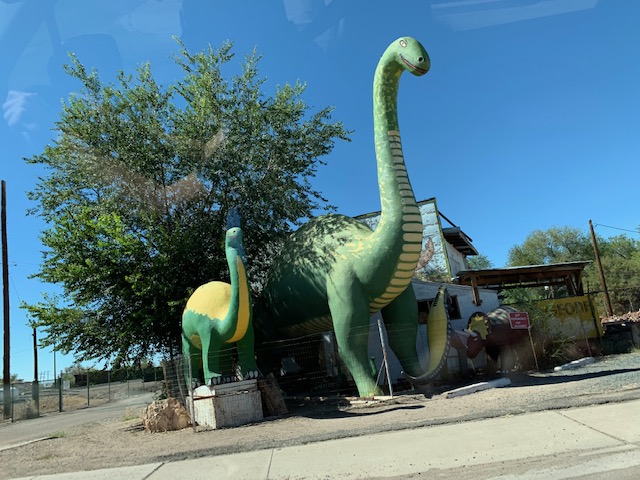 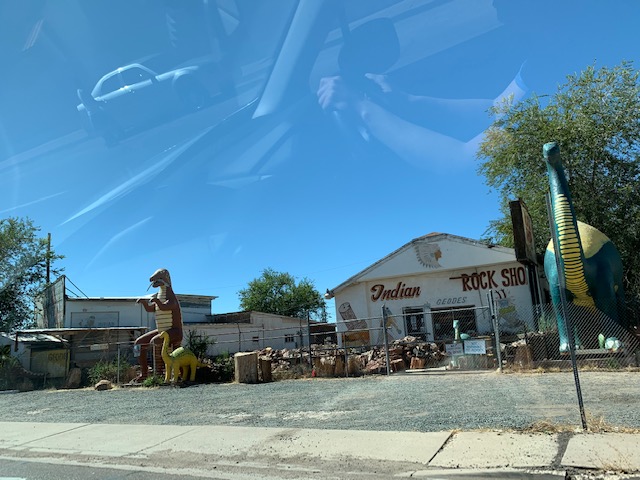 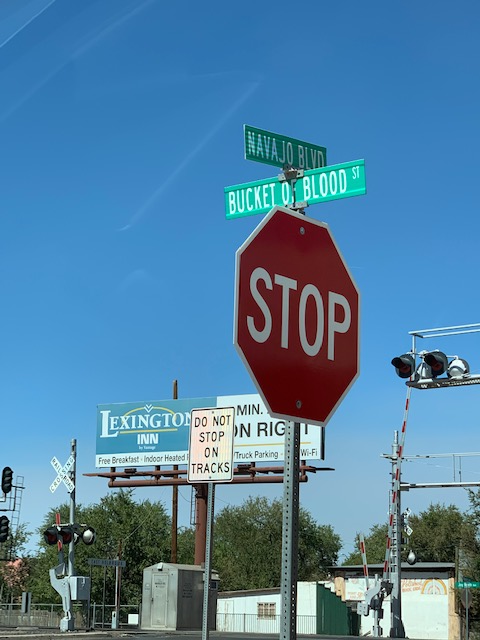 Just down the road are the dinosaurs of the Indian Rock shop, right next door to Bucket of Blood Street. When we were looking for our lunch establishment, we thought Siri or the Google lady were messing with us when she told us to turn around on "Bucket of Blood Street."  But turns out it really is the street name. 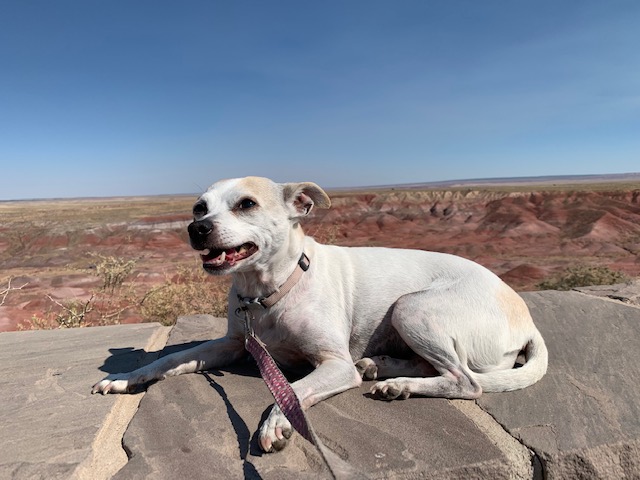 After a very unamazing lunch, the best part being that we were able to secure ourselves a table in a half-way descent place practicing something resembling social distancing and mask wearing, we moved on down the road from Holbrook to the Painted Desert in Petrified Forest National Park. 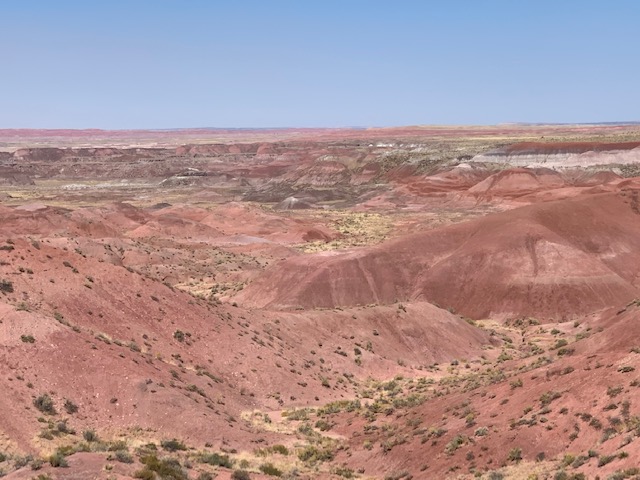 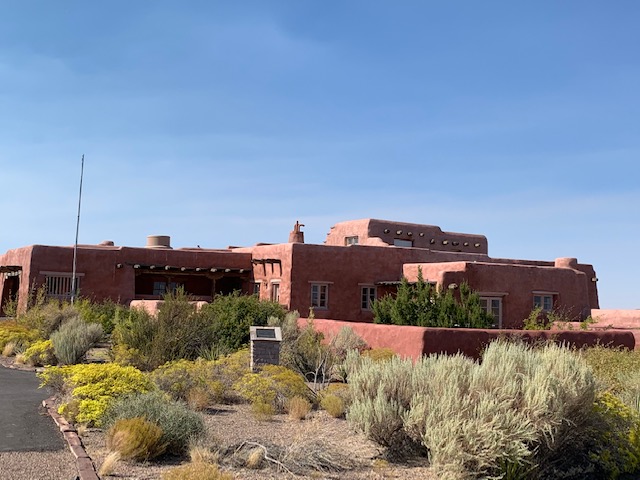 I learned another lesson at this point - the Painted Desert is found inside of the Petrified Forest National Park, and the Petrified Forest National Park holds the largest collection of undisturbed petrified wood in the world. Also the Painted Desert Inn (built and completed first in 1920, then renovated into Parkitecture in the Pueblo Revival style in the 1930's as part of the Depression Era Civilian Conservation Corps projects), is not an actual functional inn or a motel anymore (it hasn't been since 1975), but instead it is a national historical landmark located within the national park. If it were not Covid times, we would have been able to take a tour and see the murals inside the inn. But it is Covid time, so like many things in the world, it is temporarily closed. 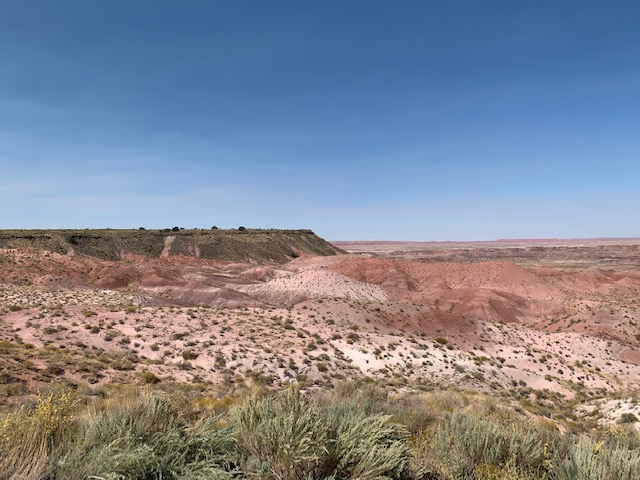 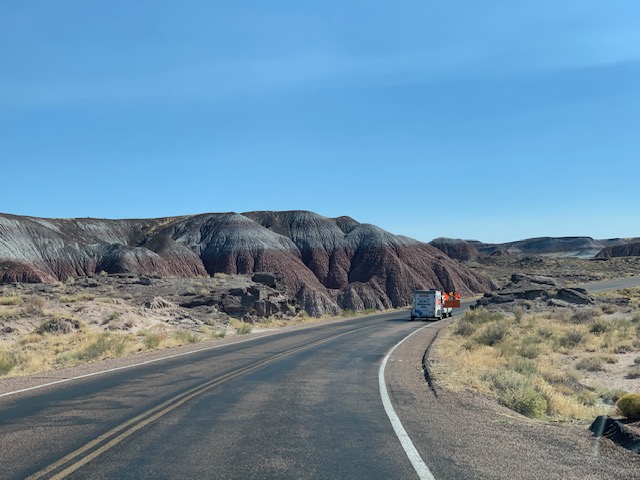 But you cannot close views - so we just kept driving. Driving into the Painted Desert and beyond into the Petrified Forest to see the Blue Mesa with its multitude of earth layers and crystallized wood. 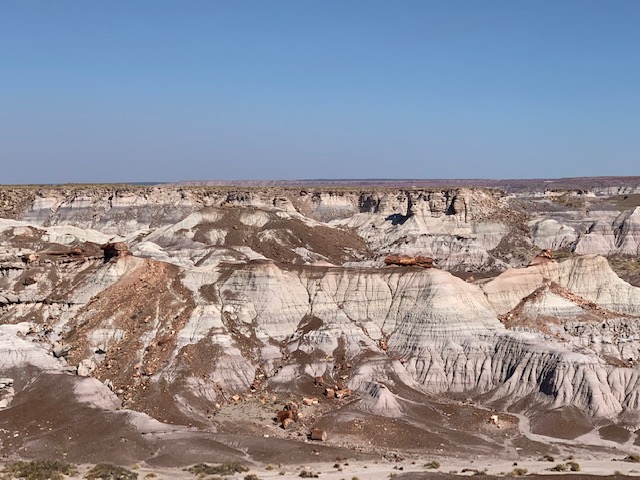 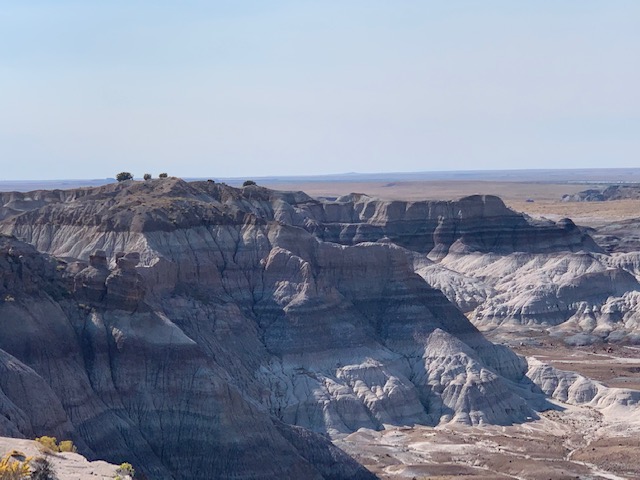 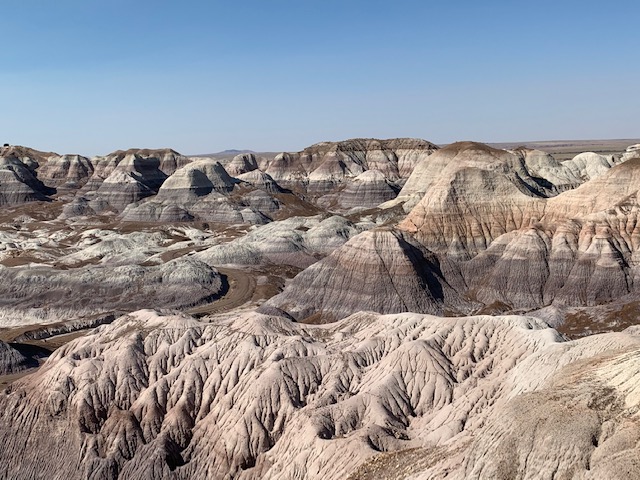 The Petrified Forest was set aside as a national park as early as 1906 to protect its massive collection of petrified wood (that is all mostly quartz crystal, thanks to it being petrified) that is still sitting in the same place as it was in 1906. The park is actually undertaking a project of taking photos now, and comparing them to then to confirm this very fact. And needless to say, despite many a rumor of petrified wood being stolen, the majority of it is still sitting exactly where nature left it. 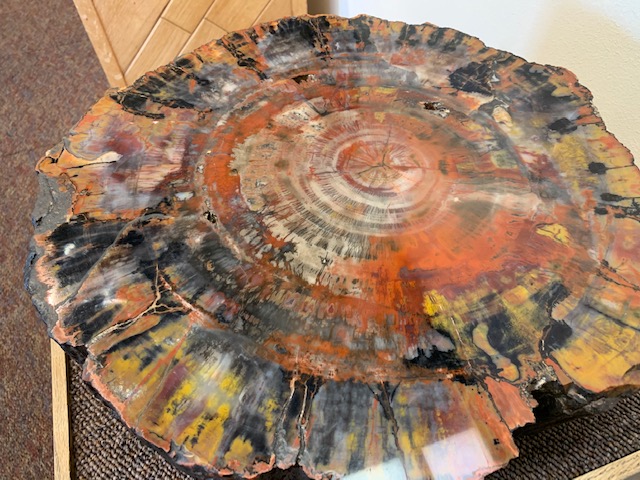 What the researchers studying the geology, fossil record, and petrified wood of this particular land is the ancient Arizona was once a lush jungle, a rain forest, damp and filled with creatures and plants of all shapes and sizes. And then there are the archaeological sites in the park, numbering over 1000 that document the lives of the ancient peoples who lived here before drought forced them to move on and leave their pueblo shelters behind.

The day got away from us and we still had miles to go before we slept, so we were not able to see everything or do any of the short walks under the hot midday sun before we headed East towards New Mexico. 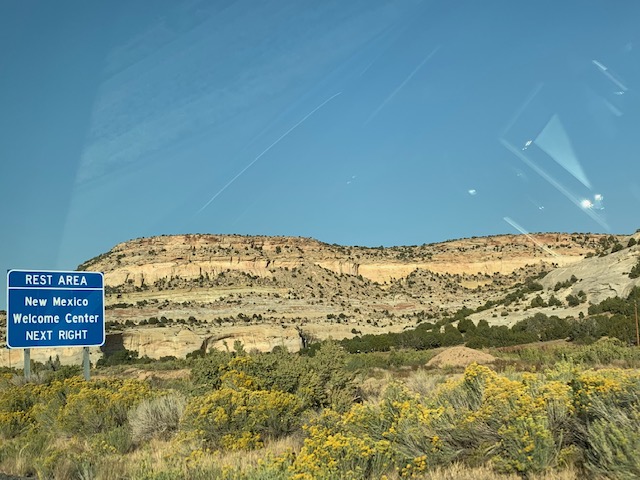 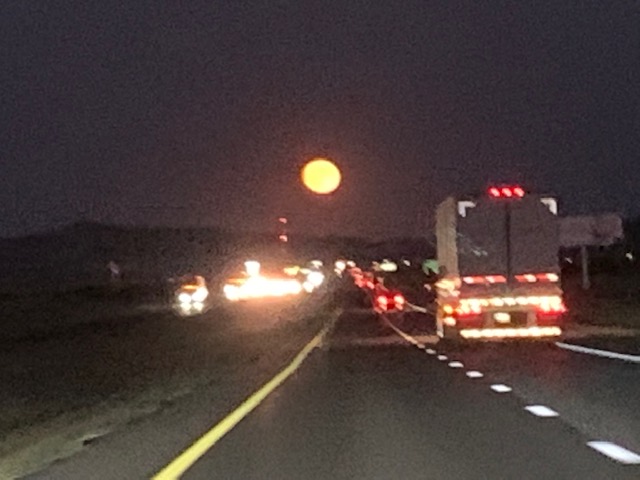 We pushed on, driving into a giant full moon, and made it all the way to Socorro, New Mexico to sleep in a very lovely hotel with super nice staff who waived the pet fee for Princess Charlotte because she was so tiny. I was also one state closer to traveling though all 50 states (I am now only missing Alaska, Nebraska, Alabama, Mississippi, Vermont, and Connecticut).