On Tuesday morning, my traveling companion got up early to watch the sunrise over the Arches.  I slept in, having worked on litigation and other client matters into the night - she enjoyed the sunrise immensely, I enjoyed the time with my bed and my pen writing this blog. It was day 4 on a very aggressive schedule to see all of the things, across many states - and so far, we were keeping it. 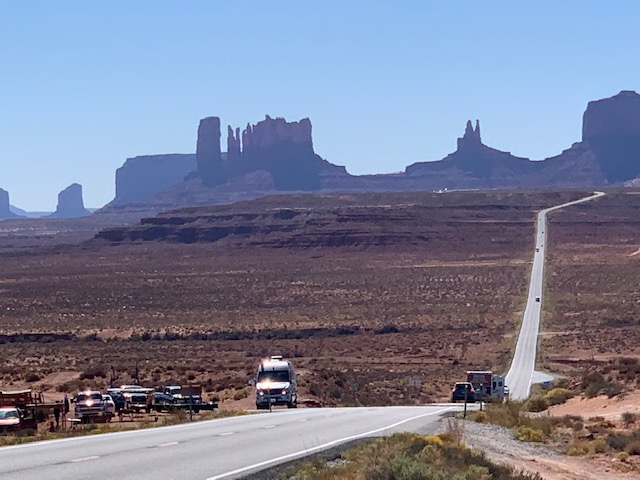 Today was going to be no different, except it would be completely different - in that a little bit of luck and fate directed us to the appropriate scenic route right through one of the most majestic landscapes of the United States of America. It started with breakfast and then back on the road. Right out of the gate we found another amazing arch just leaning over the highway. Then we stopped at a rest stop so Shanon could deal with worky stuff, while I walked the dog. Up above my head, spray painted on the rocks was a giant sign "Hole in the Rock 400 ft (big arrow)." See the picture below.  I took the sign literally, so I spent a good 5 to 10 minutes staring at the rock, looking for the big hole in it. 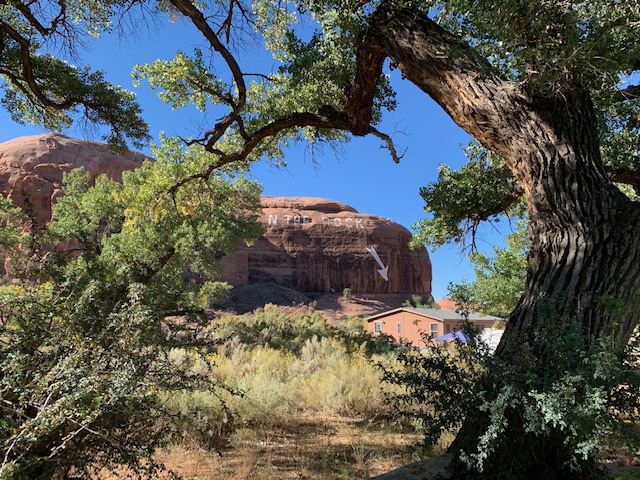 I would find out later in the day, that this "Hole in the Rock" is referencing the journey of 250 Mormon pioneers who arrived in April of 1880 passing through seemingly impassible terrain, who made a 2000 foot descent to the Colorado River basin. This 2000 foot drop is known as The Hole-in-the-Rock. According to the Bluff Fort Historic Site brochure I picked up in the Blanding Visitor's Center a little later in the day, the Hole-in-the-Rock trail is the most preserved wagon road in the West. Having seen a portion of the Oregon Trail recently, I'm not so sure, but again- I was the one taking the name literally just a few hours earlier. And I know nothing about LDS Mission history (except for what I read from that brochure). 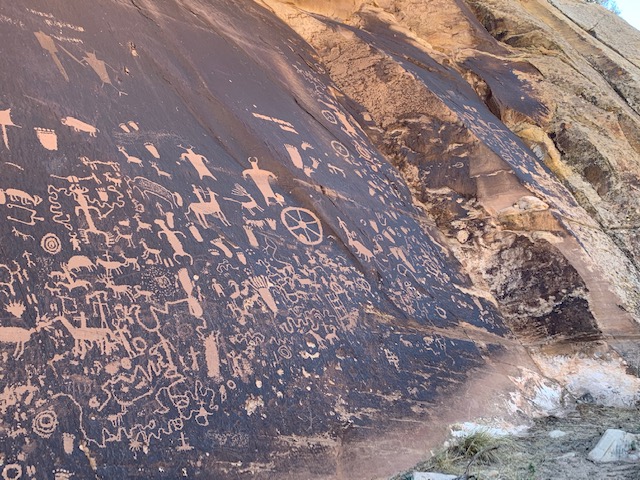 Pondering about giant signs on rocks, and worky stuff complete, we headed to our next destination - Newspaper Rock Recreation Site. Speaking of signs on rocks, Newspaper Rock is the location of a concentration of ancient petrogylphs. I was under the impression that this particular site was quite large (as in spanning the entire side of a particular hill/mound structure) - I was wrong however, it was just one big rock, with a lot of carvings on it. Interestingly enough, the park site was very forward with the fact that "no one knows what the images mean or why the rocks were used as canvas." I was very surprised, as I also had expected interpretations, theories, archaeological treatises, and multiple forms of translation to be as prevalent at the site as the rock writing itself. Instead, I just got to look at ancient pictures and ponder uninfluenced by someone else's theory. 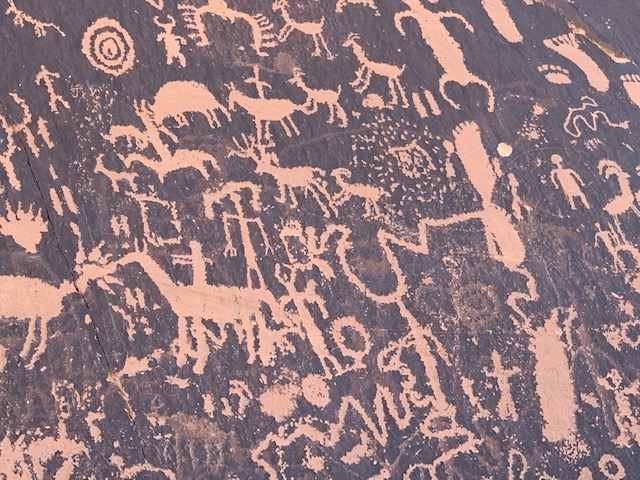 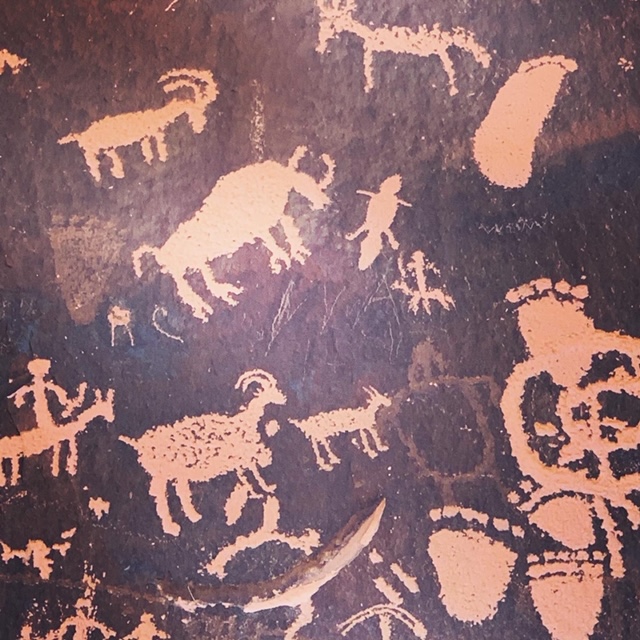 We then had a brief fight with the map, and almost wandered into Canyonlands Wilderness Area, luckily we made the right decision to backtrack to the main road and find Church Rock - which was directly in front of us masquerading as a ship like object. I just don't see the church in this rock - it looks like the front of an ore boat on Lake Superior. 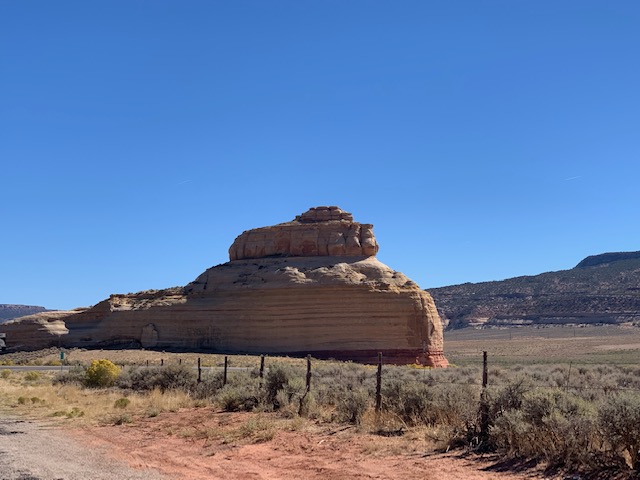 At this point in our journey, we thought that this fine Tuesday might just be "The day of the super quick and semi-disappointing photo opp." We had check two boxes, and it wasn't even noon. We also couldn't journey to 4 Corners because the Navajo Nation is closed because of the pandemic, and 4 Corners is in the middle of native land. Good for them though - I can stand in 4 states at another time. But either way you looked at it, our original route was now way messed up so we decided to go into "stop and see" mode and see where that got us.  It got us to Blanding, Utah, home of a great little empty Visitor's Center filled with beautiful information and books about Utah, Arizona, Colorado and New Mexico (the Colorado Plateau, I learned). It also held and even greater treasure, a very nice visitor center representative who told us, "Do not take the 160, your GPS wants to send you that way, but you need to take the 163 past the Valley of the Gods and Monument Valley, if you want to see anything." 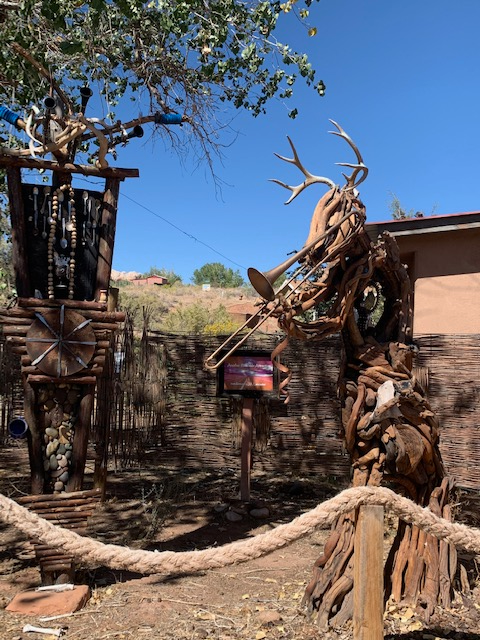 So we took her advice. We got some sandwiches, mini ice cream cones and pondered the meaning of life before we left town with our paper map in hand (as there was to be very little cell phone service), and it seemed appropriate to navigate the area we were going into old school. 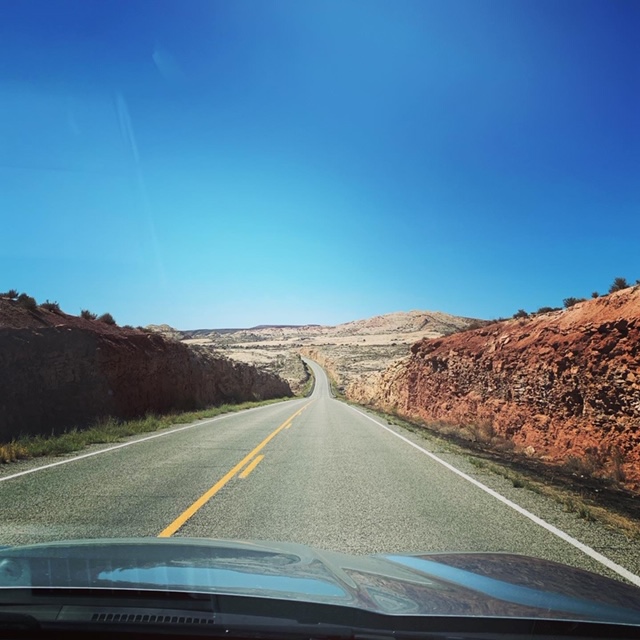 After we left Blanding and put Bluff behind us we got to a point in the road where we came around a corner and everything turned red. 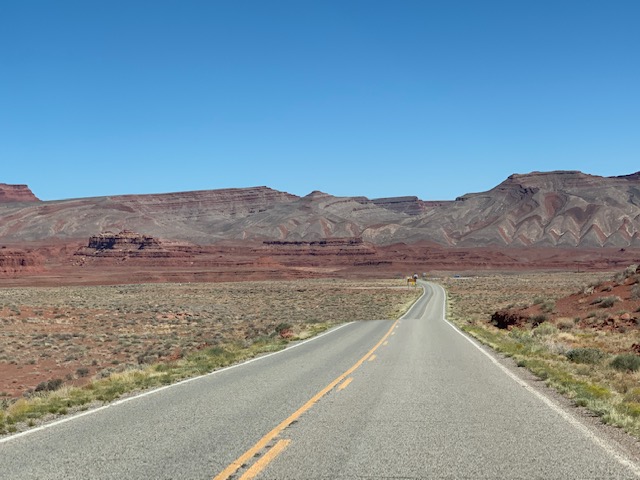 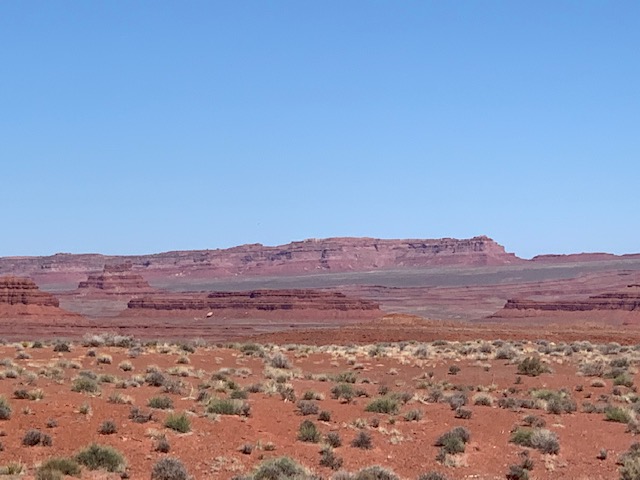 Then we started to see larger and larger formations in the red begin to appear. 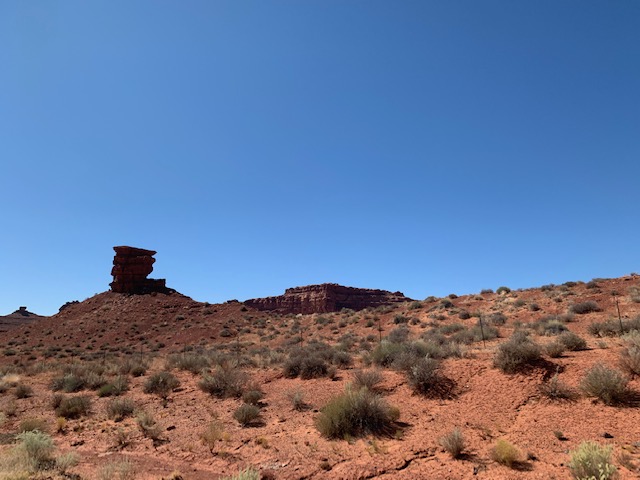 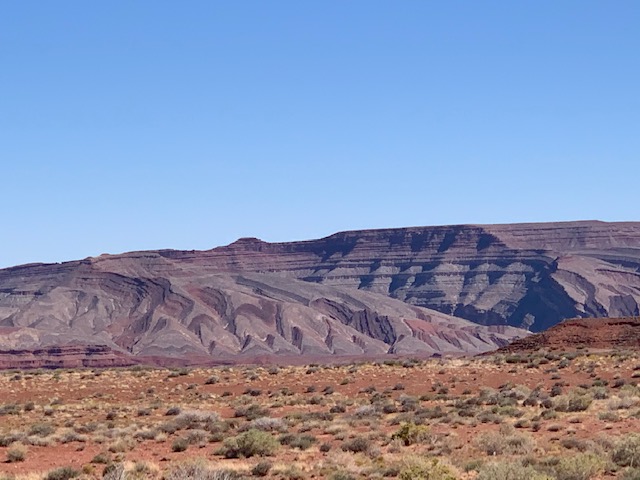 Then they got bigger, and I started to feel like they were looking back at us. 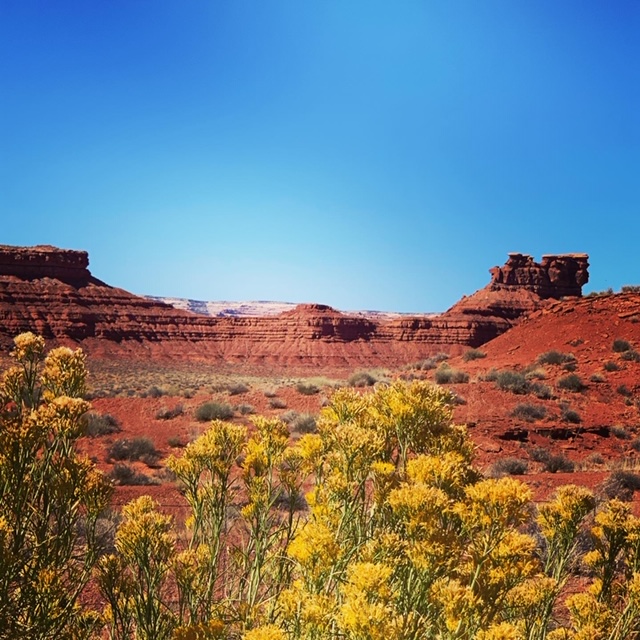 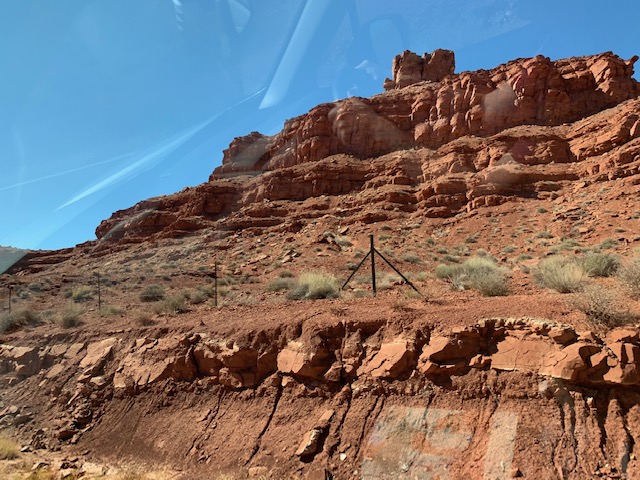 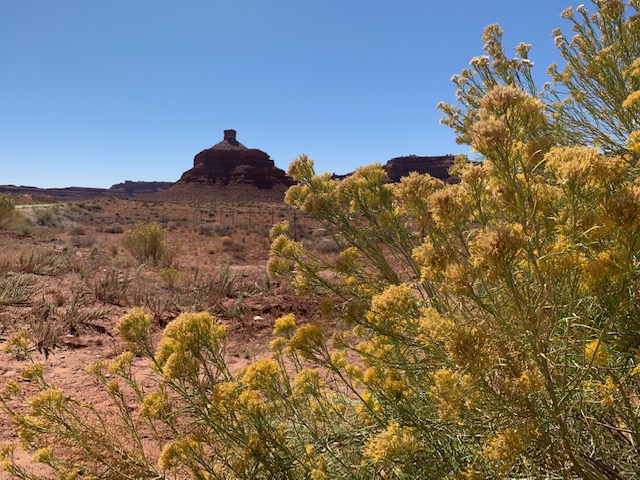 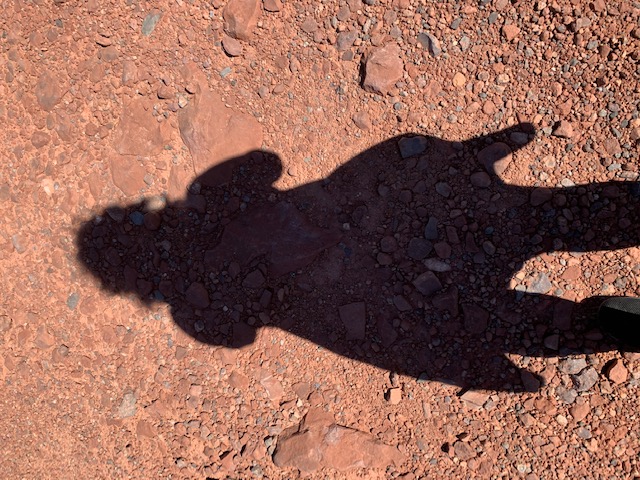 There is nothing like giant monolithic stone structures to put human problems into perspective. There was also immense gratitude for the gift that highway 163 was providing us via our eyes, our minds and our souls by being able to witness this space. We had to make some decisions about the road, as there were ways to go in for a closer look at the Valley of the Gods - but as we were not outfitted to hike or drive old uranium ore truck roads, or primitive park roads, we decided for quantity of views over up close and personal views. And not getting the Subaru stuck in the middle of who even knows you were here Utah. 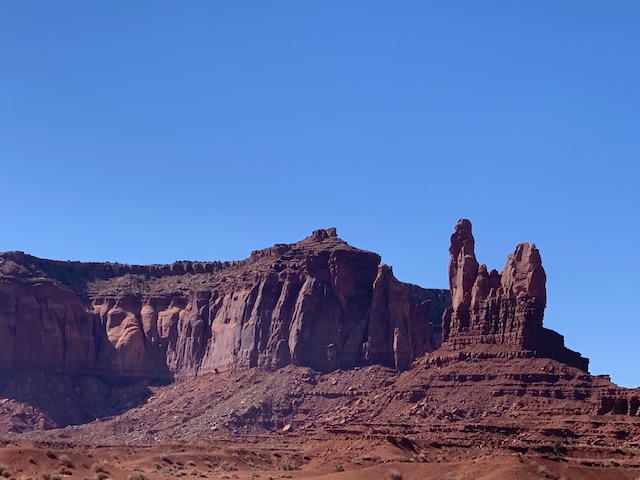 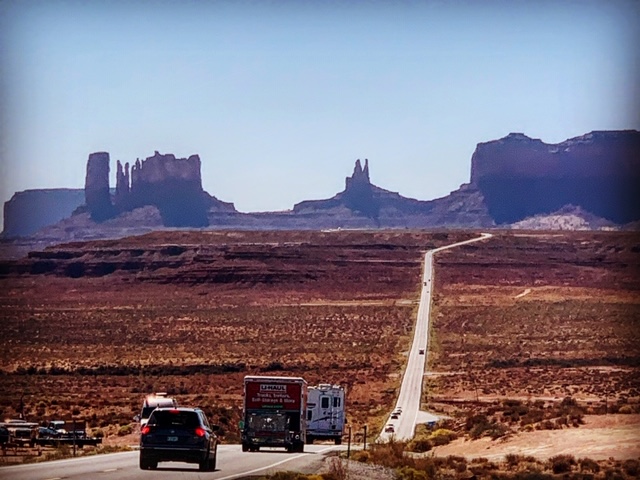 As we continued to drive we found ourselves in Monument Valley, home of taller monolithic rocks than Valley of the Gods, and many Anasazi ruins. As Monument Valley is fully on Navajo land, all services for the park were also closed off, but you can never turn off the view. 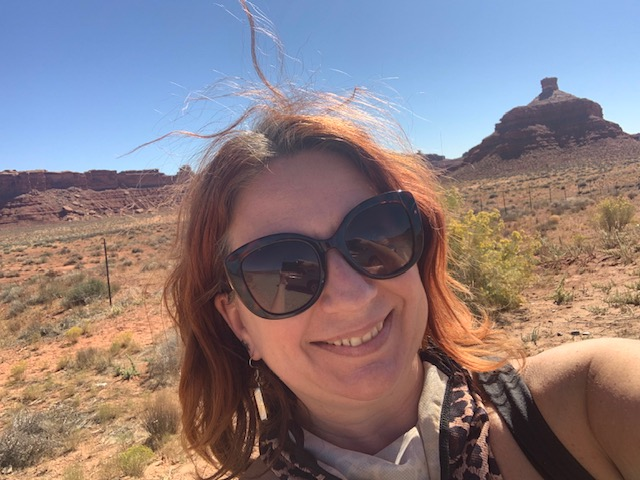 You can also never stop up the wonder that comes from this land. There is something deeply sacred, quiet, ancient and nurturing coming from the stones that stand over us in these valleys. It is awe inspiring to the point were you stop being able to find the right words for it. We laughed about how many times we said such poetically descriptive words as "whoa! cool! look at that!" to each other in the car. Another fun fact about this area is the Hollywood factor - especially for a girl who grew up watching Westerns with her Grandpas and Step-Dad. In this place, there were hills and plateaus I recognized because my eyes saw them on the movie screen in The Searchers, in Fort Apache, in She Wore a Yellow Ribbon, in How the West Was Won and funny enough in Back to the Future III and Thelma and Louise, among many others. If it were not Covid season the Visitor's Center would be open as would the Hollywood Museum, but alas - it is what it is, and we were going where we were going, and we would get there when we arrived. 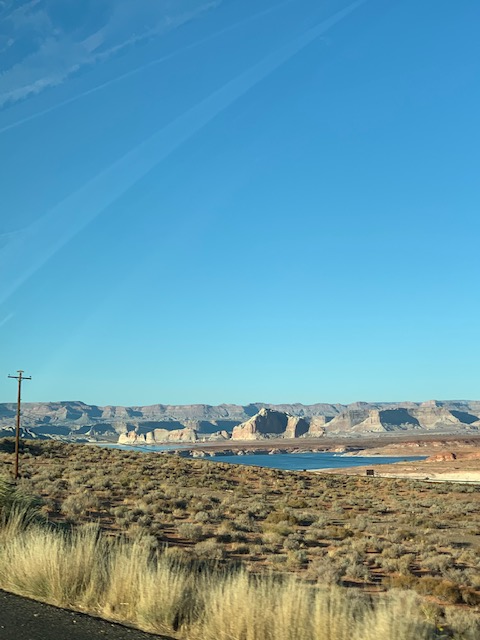 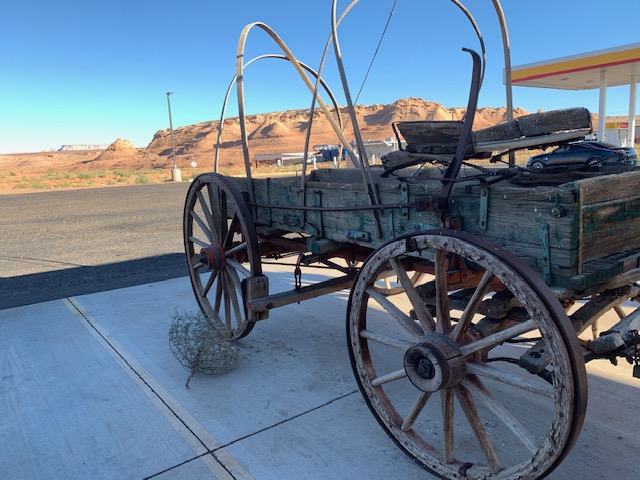 And so we continued, past Glen Canyon Recreation Area, past Lake Powell, and into the super cute Kanab, Utah (with a little bit of driving in Arizona in-between. We were lucky enough, in our last stop in Arizona, before driving back into Utah, to see this old wagon with a real piece of tumbleweed just sitting next to it in a gas station parking lot. You can't make these things up. 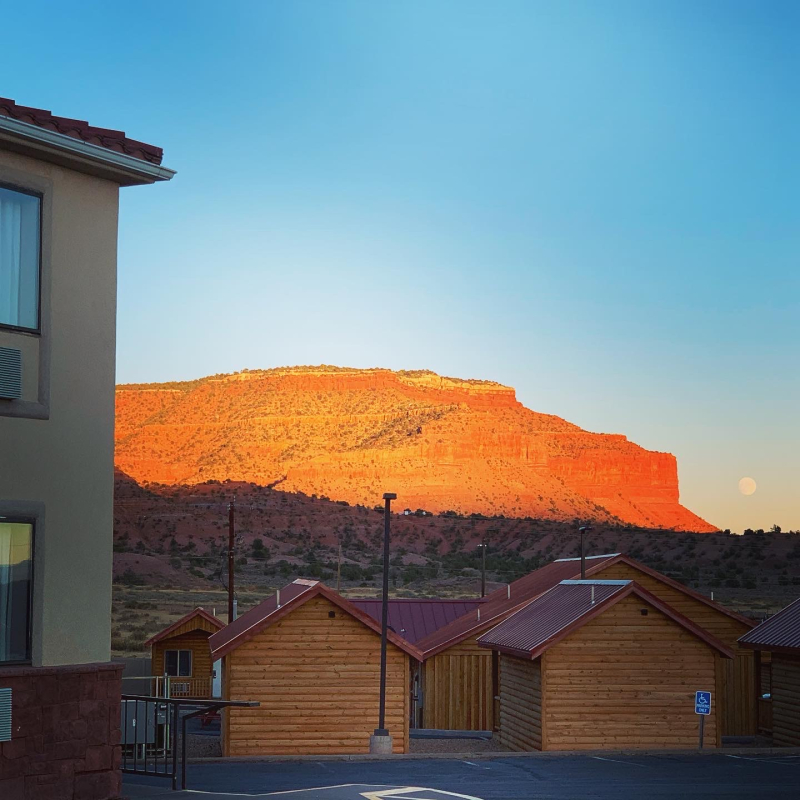 Our hotel in Kanab was situated on a hill overlooking this farm of little log cabins, with the red hills in the background - sun setting, moon rising - it was just beautiful. 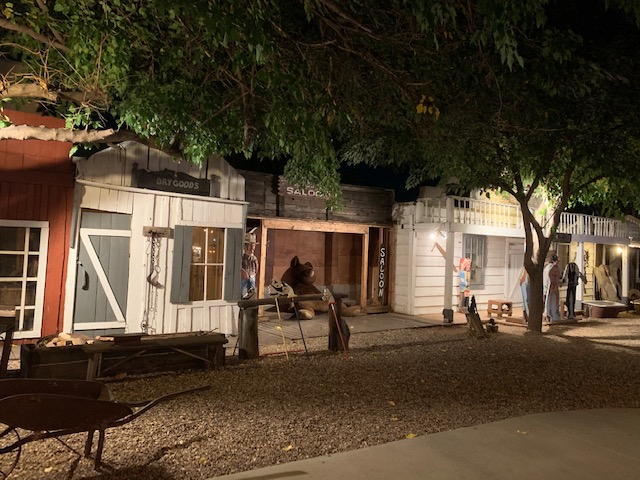 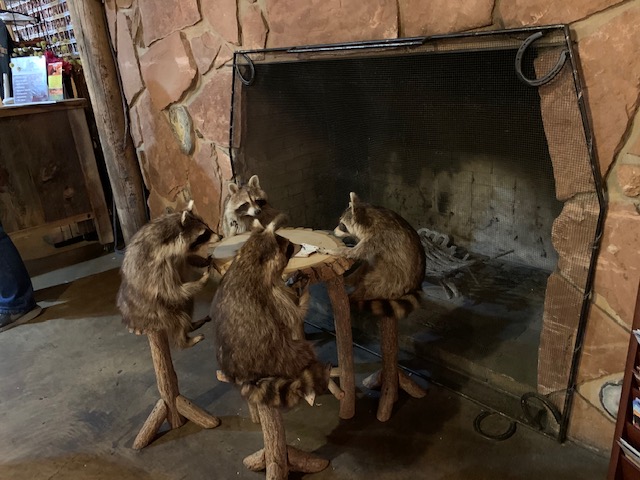 We ended the night having dinner at Iron Horse - a hilariously cheesy romp of a steak house done Chucky Cheese style but without the effective delivery mechanism of an efficient food delivery system.  The staff were all quite nice, however, as was the steak (when we got everything). The onion rings were cooked to perfection, and the hard fibrous vegetables were exactly what I was craving after four days of quick road food. 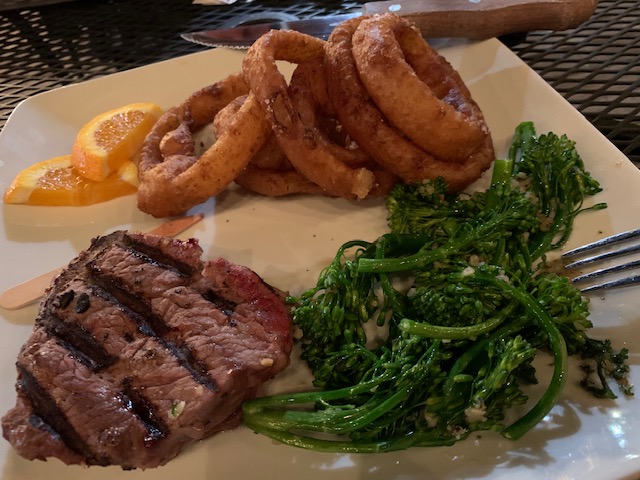 It was a nice end to a day of surprises and beautiful views.