Roswell for me has always been one of those places in the corner of my science fiction/fantasy interested psyche. I loved X-files, I watch Dr. Who, I recognize that I am a galactic being (as earth is part of a solar system and a galaxy). I don't think extra-terrestrial life is a problematic thing to recognize the existence of out there in the gigantic universe. Just this year, at the beginning of May, end of April the United States Government admitted that they have evidence of "things not of this world," (google it) so visiting Roswell to me, at this time, just seemed like the right thing to do. 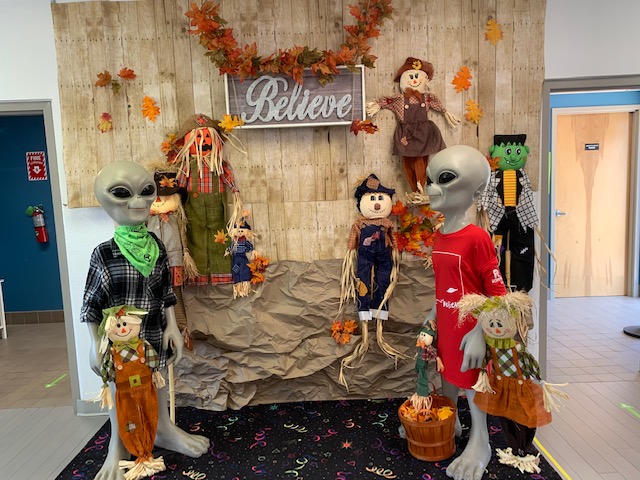 Roswell, New Mexico is really the middle of nowhere. Once upon a time, Roswell was the home of major military activity - WWII air force training, and post-WWII cold war missile silo action.  But since 1967 it has been a dead zone. There is a small military academy, but the rest of town is just a one trick pony tourist attraction focused on aliens (because of the "Roswell Incident") surrounded by a bunch of nothing. 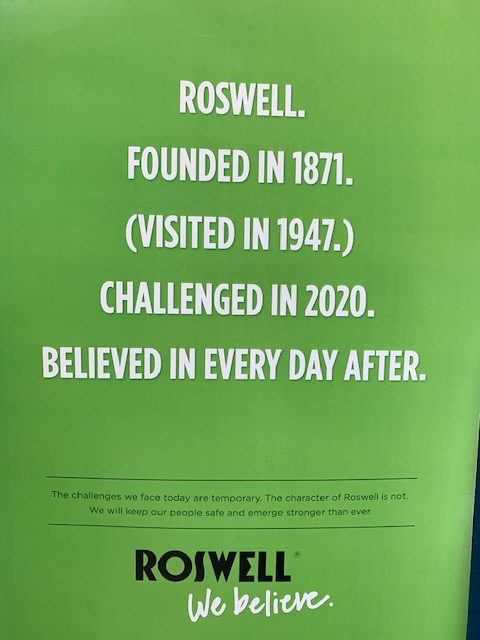 It was a perfect place to do a rest day on our very ambitious road trip, because neither of us thought we were missing out on anything. 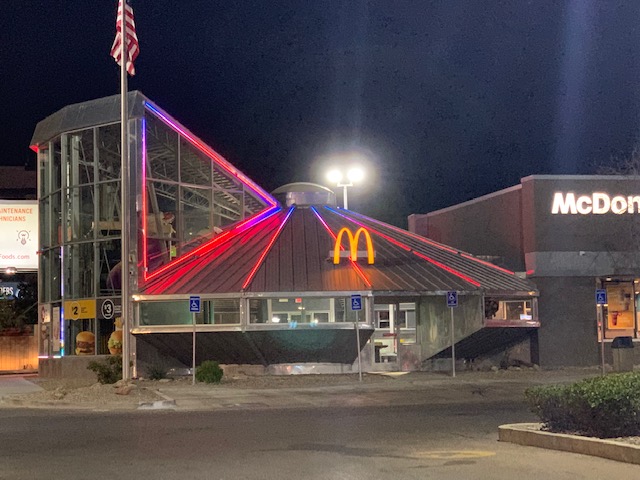 When we were originally planning this trip, I just wanted to go through town to take a picture of the McDonald's because it looks like a flying saucer. But then we decided to stay there, because museums close at 5pm and driving times, and furthest South location, etc..so it became of "turn around" location.  Part 1 of the trip - going to Roswell, part 2 of the trip -leaving Roswell, sort of thing, although Roswell was never really the point of anything. All that being said, here we were in Roswell for 2 nights so we could rest, do laundry, not drive over 200 miles in a day. So what really is there to do in Roswell? Take pictures of alien themed stuff and eat aggressively mediocre food. 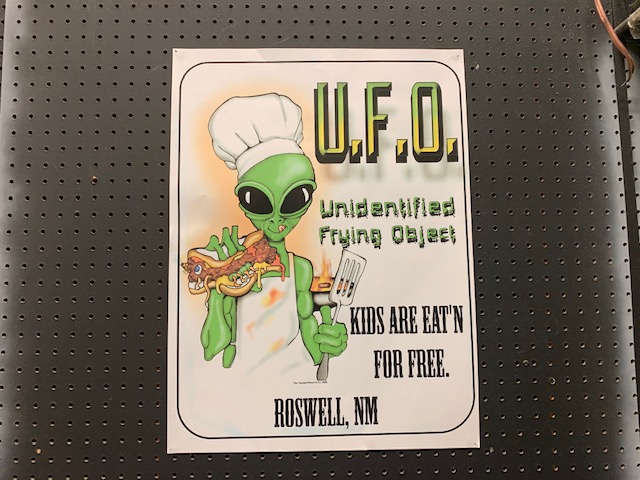 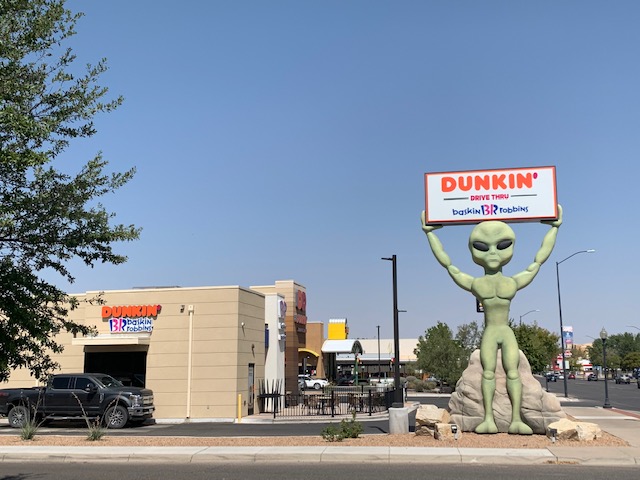 Aliens are thematically everywhere - on fast food establishments, on murals, on the bank windows, on and in the visitor's center, on at least one hotel, and on many, many, many pieces of merchandise. There is also of course, the museum. 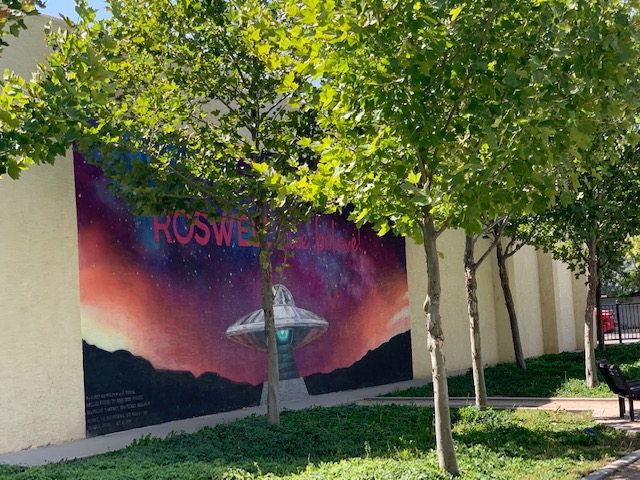 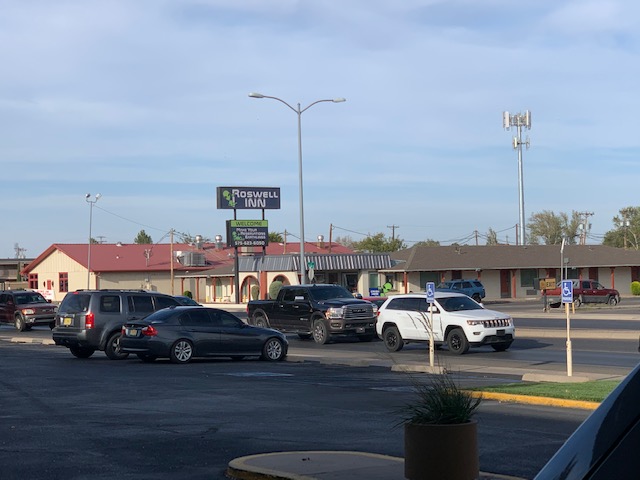 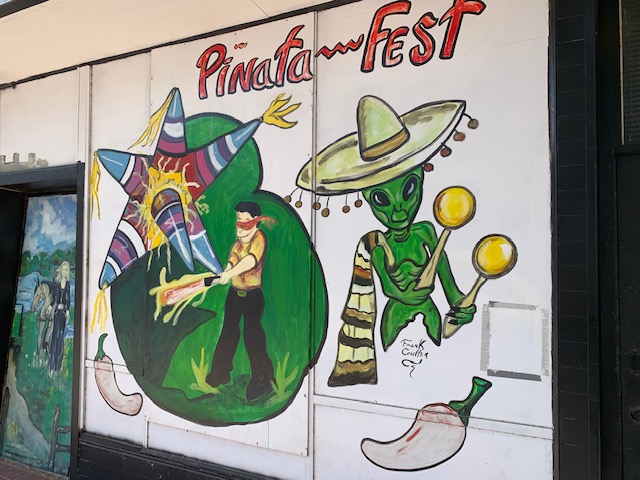 The UFO museum and research center is really quite an experience. 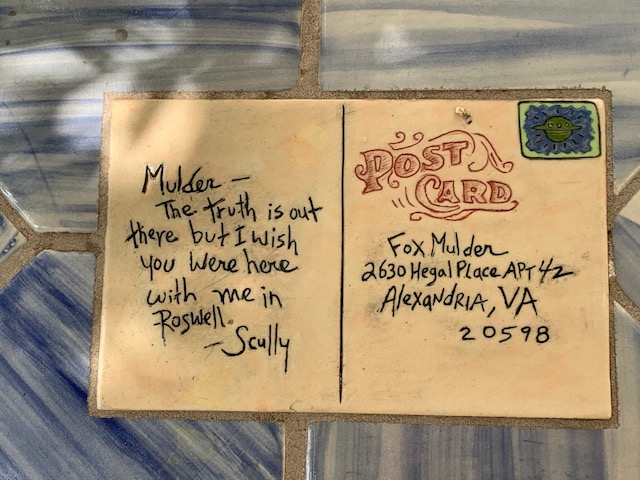 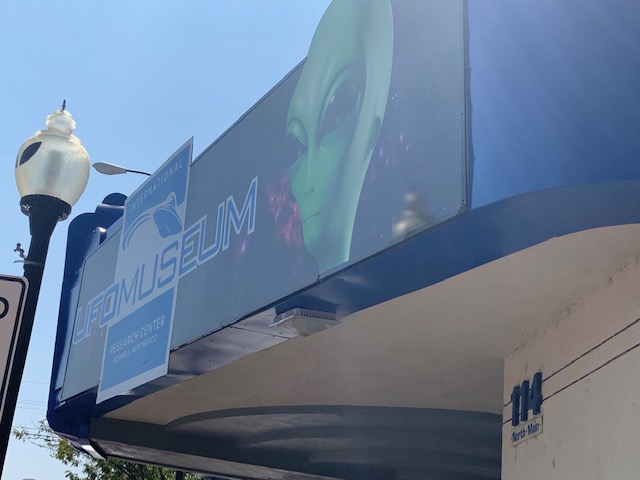 First, it has the most detailed account of the Roswell Incident in the world, with all of the first hand witness accounts, timelines, and details from the historical event and days following. Second, it has really large alien exhibits from movie sets, I believe. Third, it holds the library of all things UFO ever written or surmised about - and they are either on display or available upon request for the hardcore alien researcher. Some might call it a center of pseudo-science, but it is not my place to judge it, because it is at least very focused on what it is about. And as I mentioned above, no one has to convince me of the existence of other life forms in the universe. Now, while I was in the museum, I overheard a man denying the moon landing, which I found very ironic and fascinating. I listened intently to the lecture he was giving the two young men across from me at a particular exhibit. I just listened, they actually pretended to care. I found it curious however, that one would go to a museum dedicated to UFOs and research around that if can't even believe that humanity was able to send a people to the moon. 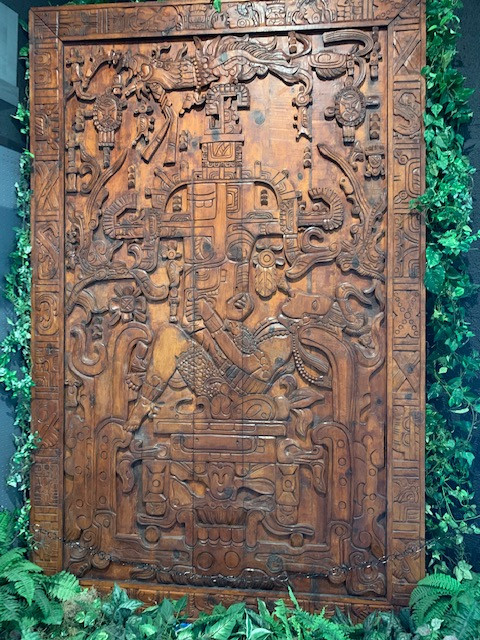 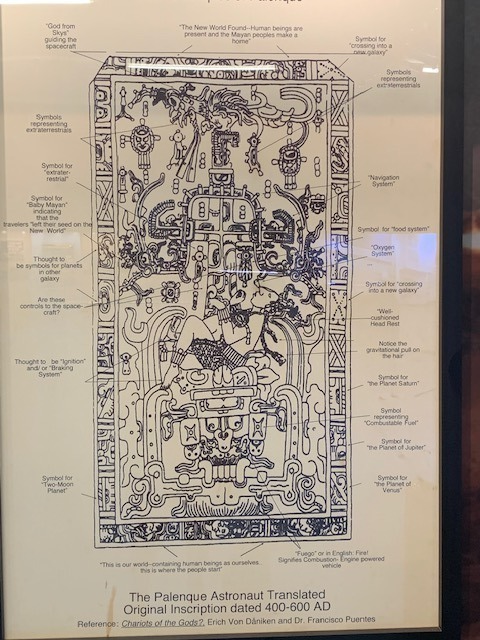 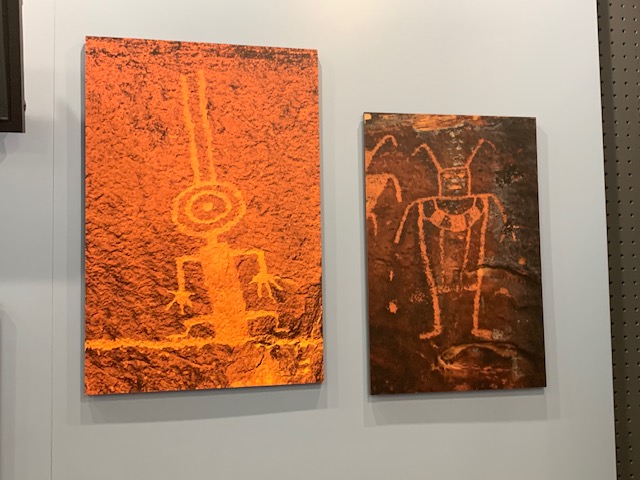 Besides the Roswell Incident, the museum gets into detail about ancient cultures interactions with aliens, including this amazing Mayan carving, as well as theories about the messages within the petroglyphs found throughout the United States with interesting pictures on them. It also covers first hand accounts, government accounts, the science of space travel, and a very extensive gift shop. 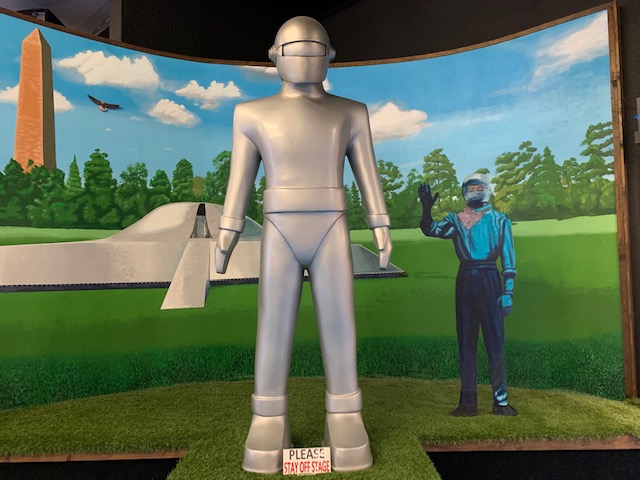 It actually holds quite a bit of information that can be overwhelming to attempt to read in one sitting. So if you ever plan to go, bring your patience and at least 2 hours to read everything.  The museum also covers the history of Roswell until at least 1967, when the military presence is officially closed with the decommissioning of the missile silos that were nearby. Here are some photos of the exhibit on the cold war missile program that was housed there. 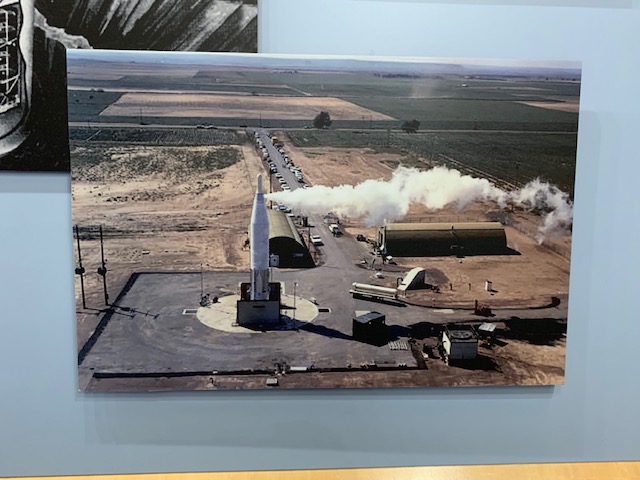 After the UFO museum we walked by historical city hall, and went to a late lunch at a local authentic Mexican food shop. We both ended up ordering the Chili en negado. 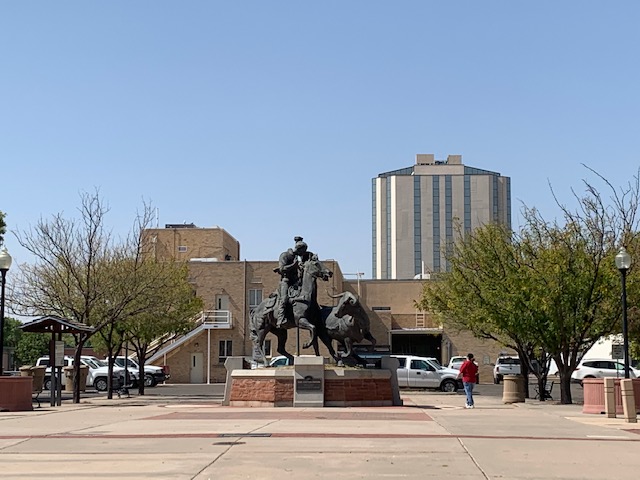 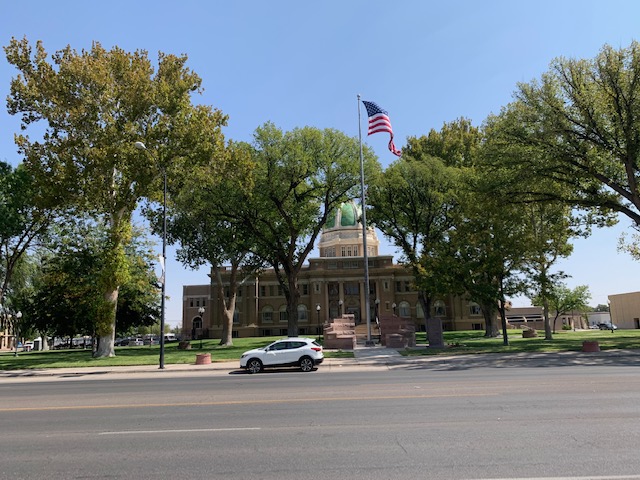 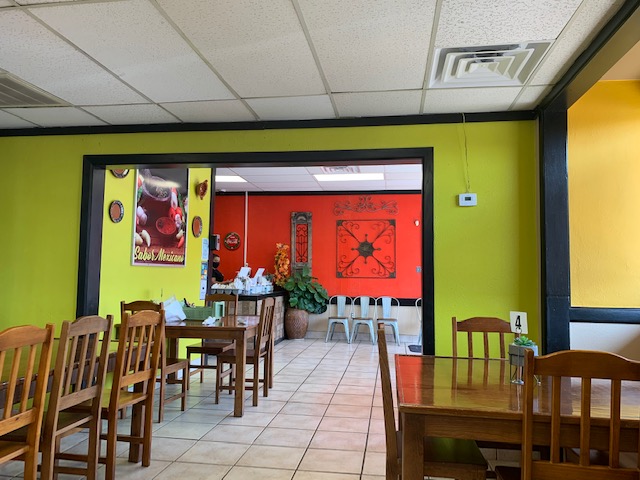 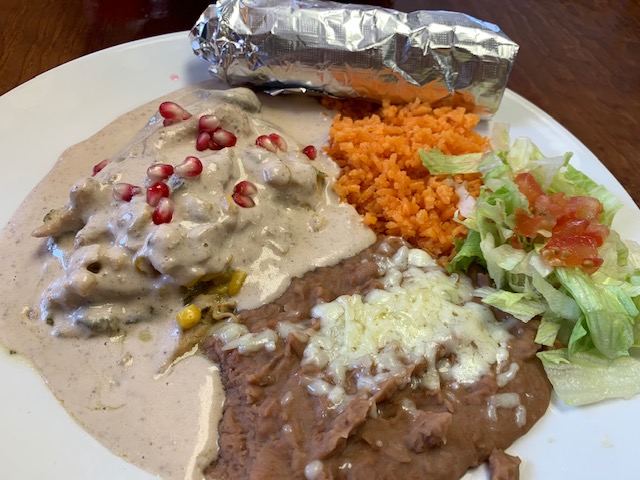 This was (despite my comment above about aggressively mediocre food) one of the best meals I had on this trip. This dish is a take on the traditional chili relleno (as in the steamed pepper kind, not the deep fried thing stuffed with cheese that you get at a "mexican" restaurant), it features the colors of Mexico's flag. The stuffing of the green chili is chicken some type of super umami cream, corn, onions and other unidentifiable but extremely tasty things, and then it is sprinkled with pomegranate seeds. It was so good and rich. I want more of this food available in my life. 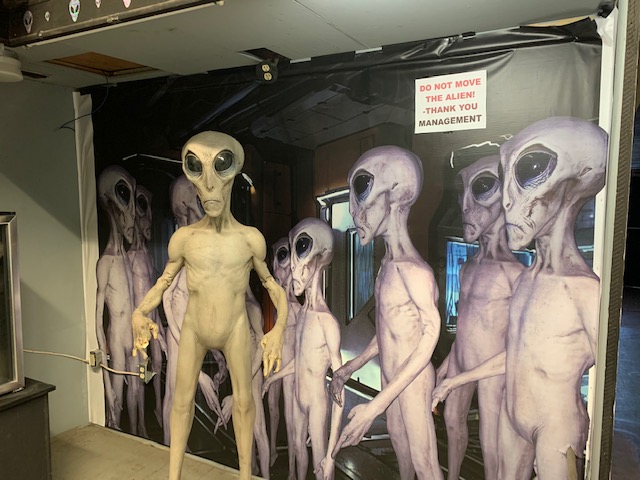 We explored a couple other shops and activity areas in town, just to see all there was to see to ensure we exhausted the open options within Roswell, then we retired to our respective rooms to do stuff and things. I worked on many things for my legal and project management clients that needed attention, because despite attempting to get everything done before the road trip, the legal world does not stop for my explorations - I just get to bring two computers where ever I travel.