To St Johns by Bus with Less than Ideal Weather

The Englishwoman we met on our first full day in Antigua mentioned that you could just walk out to the road and take the bus into St. John if you really wanted to go there.  Since we did want to go there, and local taxis charge you $14 to go literally 2 miles down the road, we decided that a bus adventure was totally the way to go to see St. John's Saturday market. 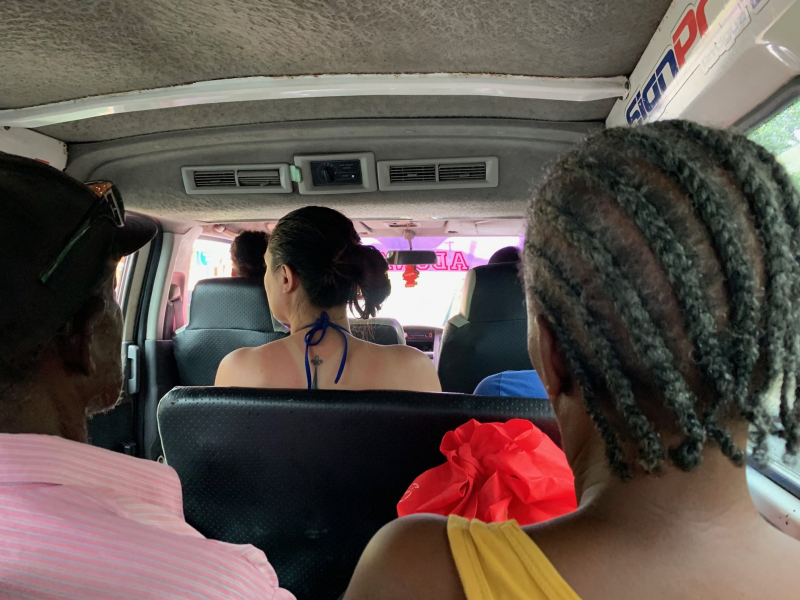 An adventure it was. There are not posted times for when the bus will come by. You just walk up and wait. Eventually a Toyota mini van pulls up and the side door slides open and you just hop in.  You do not give your money to the bus driver, you just find a seat, smile and join the ride. Our ride was playing some hopping reggae music and traveling at light speed over the bumpy road, stopping only when there was a silent signal, or a "hey-o!" from the back of the van. We observed people paying as they got off and decided that would have to be the way to go. 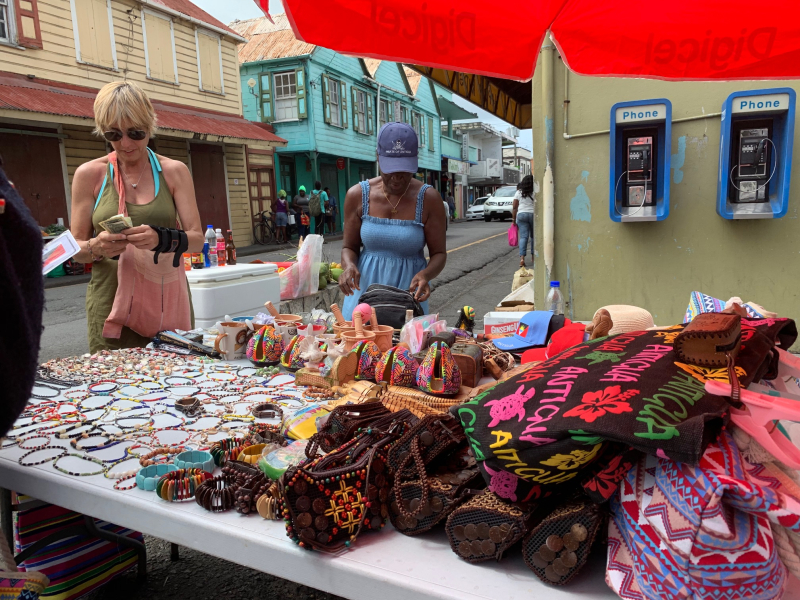 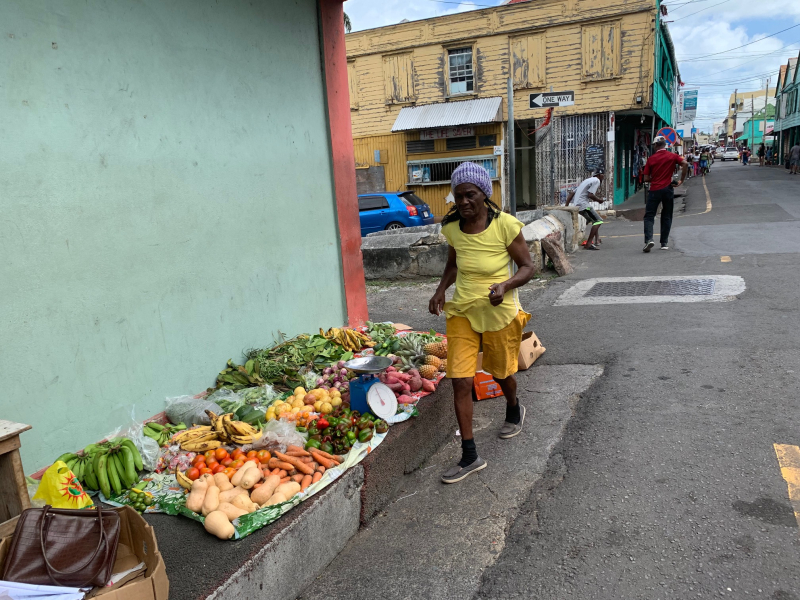 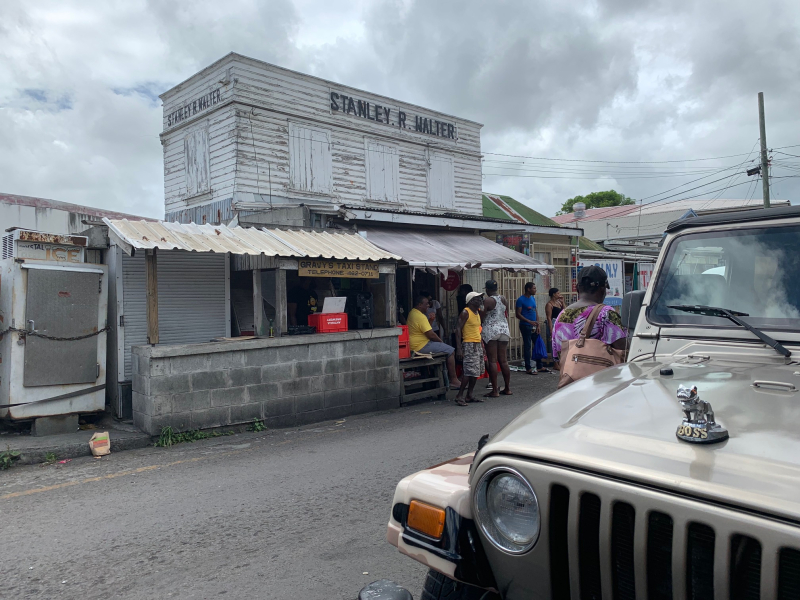 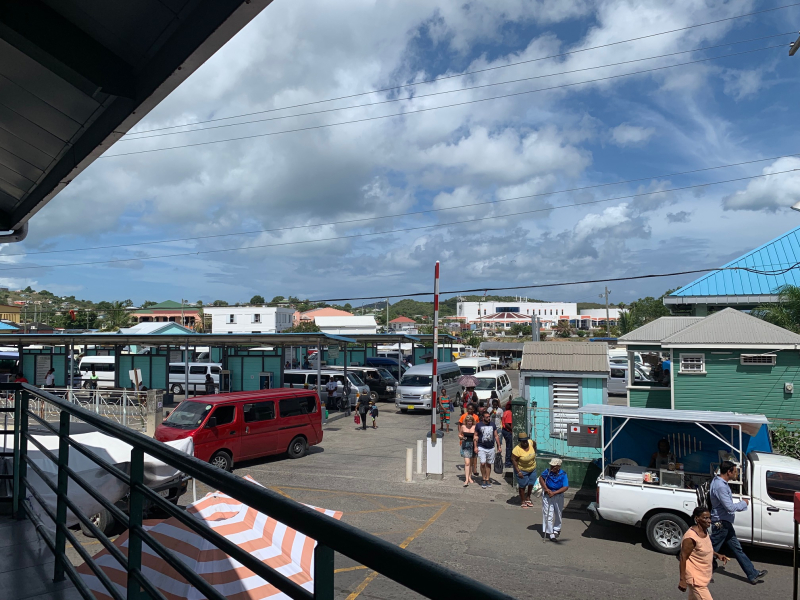 And then we made it to the city, to find ourselves in the center of a bustling reggae-ton and scripture blasting market filled with fruits, vegetables, whatnot, and thingamabobs. And people, living their life on the island - shopping for their food and wares, selling and dancing in the street.  It was a cash based economy and we were leaving the next day so there was no reason to buy anything - but I found a beach dress none-the-less. 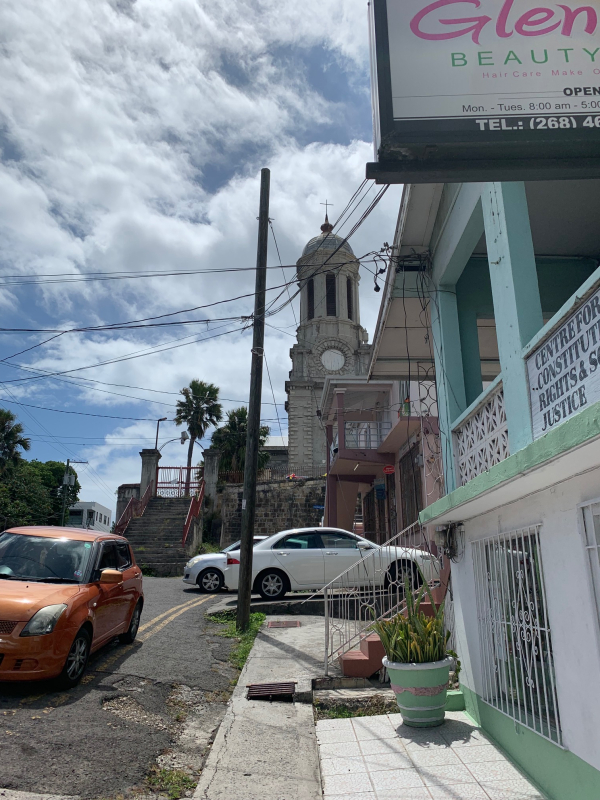 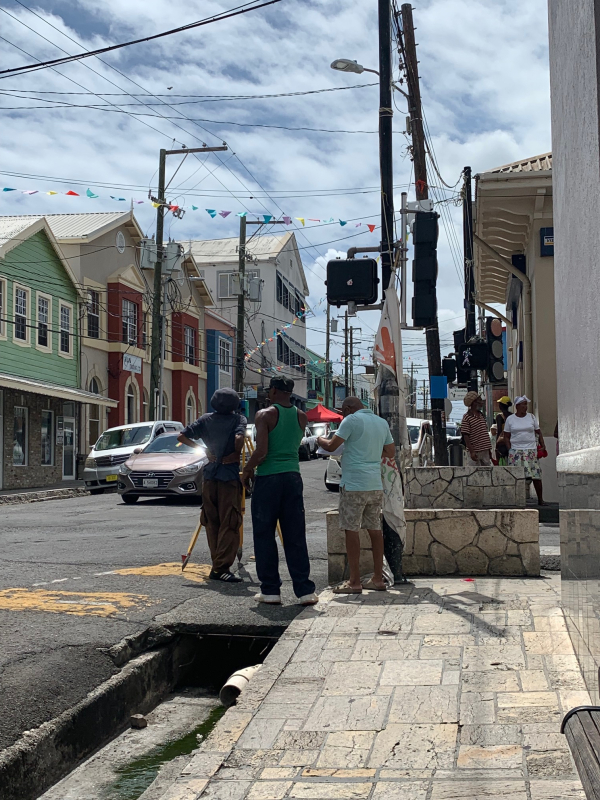 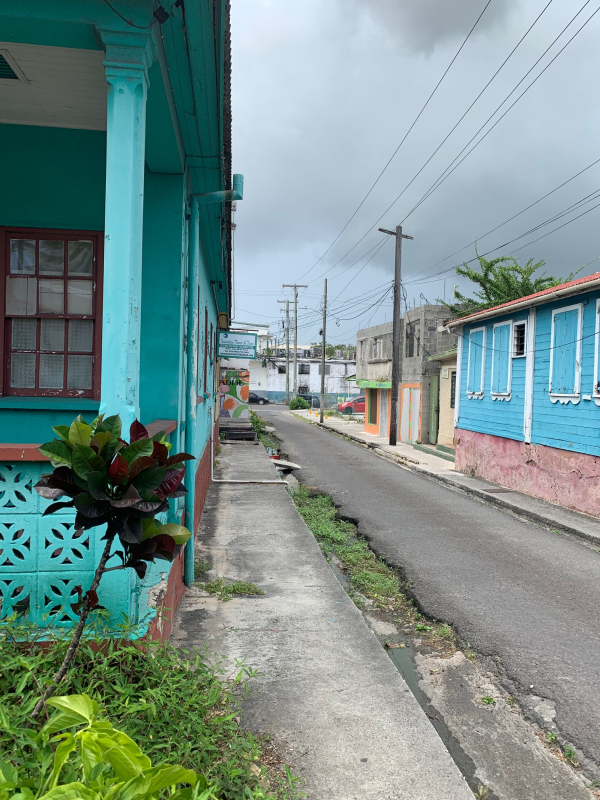 Tasha and I took in the colonial looking streets and sought a place to deep dive a little into the history of the place we were vacationing on over the last few days. The one museum was closed and the old church was boarded up. Historical tourism is clearly not a thing on Antigua (at least that is not the reason to visit St. John's, and no investment is being made in the infrastructure to change that). 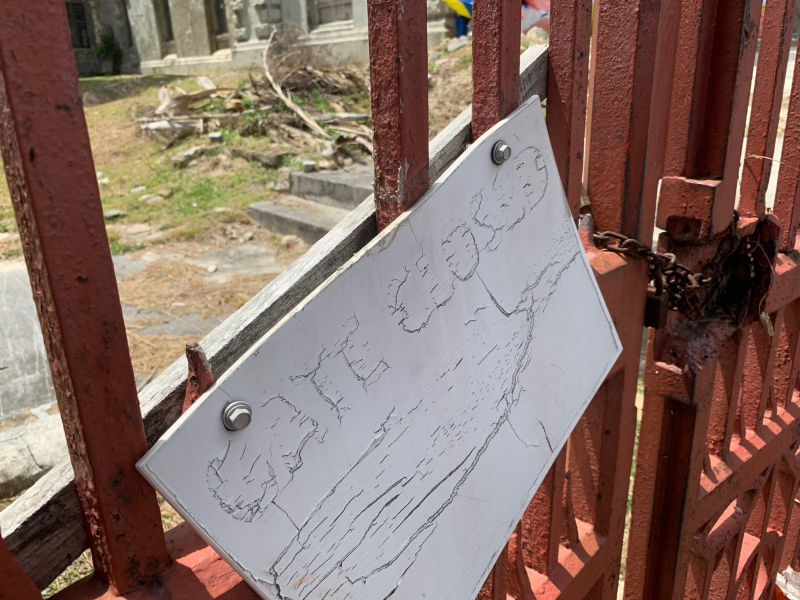 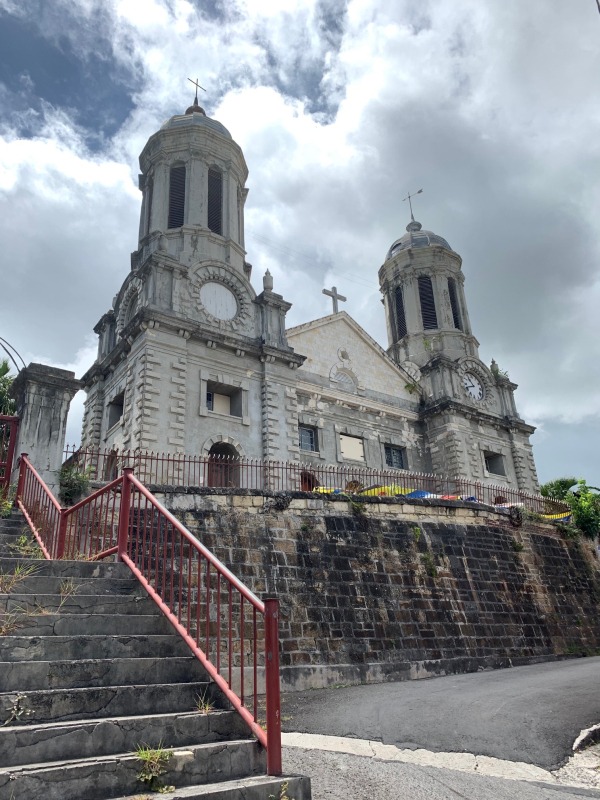 This is the oldest church on the island, and although it stands as a towering reminder of imperialism, colonization, and many other things I'm sure, it is also tells a story of poverty and priorities. The wealth that shows itself in the beach infrastructure is starkly different than the maintenance of the urban environment. Maybe, in a land of hurricanes, it is not worth investing in a city - or maybe, the money to invest in such structures just isn't there - because the cruise ships don't go to museums or eat downtown, they go to the beach and pay $10 for a coconut and $20 for a beach chair. 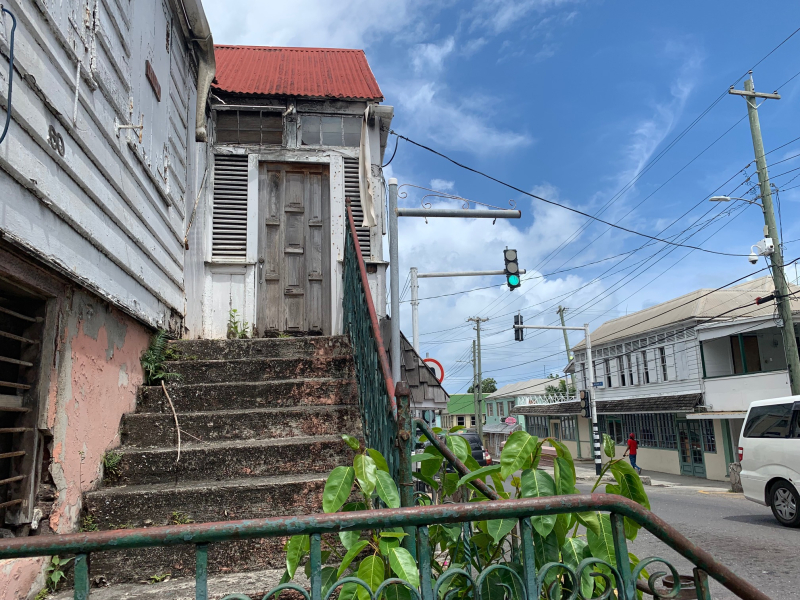 We did find a statue of the first Prime Minister/Governor - Vere C. Bird.  Who the airport is named after, and led the peaceful wave to independence from British colonial rule in 1981. 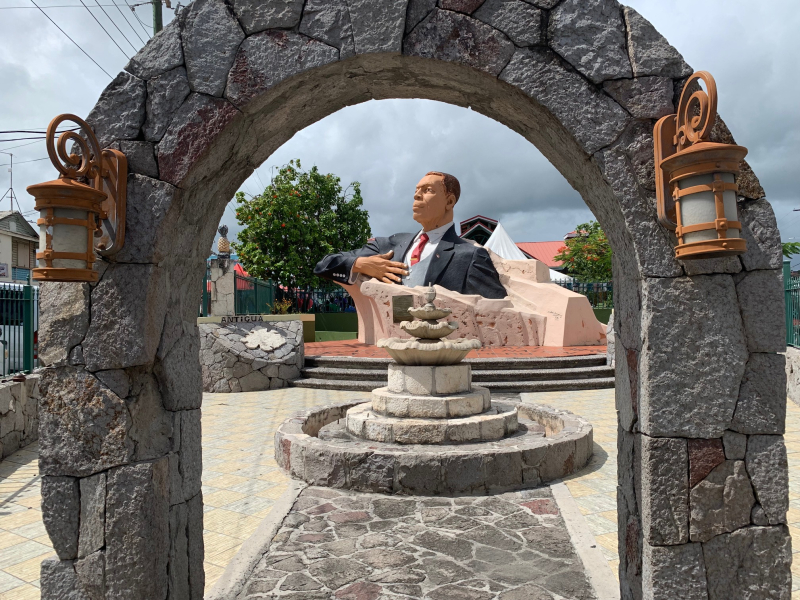 It is a very nice statue of him in the town square, even though the park is completely gated off - I had to take this picture through the locked metal fencing. As we looked for more history to take in the clouds started getting ominous, and the wind started blowing, and we realized we had made a complete loop of the area where pedestrians could explore St. John. It wasn't very big. So we started heading back to where there could be shelter - just in time for a down pour to begin. We took cover in Hemingway's and had a couple tropical beverages, 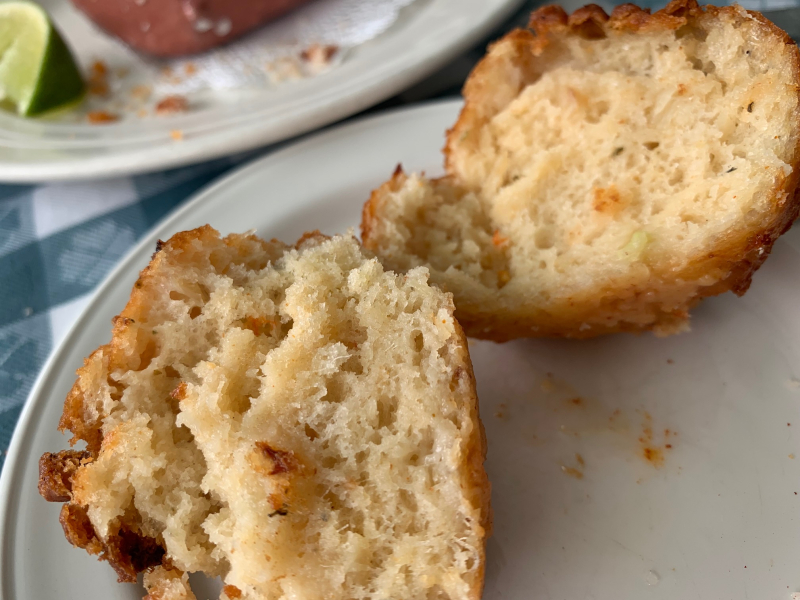 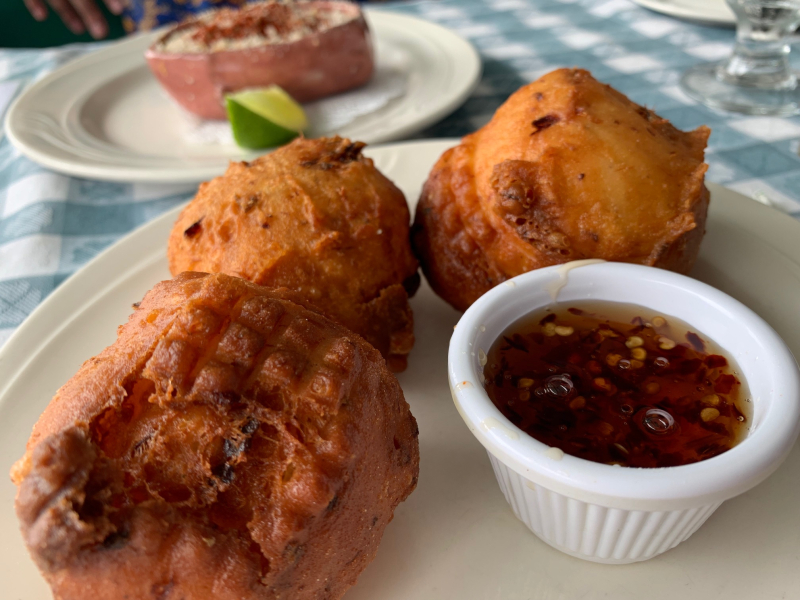 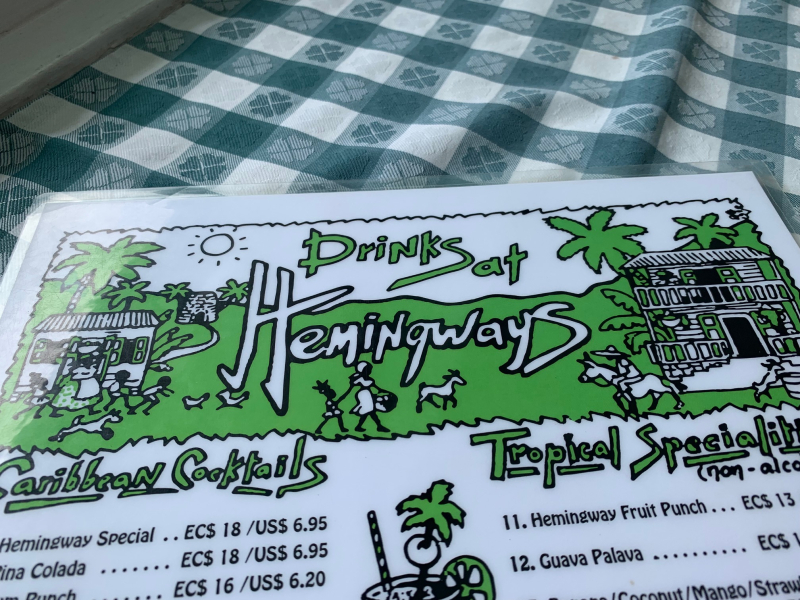 and yummy seafood based snacks, like the fish balls pictured above, while we took in the show across the street. 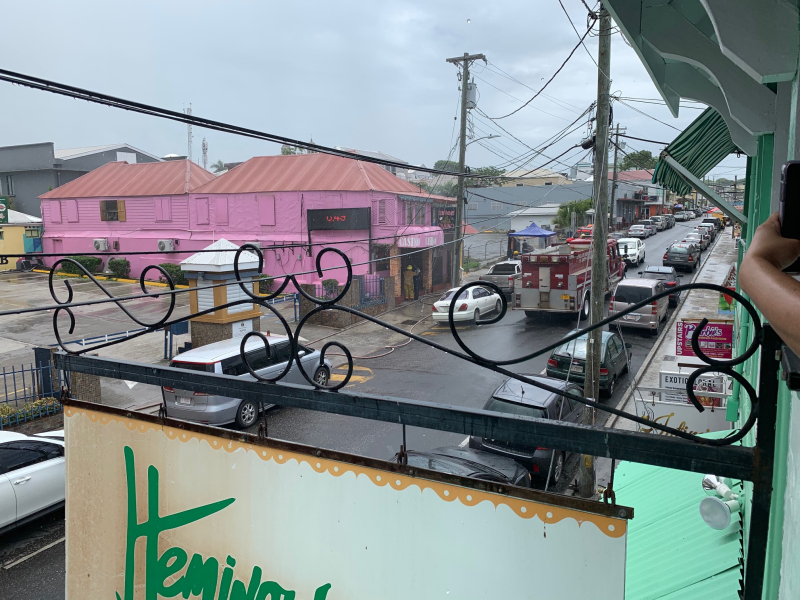 The local casino had a fire and all of the fire department was very occupied attempting to figure out where the smoke was coming from. Meanwhile, all of the persons were ushered out and onto the street. It was a curious operation. 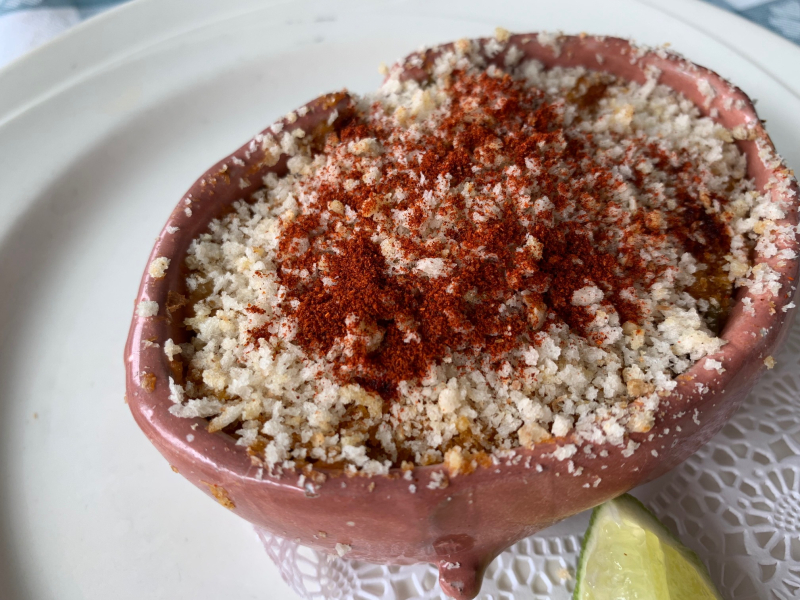 With refreshing juice on our tongues and tasty crab and fried fish in our bellies we decided to venture back out into the city now that the rain calmed down to find the docks and shopping district. We made it about 2 blocks before the rain started coming down at a tropical storm level. It was a waterfall from the sky. We stood under an awning for about 15 minutes watching the streets flood and people run to and fro before determining that perhaps our day in the city should come to a very wet closure. 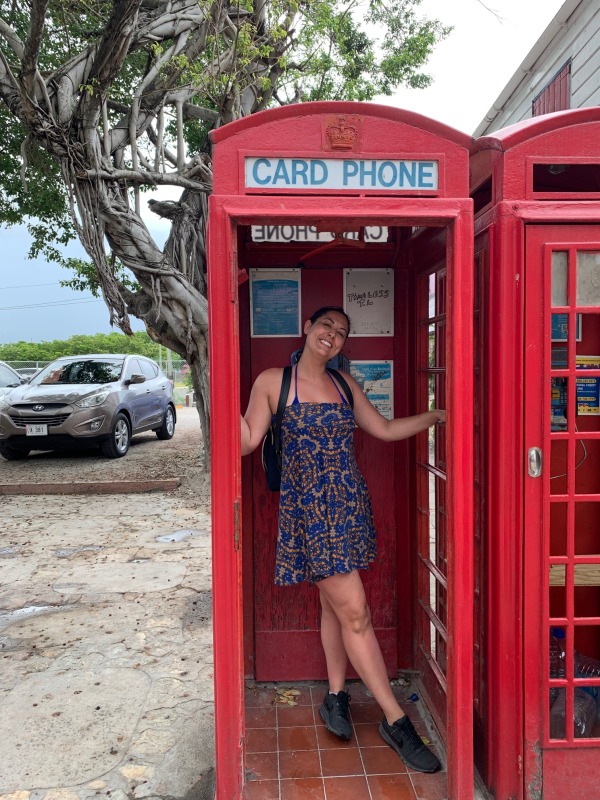 We hopped and skipped and ran and walked and generally got very wet wandering back to the bus depot to make the attempt to get back to our resort to find a hot shower, and some dry clothes. It just so happened as we walked up, the bus number that went past our little slice of paradise was just leaving and had two seats left. We made it. And so another small bus of bobbing heads, winding turns and reggae music began until we were let off in front of Jolly Harbour. 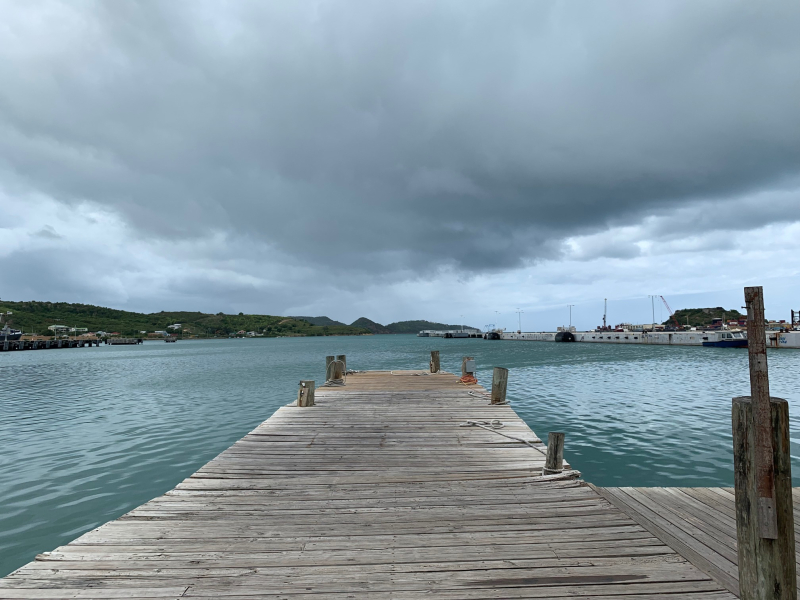