Diving into Island Culture Eating Poi and the Oahu Coast

Hawaii. The American colony. Oh, I mean state (but that is another blog post for another time) I find myself here on a whim - flying into Oahu because it was the right combination of ticket price, airline miles, curiosity and timing to get me to Platinum Medallion status. And I've never been to Hawaii. So ignorant of it am I, that I thought I was flying to the "big island" when I chose the Honolulu as an airport. Now, lodging on Oahu, or anywhere in Hawaii for that matter, is super expensive at this time of year - because apparently everyone goes to Hawaii for the Christmas holiday. This never occurred to me, until I had already purchased the plane ticket and was looking for a place to stay. Island beach retreat not at my financial disposal - I chose to dive in head first to island culture and stay in a North Coast hostel/commune shared house for a phenomenal deal.  On this budget I could afford to rent a car and drive the island to take in as much as I possibly could in my 48ish hours on the ground. Choosing the hostel would also allow me to meet some "locals" living on island time and further dive in to the experience. All great in theory. I'll spare you the details of the flight. It was six hours (just an hour shorter than a direct flight to Iceland). I breezed off the airline, into the Honolulu open airport, picked up my bag and walked right up to my rental car shuttle.  Easy-peezy. 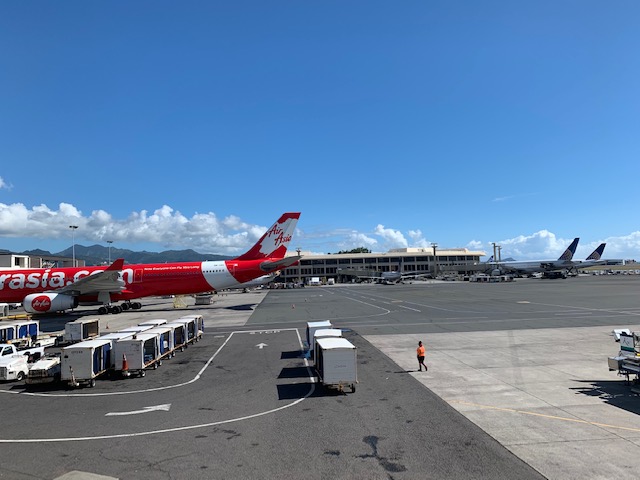 Then my shuttle pulled up to the rental car establishment and the driver said "It is busy, just put your name down and take a seat, it will be a while."  I got out into the hot sun of the Oahu afternoon in my black dress and leggings and took in the scene. Humans sprawled out on benches, waiting on the curb sitting on luggage, a family with 4 kids receiving a pizza from Uber eats to damper the crying hunger pains - this was promising. I walked up the ramp and entered the office, moved the bored child away from the sign up list and saw that there was at least 15 people in front of me. I looked around and could tell which ones were counting the multitude of minutes they were stuck sitting in the sticky sunny Hawaiian sunlight for their opportunity to check out a rental car. 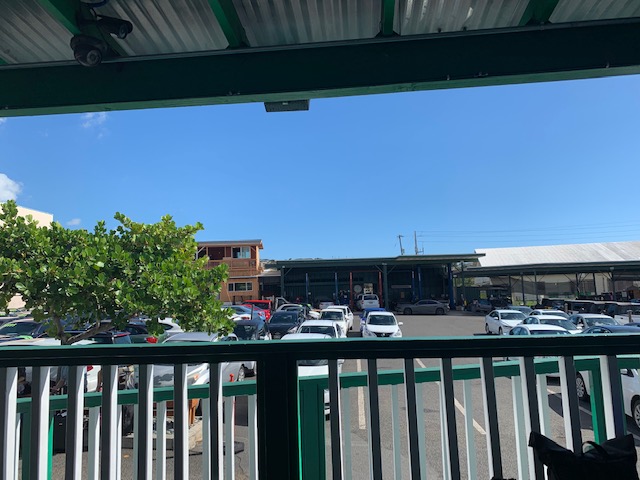 I watched the minutes tick by, and the window to get a real Hawaiian style lunch in the Honolulu area close (lunch places close at 2pm). And then finally, after about an hour, my name was called and my car assigned - a car without a USB port! Luckily, Target was across the street and I could get myself a radio tuner phone thingy to create a voice for my GPS.

Half a day gone, a car in hand, starving and a bit flustered by the adventure into the post-Christmas Honolulu Target - I decided it was time to just leave the city and dive into the island itself and leave the tourist sands of the South shore behind.  So my  destination became the Waiahole Poi Factory. 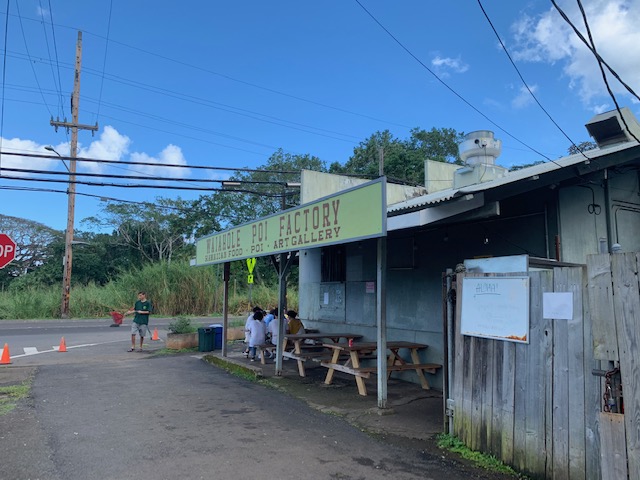 Poi is made by crushing Taro root, and in the pre-colonization period of Hawaii poi was a staple of the native diet. It is believed that during this "pre-contact period" before 1778 when the first white guy showed up exploring, that the Polynesian explorers brought taro, sweet potatoes, coconuts and pigs with them to the island for agriculture and sacrifice (the pigs). After 1778 others bring in sugar cane and pineapple took over, as did American colonization under the corporate yoke, and eventually military domination to protect those corporate interests. But back to poi, the former most cultivated food of Hawaii. 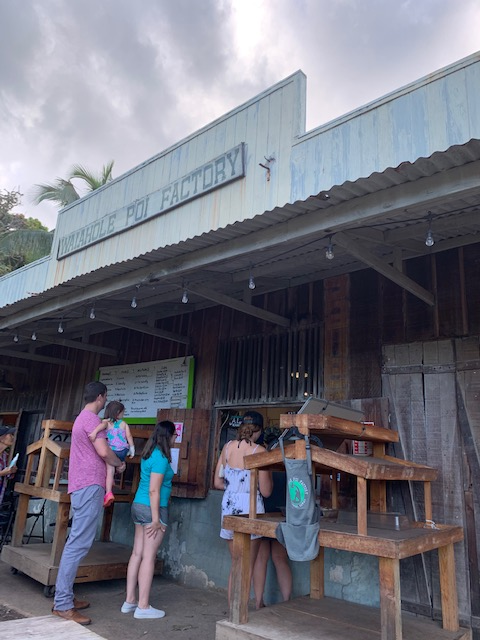 According to The Eater, the Walahole Poi Factory is one of the few traditional Hawaiian food establishments actually owned and run by native Hawaiians. The photos online of the dishes and the poi, are not what are handed to you at the establishment, but the quality of the food is certainly rings through the white styrofoam. 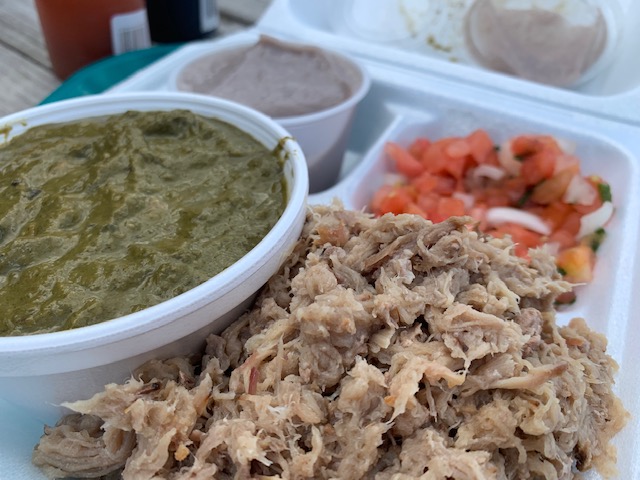 The menu is just a list on the wall, and being new to the experience I had no idea what to order, or how to eat it.  No one helped me either. The young man who took my order made a recommendation and description of the options - which I chose the Kulua Pig and the Luau Squid combo with poi (of course). I was provided a container of things with no instructions on how to eat it - so I just dug in to find some of the most delicious and rich flavors. The pulled pork was savory and salty with a smokey depth I hadn't experience in any American Mainland BBQ, and the squid (which was really a green soup) was delicious and delicately tasting of greens and seafood at the same time, but not fishy in any way. The poi on the other hand, which I have since found out I was supposed to mix in to everything, alone tasted like paste.  Literally, like eating paste, or perhaps even glue. It had a soft paste texture, and a simply put a soft paste flavor. I put the hot chili sauce and shoyu in it, and things improved. But I was certainly sure I was doing it wrong - I just didn't have any examples around me as to what was doing it right. I ate what I could of the rich and filling plate then got a bag to carry the rest for a late dinner when I got the the hostel. 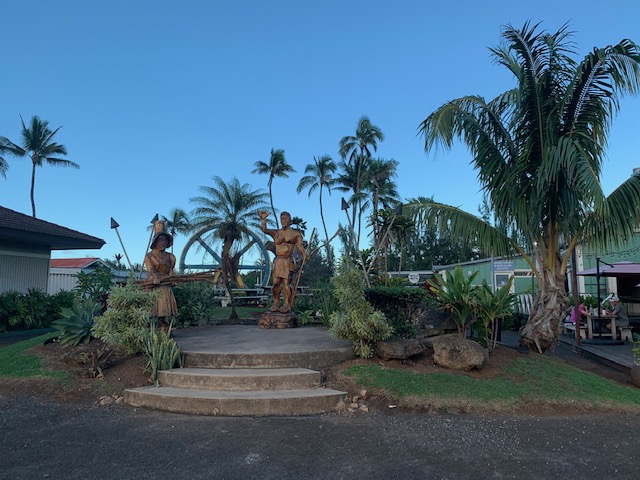 I got in the car and headed north. My phone didn't have service, and I had no destination other than eventually getting to the North end so I just drove, stopping where ever there appeared to be a good view. Which meant I was stopping at every beach with a parking spot, or that seemed safe to pull over ( I couldn't quite figure out where it was legal, illegal, unsafe, or no one cared for most of the way). 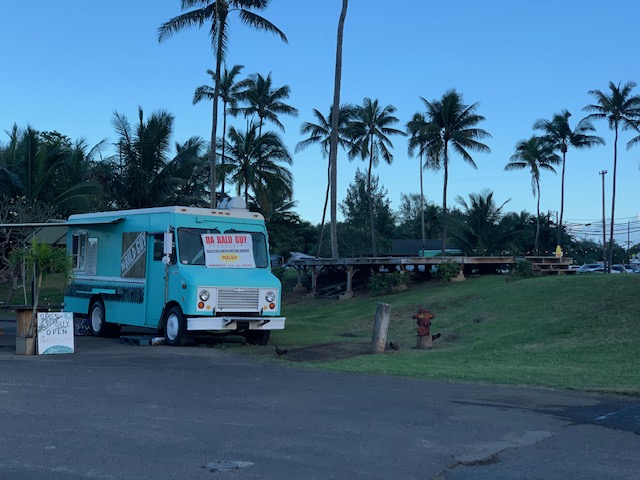 It was really clear that this portion of the coast was not a tourist destination (as a portion was just local with hand made signs stating "Keep the Country, Country, No Development!") And as traveled further North, I was in surfer destination world. Here are some shots from the beaches up the island. 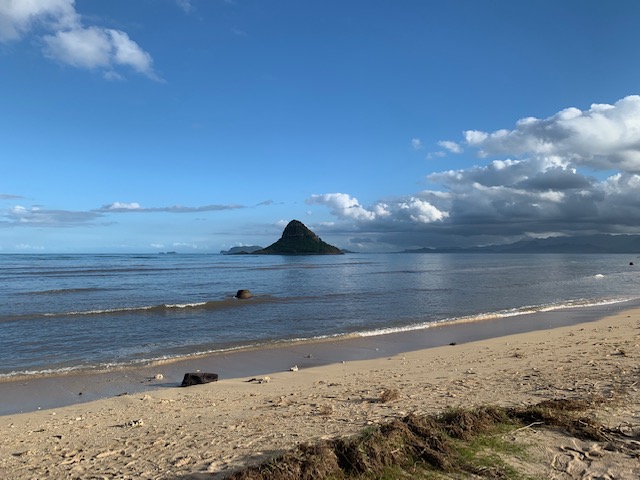 I got to the North end of the island just in time for sunset. And was able to record a surfer catching a wave in the pink and orange skies of the sun setting over the Pacific behind him. But this blog platform doesn't allow me to post videos so check that one out on Facebook. Below is the still shot. 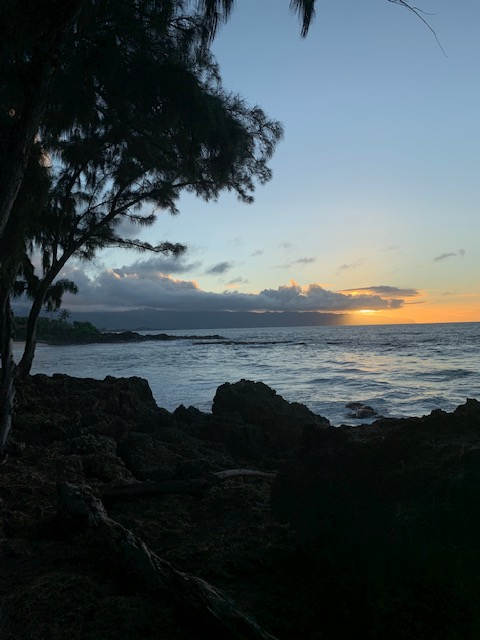 After sunset, I got back into my car and sat in beach traffic coming and going from the North Coast, as it rained. It felt like I never left Seattle for a second (except that I was surrounded by tropical beauty).

Just after dark I pulled into "Uncle Blake's" North Coast hostel/commune/surfer/hippie chill out zone and was welcomed by a table of lovely strangers speaking  about gratitude.  Not wanting to interrupt them I did a loop of the house and could not for the life of me figure out where my bed slash room was.  So I asked for help and was shown that wall opened up to a bunk room (which was just that, a bunk bed - no pillow, no towel, a blanket - which was a plus) and then the roam of the house which had a cool porch, living room and kitchen decorated in fun murals and "eclectic" collections of furniture. Oh, and cats, many, many, cats. 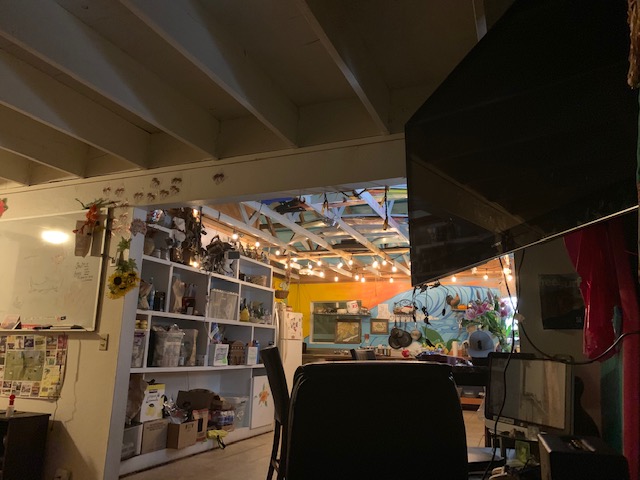 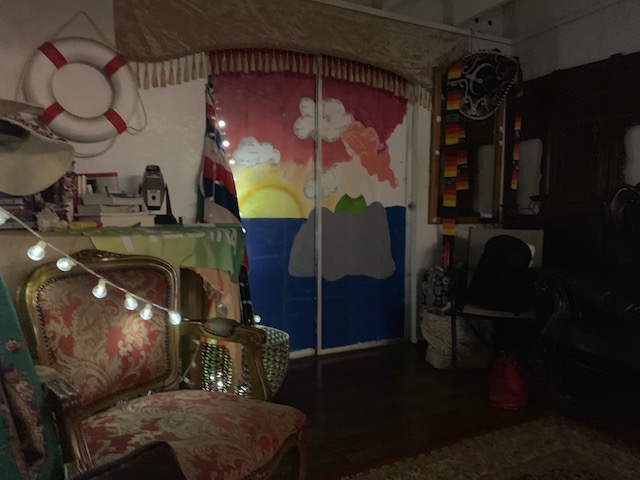 My housemates, were all leaving the next day, or immediately it seemed, however, there was a good crop coming in. "There is always coming and going."  Said one of the long term residents, a surf instructor originally from San Diego. I was greeted warmly, as many hands and hugs were extended, it was clear I would be one of the few women at this place, the rest were a strange collection of Europeans, surfers, snorkle/adventure tourists, a very high sports addicted former attorney from New York, and the host, who actually lived here full time.

I did my best to inculcate myself into the conversations, but ended up sitting with my computer and writing for some time before I really picked up with a group of folks to actually talk with. I ended giving rune readings for late into the night - capping it off with conversation with a man from Sydney about owls and signs from the spirit world. "That's so deep!" was heard more times than I can count. I just replied "That is how I roll."