Adventure to Copper Harbor at the Top of the Keweenaw

The Keweenaw Peninsula is the Northernmost point in the Upper Peninsula of Michigan. Copper Harbor is the last stop by water and the home of a Fort and a lot of history that involved copper and fur trading ruffians. Now it is a summer cabin and vacationer paradise filled with views, lighthouses, beaches, and rock picking. 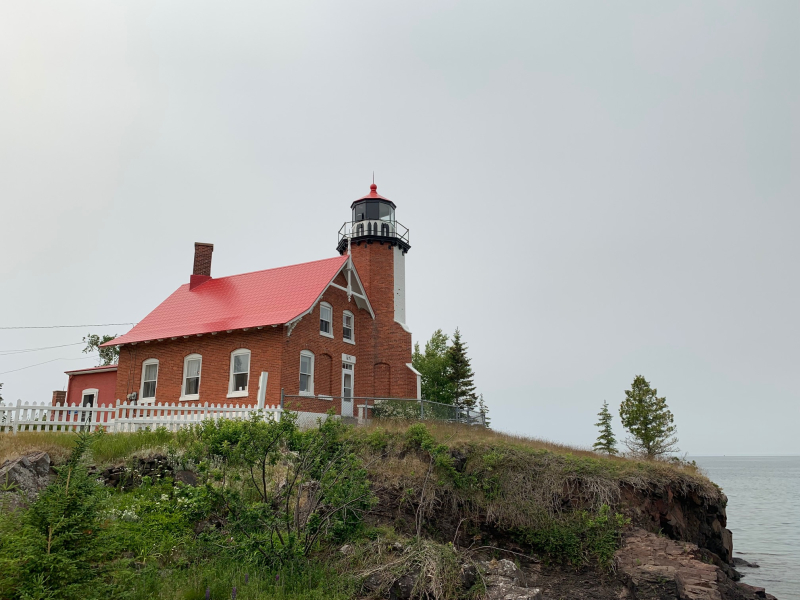 At the top of the Keweenaw, looking to the Copper Harbor lighthouse, the interpretive sign says "By the mid-1840s Copper Harbor became a rough and tumble mining camp, where one visitor recalled "the restraints of civilization sat loosely on men." Copper Harbor and the other nearby pioneer settlements, like Eagle Harbor whose lighthouse is pictured above, relied on lake transit for transportation, communication and supplies - so six months out of the year they were completely cut-off from the outside world. 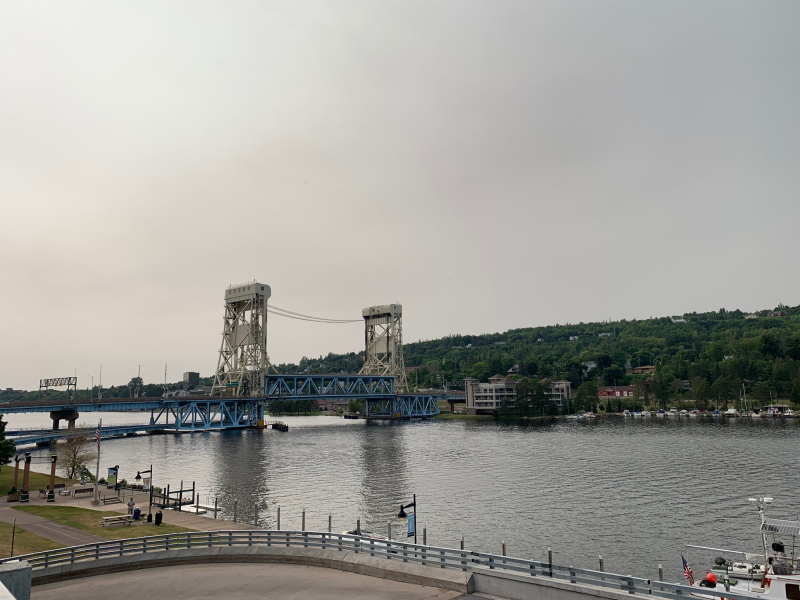 Today, we just drive up on an afternoon in a newly minted rental minivan. It being my last full day in the UP it was time to go get my transportation for my journey to Green Bay's airport on Monday.  Monday evening I had a flight to catch to get to my next remote location, Antigua. More on that later.  So Russell, myself and my Mom drove up to the Houghton airport to pick up the car. If anyone ever wants to travel directly into Upper Peninsula Michigan know you actually have two choices - Houghton, on United, twice a day from Chicago, or Marquette via Delta, once a day via Minneapolis. No one will ever tell you this as I don't even think the airlines know that they service the two areas. Our first stop was Calumet for a little lunch as both my mother and I were getting cranky. The Keweenaw Coffeeworks luckily just started serving lunch so we had an option on a Sunday afternoon (everything else in town was closed). 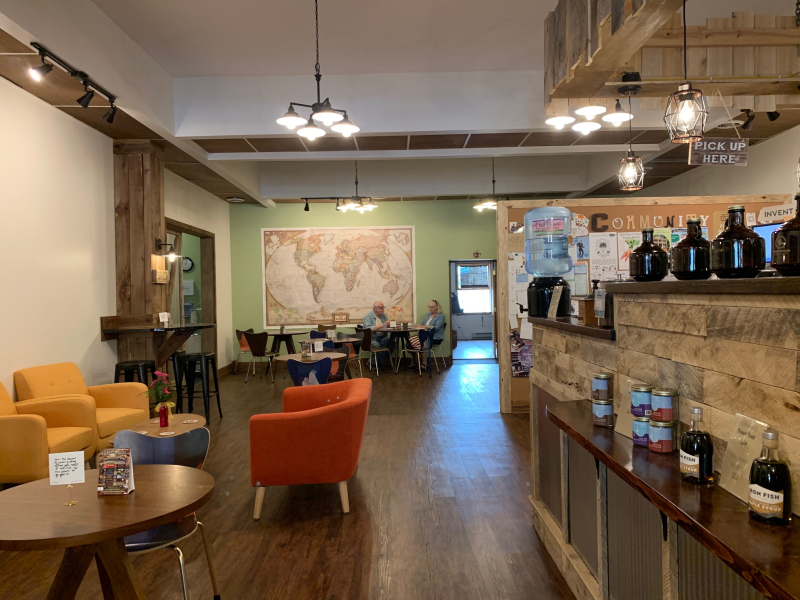 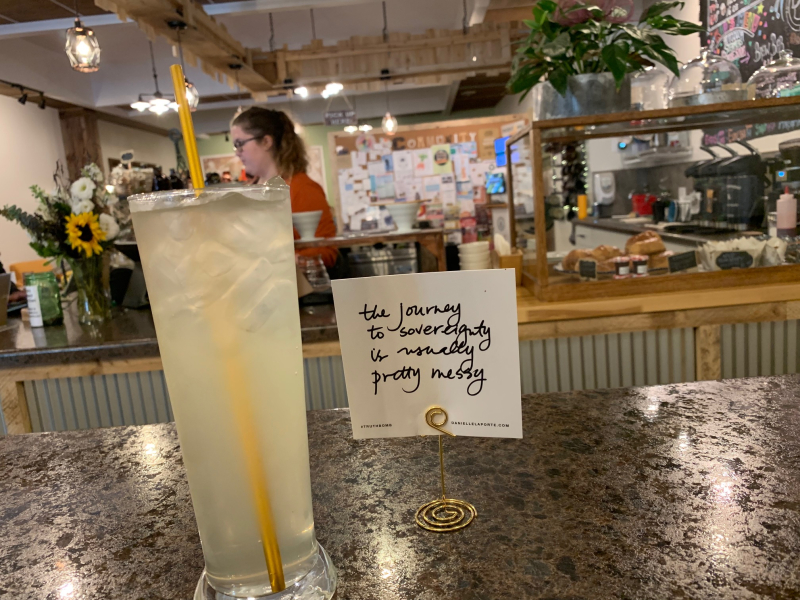 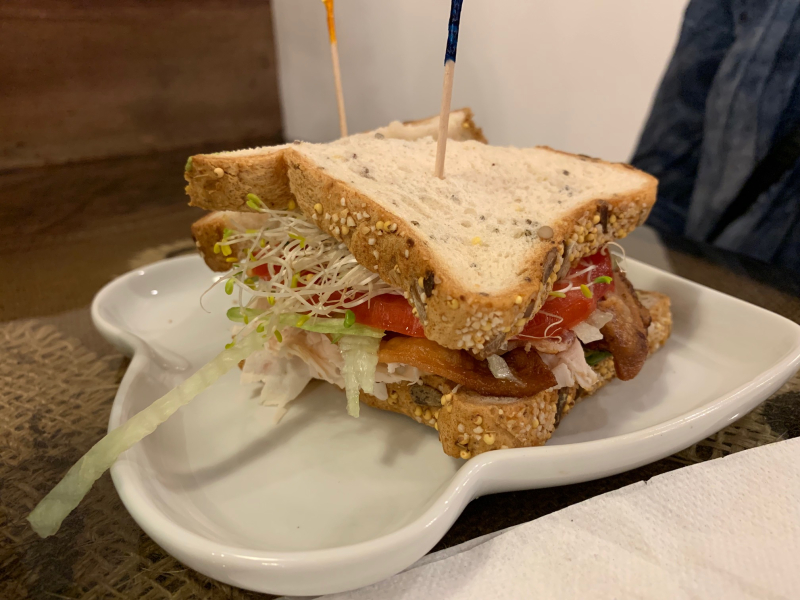 The Keweenaw Coffeeworks is a lovely little establishment with oat milk lattes, gluten free bread and sandwiches that feature bean sprouts. It also has house teas and homemade lemonade and house made root beer. It is servicing the crowd who comes to town for healthcare and likely some young people trickling up from the college. If for some reason you are ever passing through Calumet (pronounced Cal -You- Met) you should stop there - keep them in business. The coffee is great. 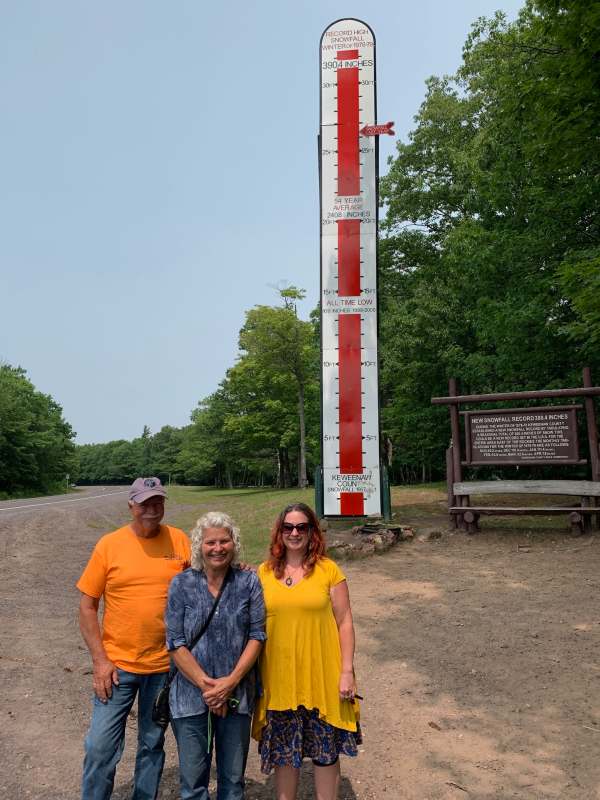 Next along the journey is the snow record meter. The greatest amount of snow for the area ever is 390.4 inches, that happened a long time ago - but last winter is marked with the red arrow - it was 24 ft. and over 300 inches. Nothing to dismiss. And somehow the area keeps functioning (even though I would argue it is cut off from the rest of the world for about six months still to this day).

We had some complete strangers, also taking pictures of the snow meter, take our family photo in front of it, that is why we look so cute. 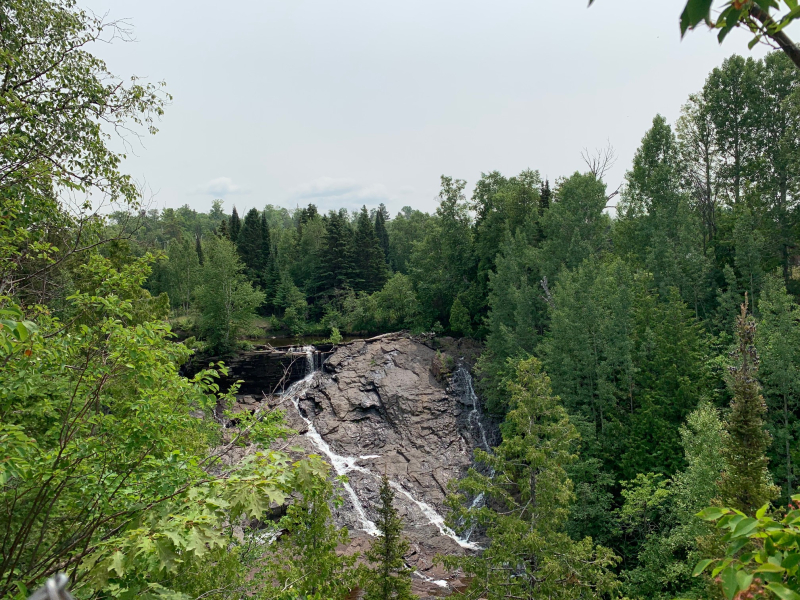 Then there is this waterfall just across the street from the county seat, and then up the road just a little ways is Jacob's Falls. 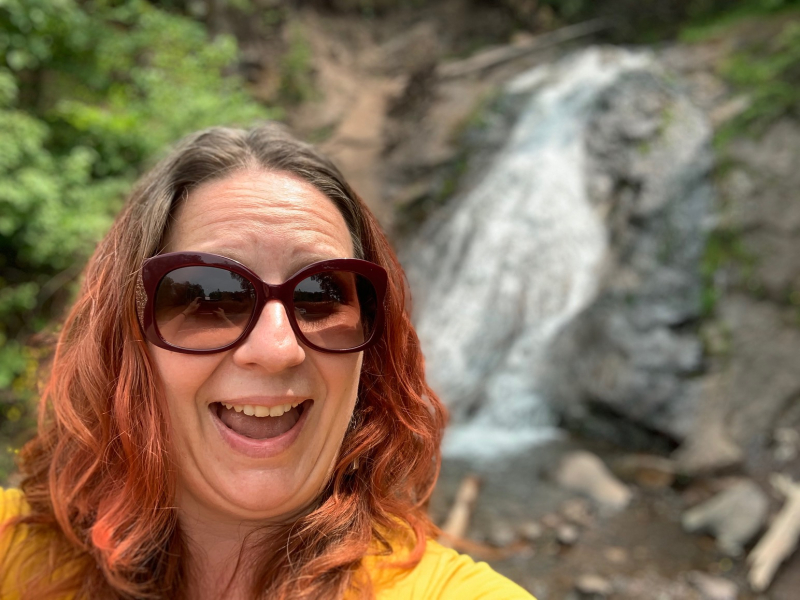 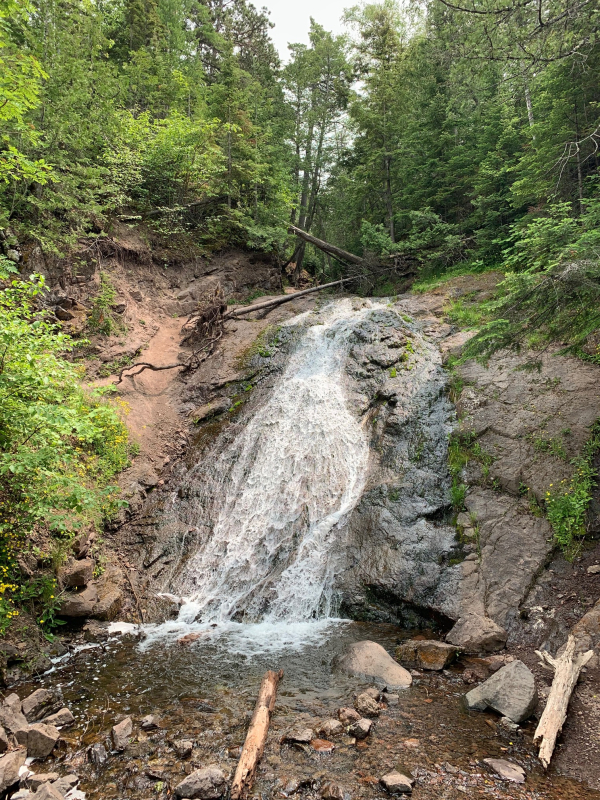 In order to get this shot we had to wait for about 10 minutes for a young man to stop standing on a log smack dab in the center of the falls. He was completely oblivious to us standing there patiently waiting our turn to photograph it. I thought about clearing my throat but the sound of the water would have drowned it out and we were in no hurry.

Just down the road from these falls is a bakery run by monks. We stopped but it was Sunday, and of course they were closed and at Vespers praying to ensure their dough keeps rising. Apparently the loaves of bread run around $40 each - which seems quite steep for the local economy, so it must be good bread. I'll have to wait until my next visit to find out. 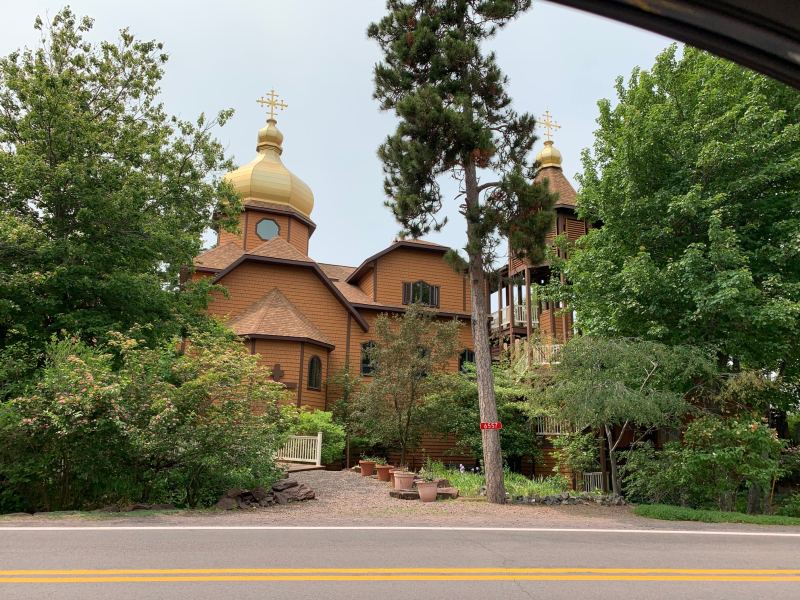 Here is the monks' house down the street from the bakery.

Next stop up the road is Eagle Harbor - home of a harbor and a lighthouse, among other things. The only thing remaining of the original settlement that existed since Copper Harbor times is the general store here. The lighthouse is a fun stop, and worth chatting with the docent managing the museum and directing you on how to take the best possible photo. 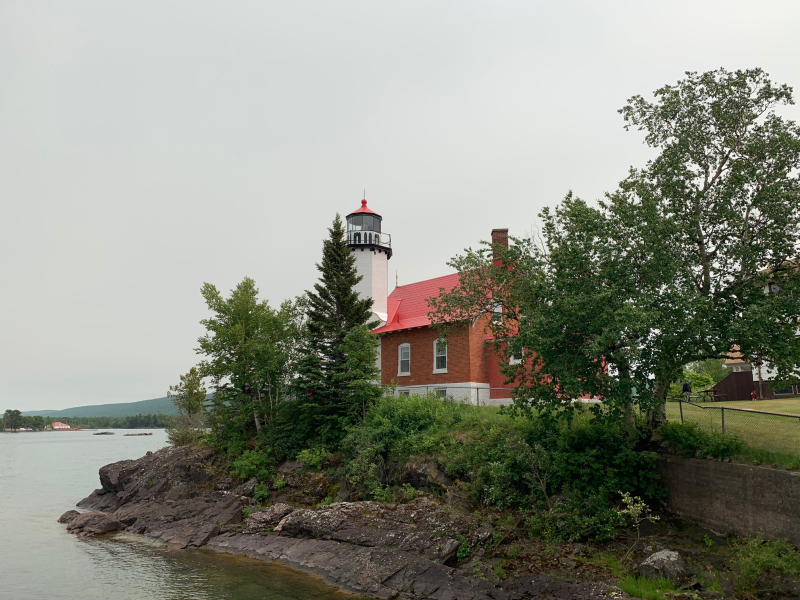 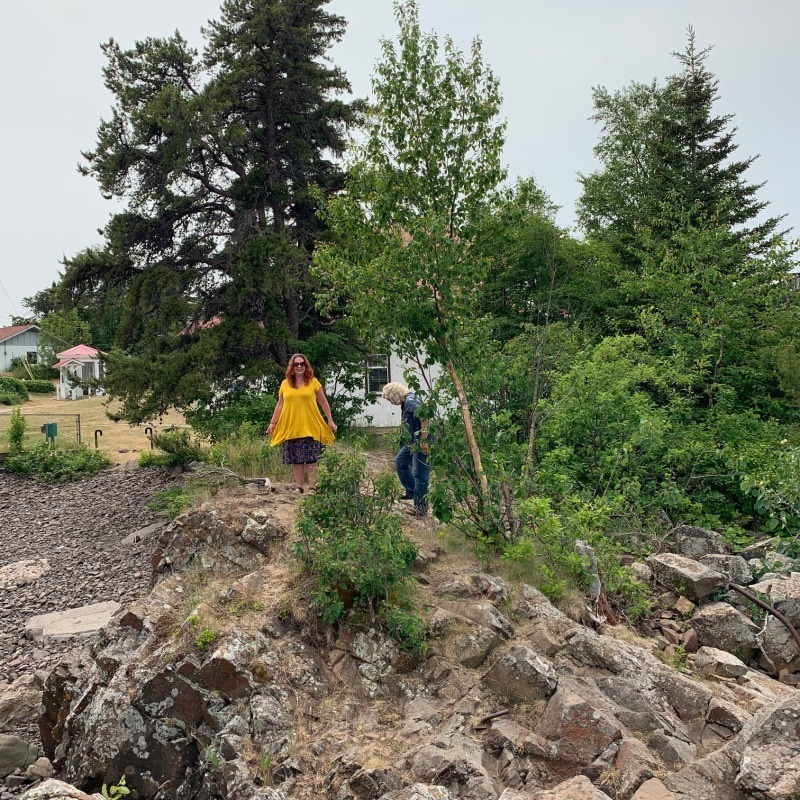 And here I am, stumbling around attempting to get said photo. I'm far from billy goat status when it comes to climbing over rocks near treacherous water. 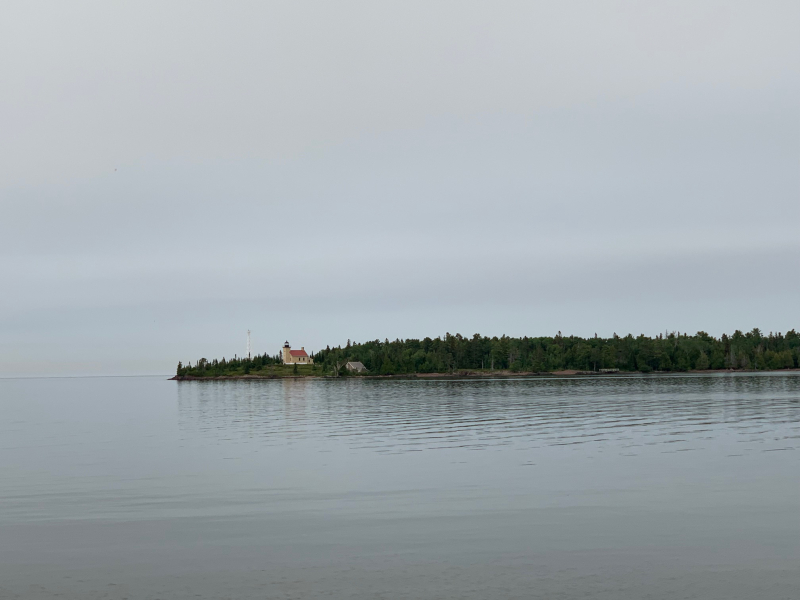 And at last, after a rock picking stop at agate beach, we made it to Copper Harbor, the Northern most tip of the Keweenaw (sort of - you can go further North, but not in a car). This is a shot of the lighthouse, and other side of the water/harbor is Astor Point, named after the shipwreck of the John Jacob Astor.  A ship named after the famous and successful fur trader and founder of the American Fur Company, John Jacob Astor who Astoria, Oregon is named after. I was quite tickled to read about the naming of said ship as it brought some of my United States travels full circle.  If you are interested, read about my Astoria adventure this past fall of 2018, we spent a good chunk of time in the historical society there.

The only thing exciting about Copper Harbor, besides its history, is the that it is the end of U.S. Highway 41. The other end is in Miami, Florida. Meanwhile, Copper Harbor is overtaken by tourists on bikes and funny looking helmets and high priced boutique grocery stores for vacationers. We turned around and headed back for Houghton as we were losing light and dinner time was approaching - and there was one last stop I needed to see. 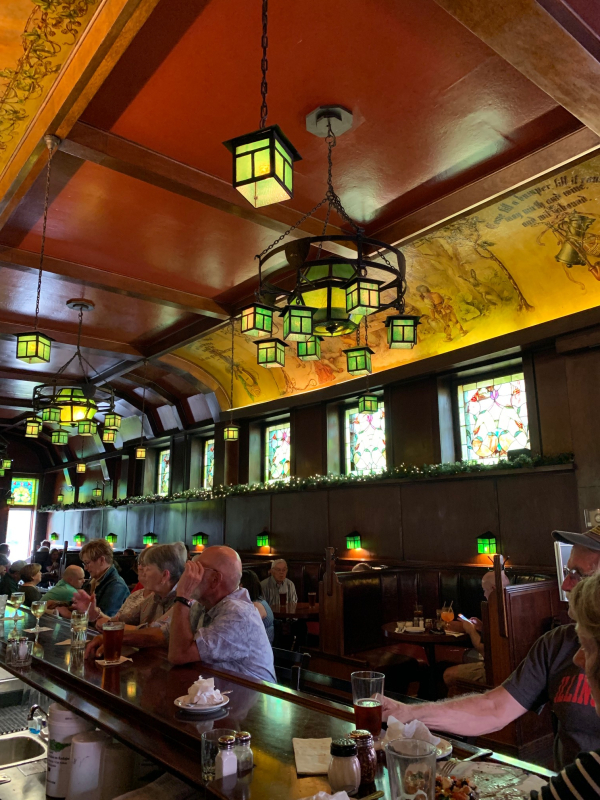 The Ambassador - a former men's club turned family pizza place with very strange Brother's Grimm murals on the walls and ceiling that apparently came in canvas rolls from Germany.

It is a very popular establishment in Houghton on a Sunday night. 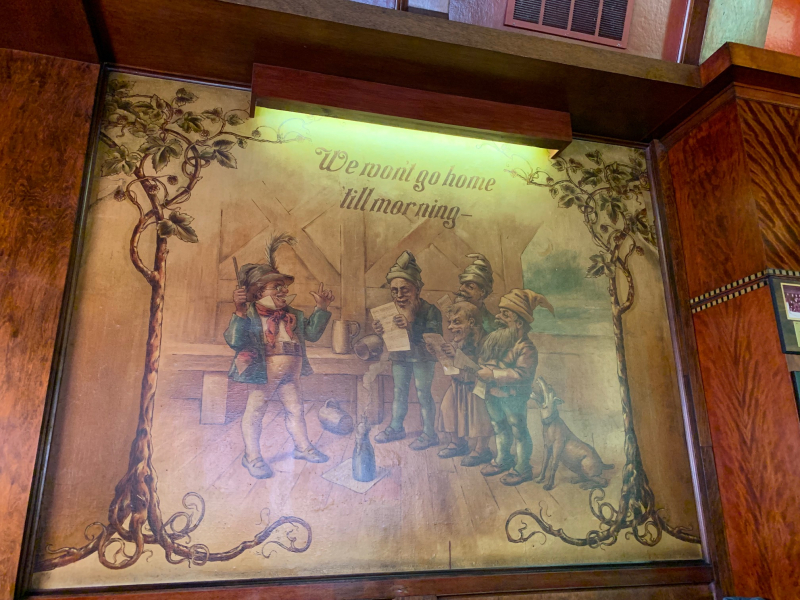 They have Michigan/Detroit style thin crust pizza with some interesting options - like Taco Pizza, and other horrific options that offend all pizza sensibility. We ordered the gluten free Greek and a Vegetable Pizza (so I could get my salad with my cheese). 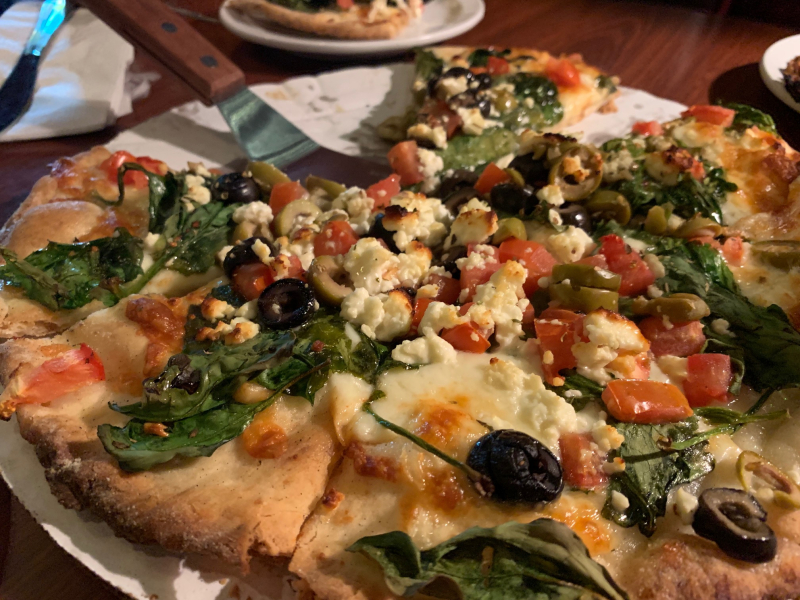 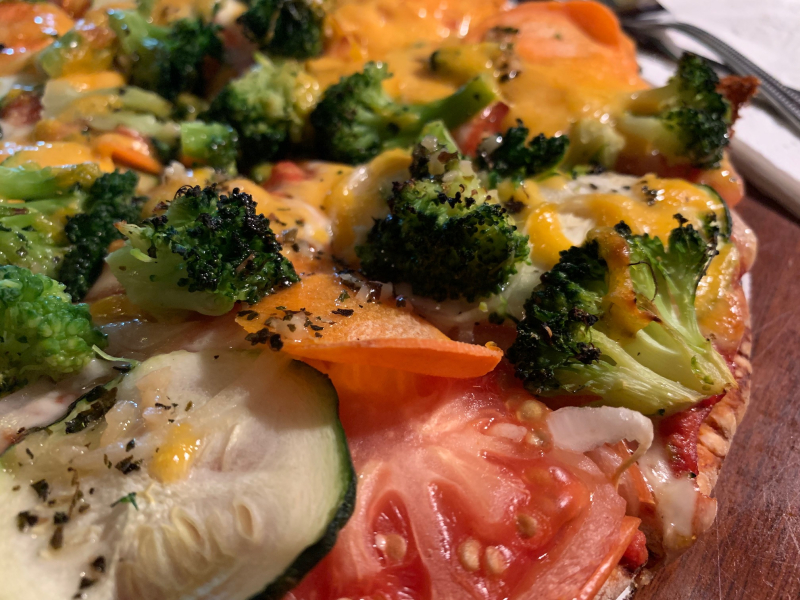 It was super tasty pizza to end an interesting day of exploration. 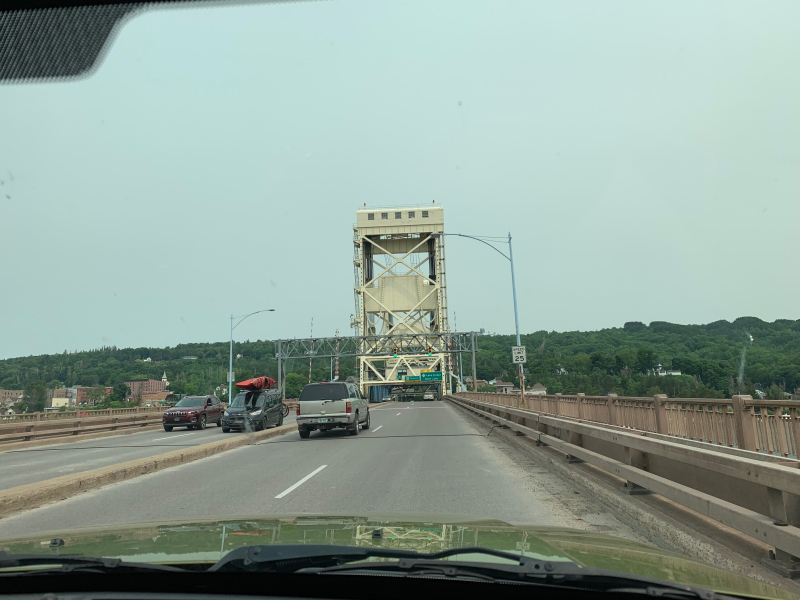