It was the last full day of our grand Midwestern adventure visiting relatives and seeing the special cultural hubs of the lands of cheese and big water. Looking back at the last nine days it had been quite the diverse variety of things from Trampled by Turtles on the Duluth Waterfront to the Shrine of the Snowshoe Priest in Baraga, Michigan. 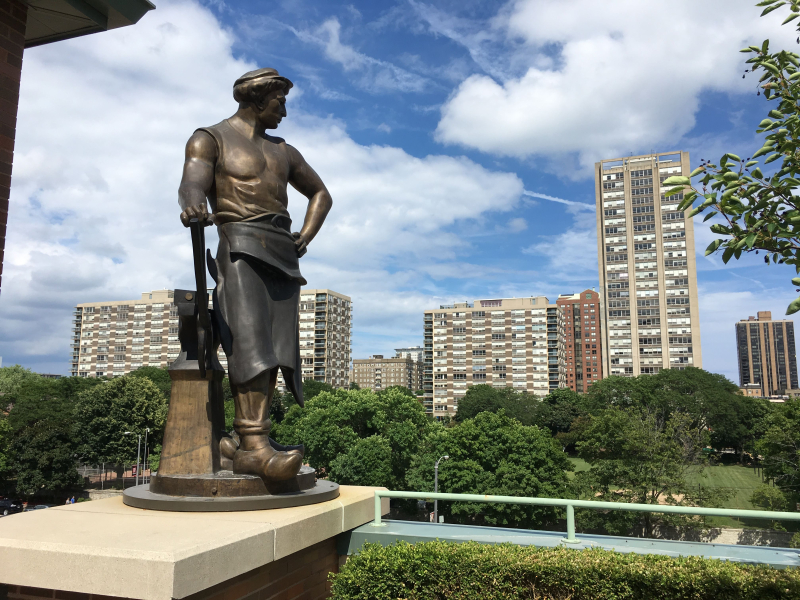 An adventure to a lighthouse in a nature preserve on Lake Superior, a House on a Rock built to house collections of the weird, a walk to a lighthouse next to an industrial wasteland and a small bronze statue to a sitcom character in Milwaukee. There was a giant bloody mary, a limburger cheese sandwich, farm to table dining, a giant pretzel  and so much cheese, so many cheese curds I had lost count.  My feet were swelling from the heat, from the inflammatory items in my digestive track, and from all the time driving in the car. The vacation was taking its toll. 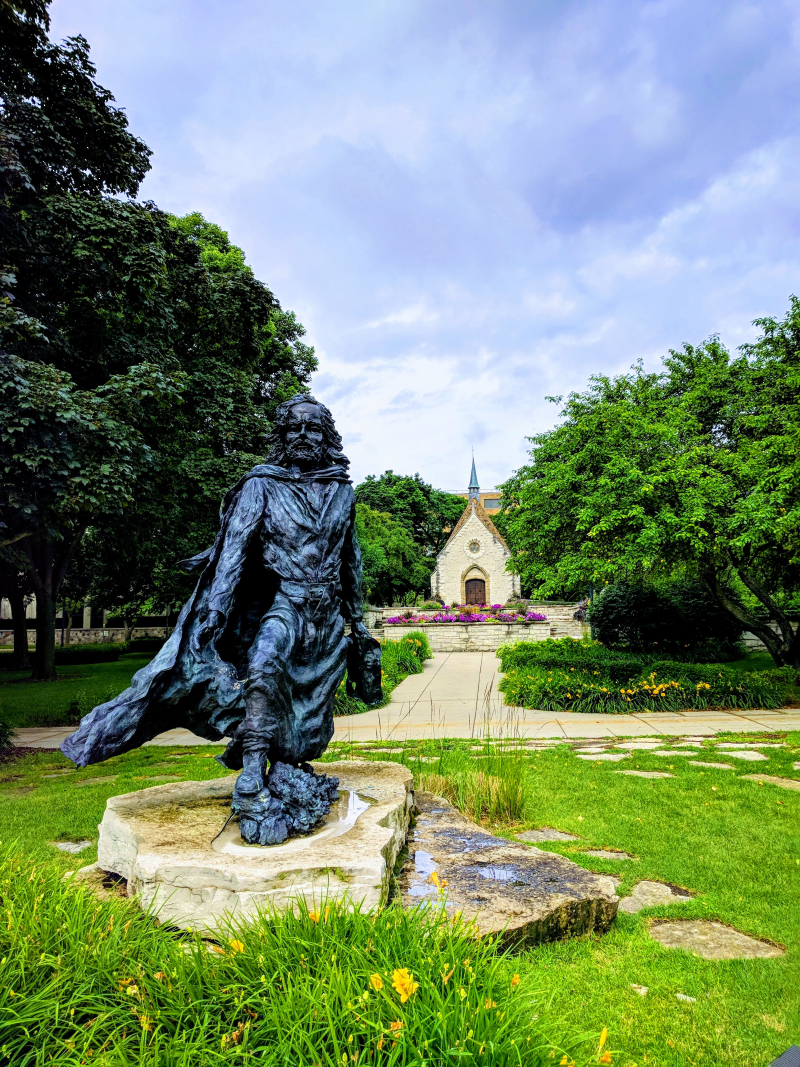 We got up early Saturday morning to meet Dan's cousins who joined us for a day of museums and fun in Milwaukee. I had put out a call to the little brother and soon to be sister-in-law in Chicago - but thunderstorms threatened and the two hour plus drive was not going to happen for them - so the last bit of family was not to be squeezed in on my side.

We thought, oh we'll just get bagels and check out the Joan of Arc chapel then do the mansion and museums. It will all work out just perfect.  Well - that would be when Marquette University is in session. We saw the outside of the chapel, but there were no bagels, I don't even believe the bagel shop actually exists (thank you google). So we ended up at the local greasy spoon with the union wait staff who were very put out to get us coffee and food with our cheese. 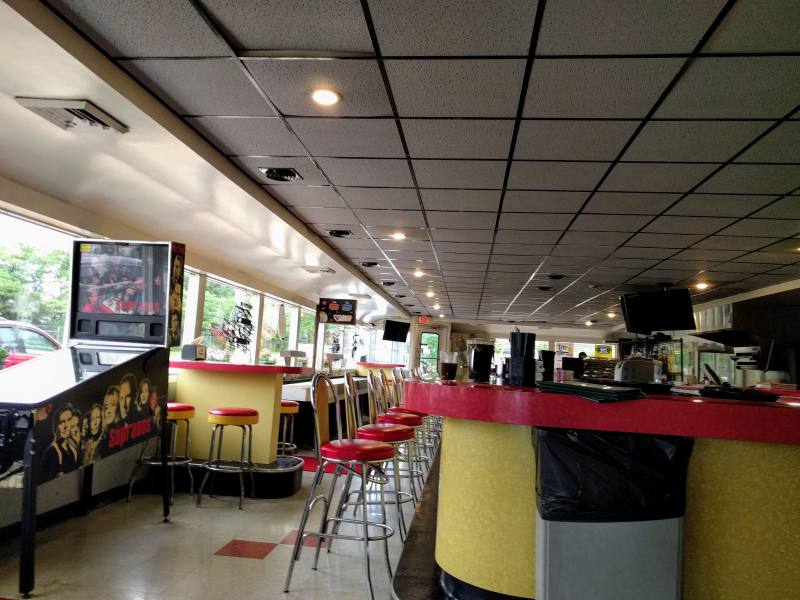 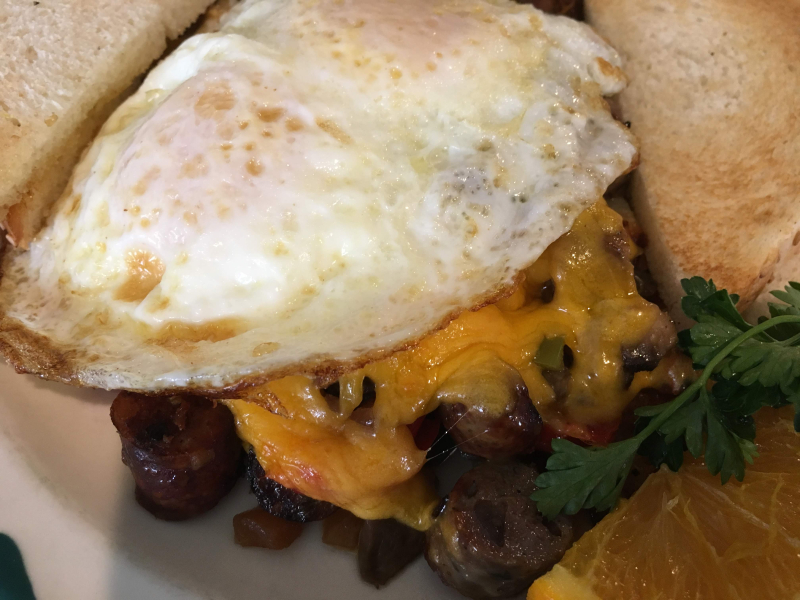 It was so heavy, but it came with an orange and sprig of parsley as garnish so it was all ok. This is my food above - I ordered the vegetable hash.  I couldn't find the vegetables among the cheese, the sausage or the egg. God bless the Midwest we had to walk this off. So we went to the Pabst Mansion to learn about the hero of Pabst Blue Ribbon beer, Captain Pabst. 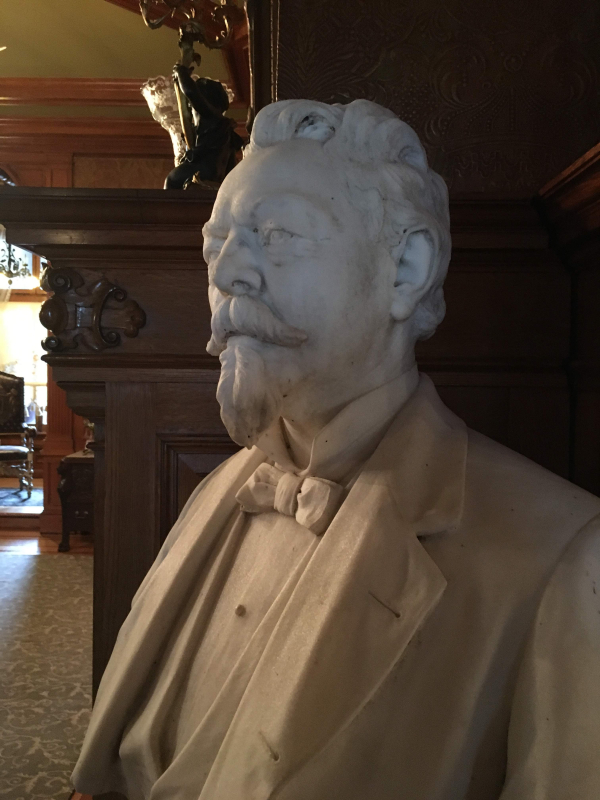 We learned on the tour of the mansion that this statue was made from Captain Pabst's death mask. Kinda creepy. 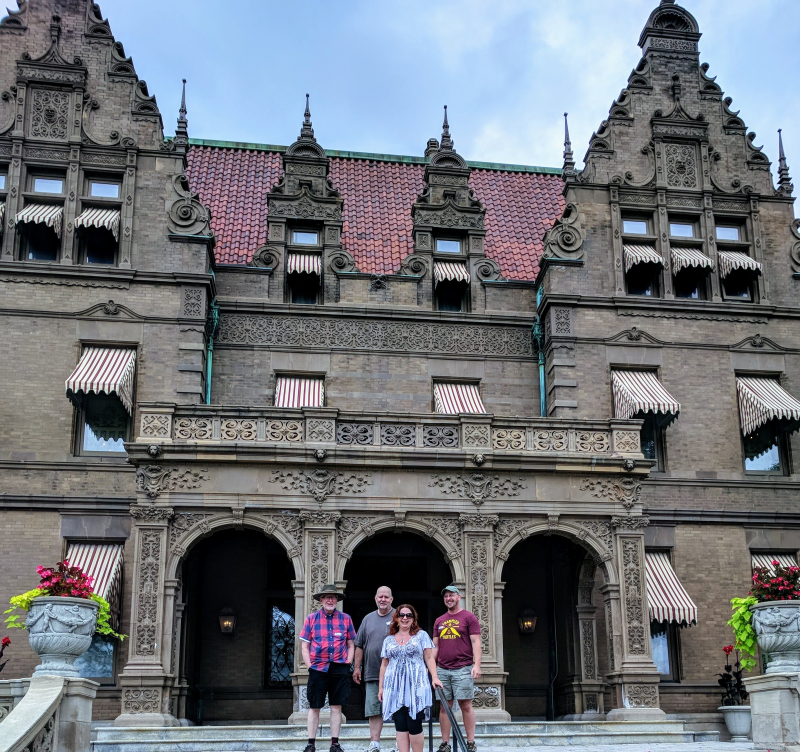 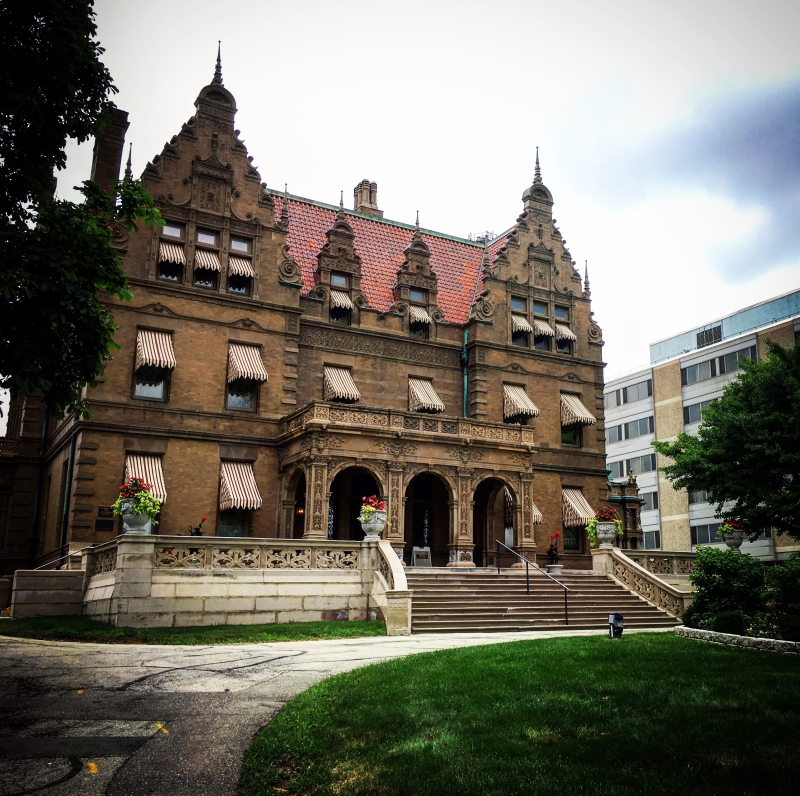 The Pabst Mansion is the last remaining mansion on old Grand Avenue, the rest torn down in the name of progress and Holiday Inn's in the 1960's. The Pabst Mansion was actually saved thanks to a group of concerned citizens who all put in for individual mortgages in order to get the minimum to preserve the mansion. So important was the craftsmenship of one beer baron's home and the desire to keep it from being turned into a parking lot. 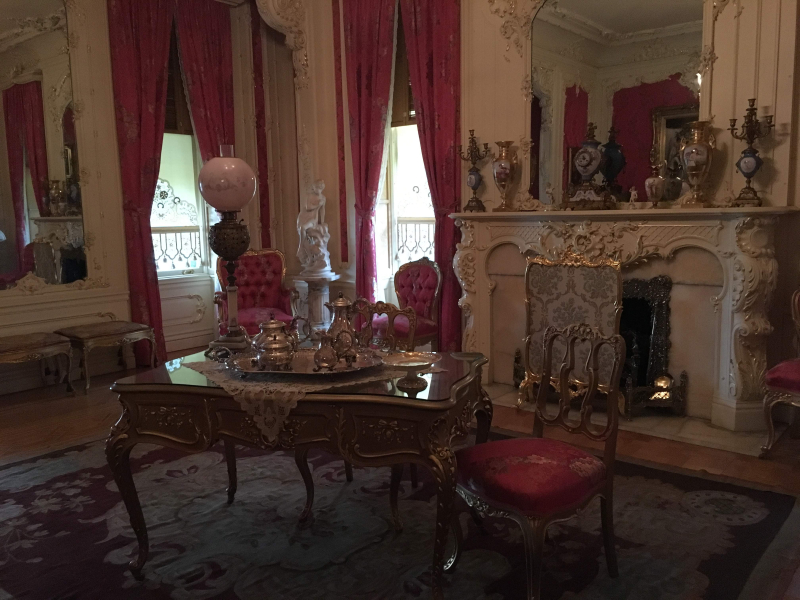 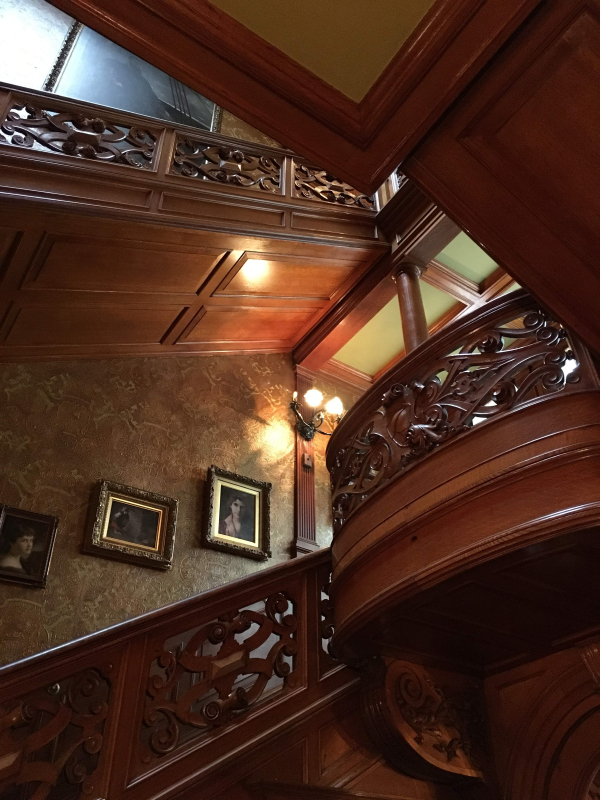 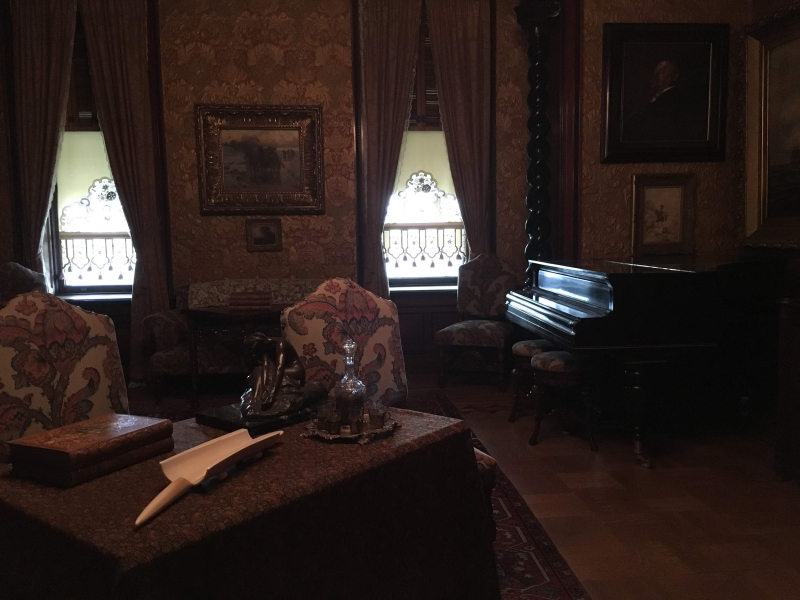 It is quite the display of craftmanship and opulence of the time. The Pabsts' spent quite a bit of money to hire a number of craftmen to build the home and include so many flourishes. Despite its detail it only took 3 years to build, which means they had a lot of people working on it, and a lot of money to spend.  Our dedicated volunteer tour guide knew tons about the history of the work and the family, and had been giving tours for over 9 years at the mansion. She was especially fond of the letter below written by Captain Pabst as the equivalent of a cover letter to his will - and displayed in his study for us to review the reproduction in his own hand. 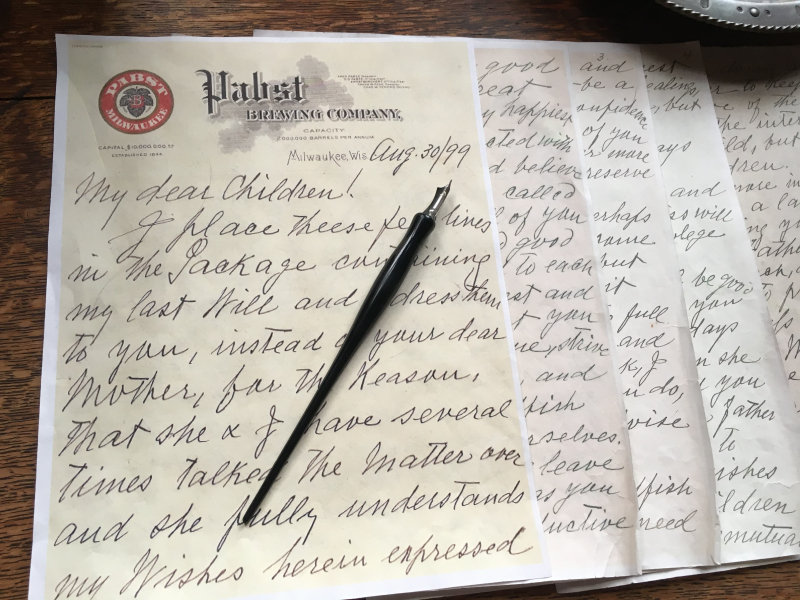 Interesting cultural fact about the history of Milwaukee. At one time 80% of the people there spoke German as their primary language. In the Pabst home, German was spoken, English was purely the language of commerce. It is the German heritage that made Milwaukee a hub of breweries and one of the last hold outs before prohibition (both from industry and cultural perspectives).  Also interesting fact, the Archdiocese used the Pabst Mansion for a good 30 years after the Pabsts lived there, which is how it made it to the 1960's before facing potential demolition. The good Catholics however, painted everything white resulting in quite a bit of restoration needing to be done to get it back to original "like" condition. 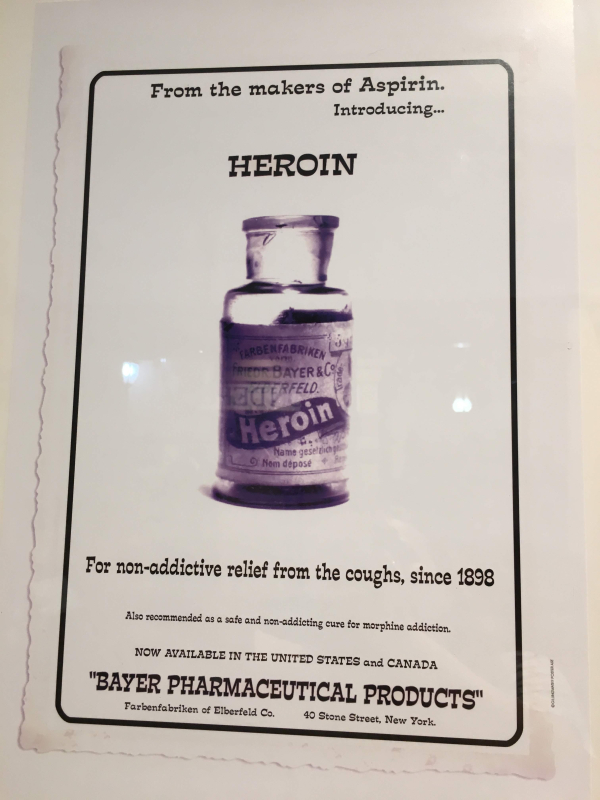 Speaking of bad choices made in days gone by, the next place we went after the mansion was a placed called The Museum of Yester Year. This museum features the personal artifacts of yet another odd Wisconite who liked to collect things. This guy however, had a real eye for the mundane, so the collection is of all the things you might have found in stores and such in early 20th Century America. Like posters for Herion, as found above - brought to you by Bayer Pharmaceuticals. 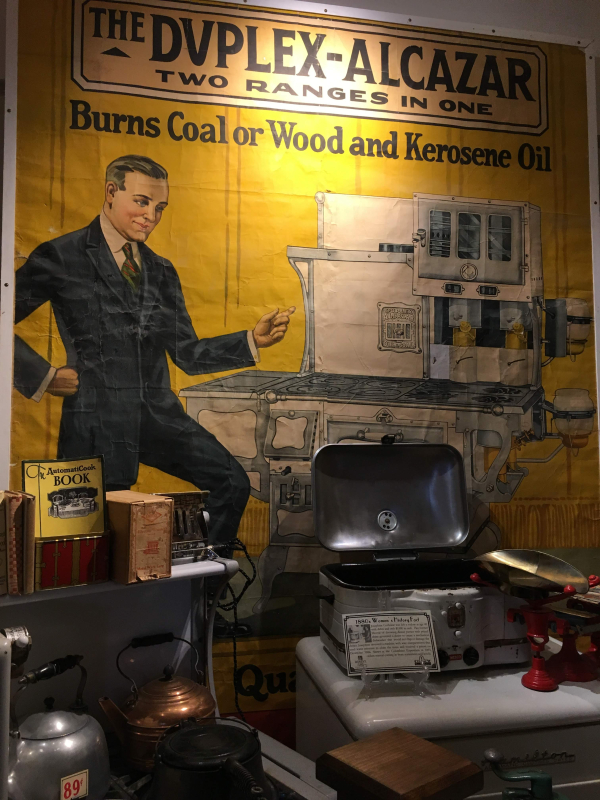 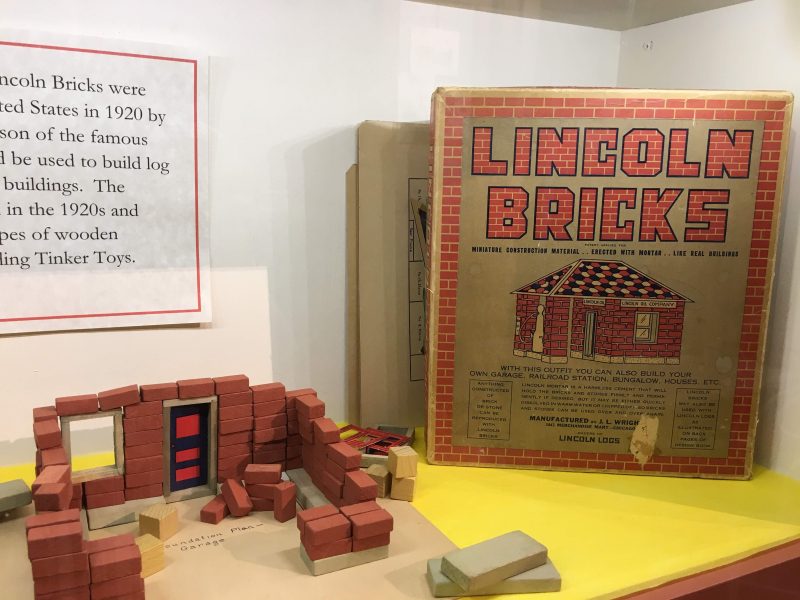 Groceries, toys, drugs, and propaganda were all on display in thematic collections to peruse at your leisure. Unfortunately, while we were there, a large group of extremely unruly children with a set of less than strict chaperones entered the museum. Poop and fart jokes were being screamed at high volume along with choirs of slamming doors and hallway running sessions. It was not really a place for under supervised kids to be running rampant so we made our way toward the door and down the street to engage in a little afternoon adult entertainment. i.e. sitting in an air conditioned bar, drinking a cool brew, and eating a giant pretzel. 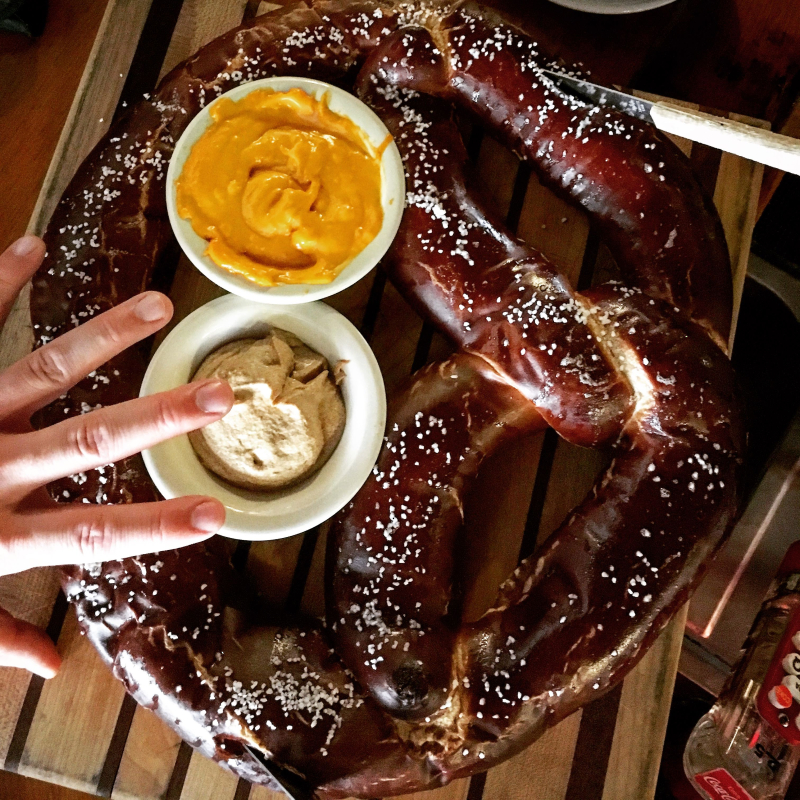 The giant pretzel at Mader's is actually quite huge.  I was expecting something a third of the size, but when it arrived my Instagram happy fingers could not hide my glee. I have no business eating such a thing - but it was good especially smothered in cheese sauce and washed down with a German style brew. Living the Milwaukee life. 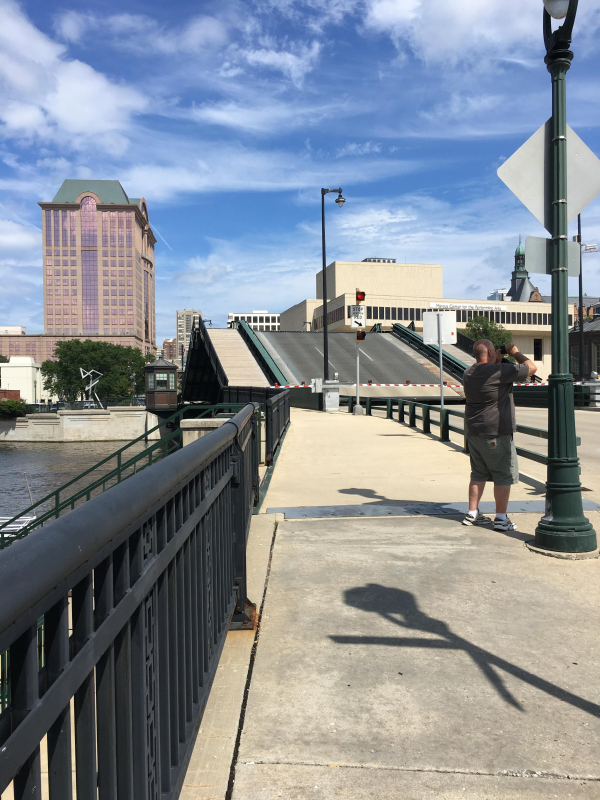 After consuming the giant pretzel we realized that we had 1.5 hours before the two museums closed. There really never is enough time to fit it all in. I really wanted to go to the main Milwaukee Art Museum, but I couldn't remember if it was really the modern art museum and so when push came to shove I was like whatever is closer. Thus, we ended up at the Gayest Art Museum Ever the MSOE Grohmann Museum. A museum dedicated to depicting science, industry, and workers in statue, painting and other forms. The statuary was straight out of a Depeche Mode album. 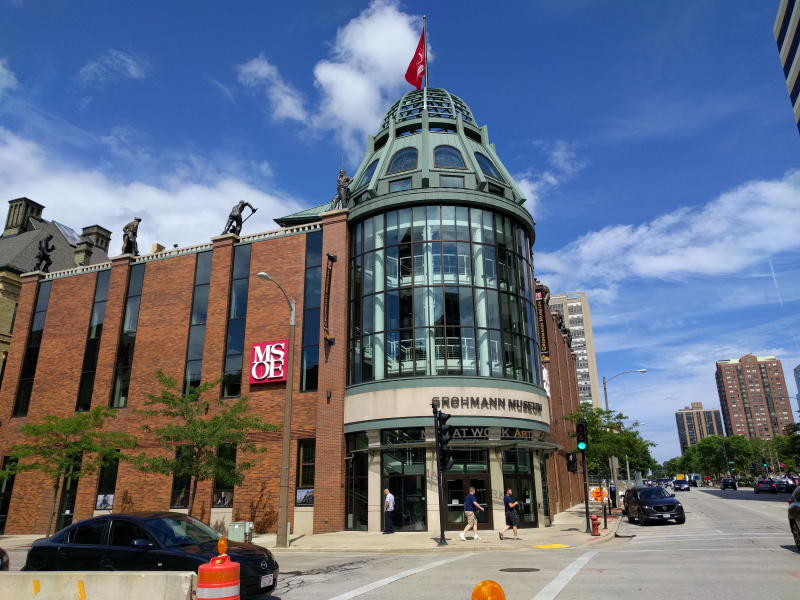 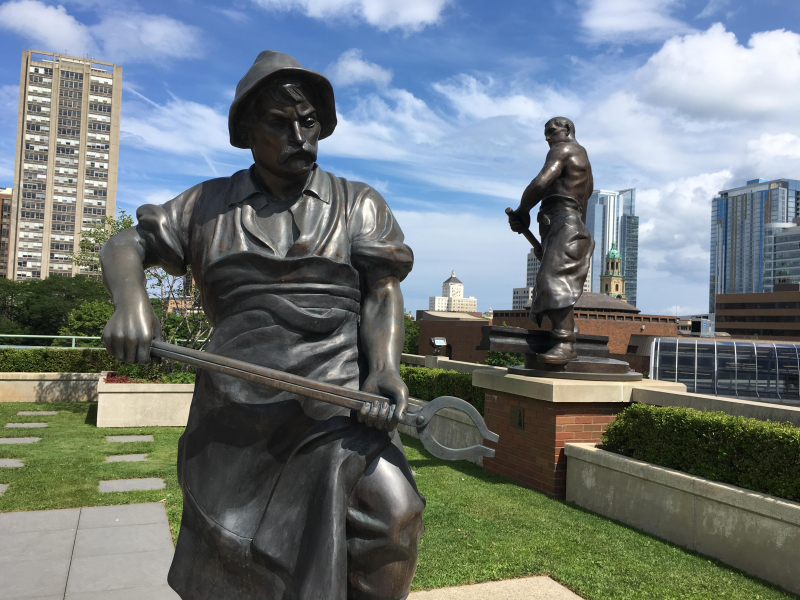 Then there were the baby ducks. Which the museum was VERY aware of them having taken residency on the roof garden/statue level of the building. They were so cute though, so everyone was very concerned. 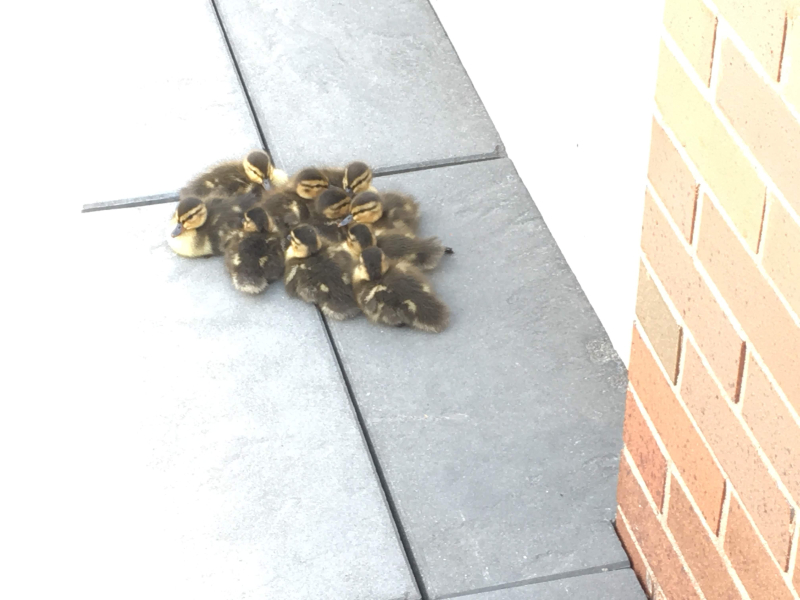 There was also the painting of the Tower of Babel, which is one of my favorites. 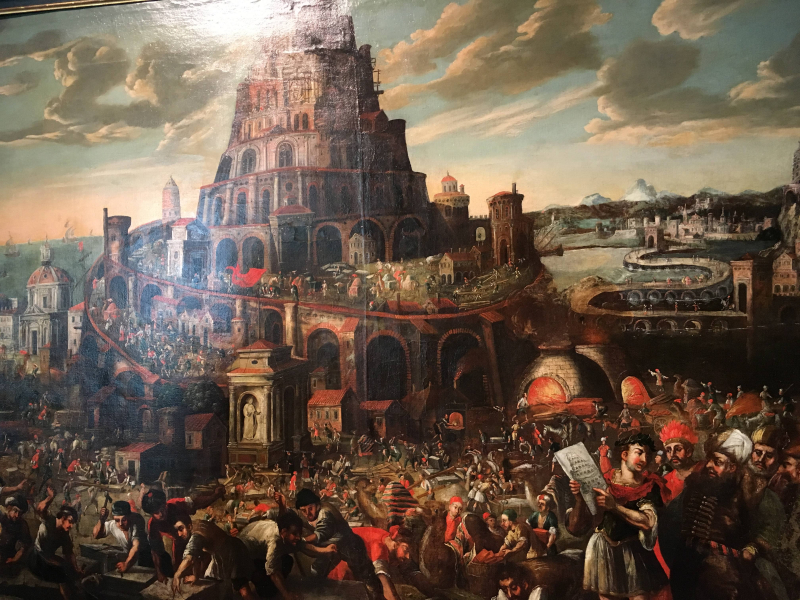 The rest of the art all featured industry from pulling teeth to steel manufacturing. It stuck to the theme very successfully. Then it was time for dinner. We had reservations at the 5 o'clock Steakhouse.  "The best steak I've ever had!" said two Lyft drivers in one day about the place. Local reviews were glowing about the food, but not the neighborhood. The neighborhood was not as rough as it could have been, and we probably walked by the Dahmer residence on the way, but small price to pay for a good steak. 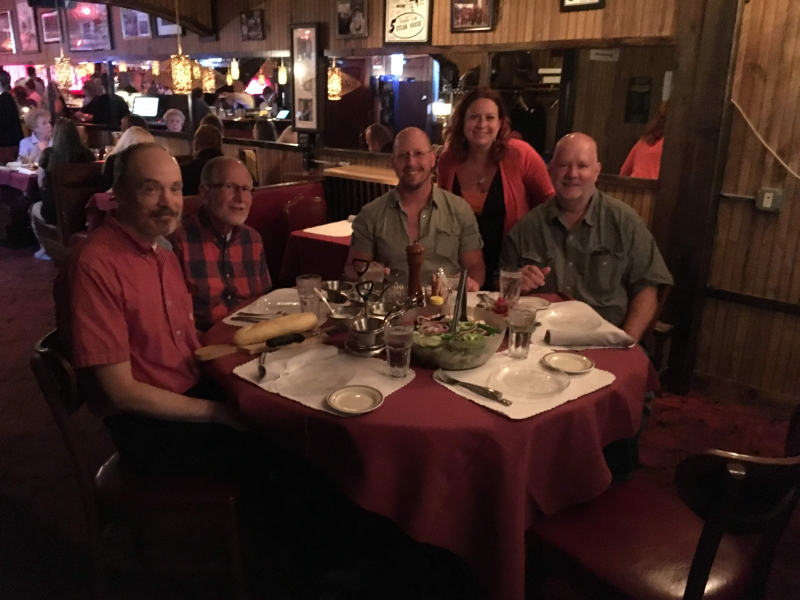 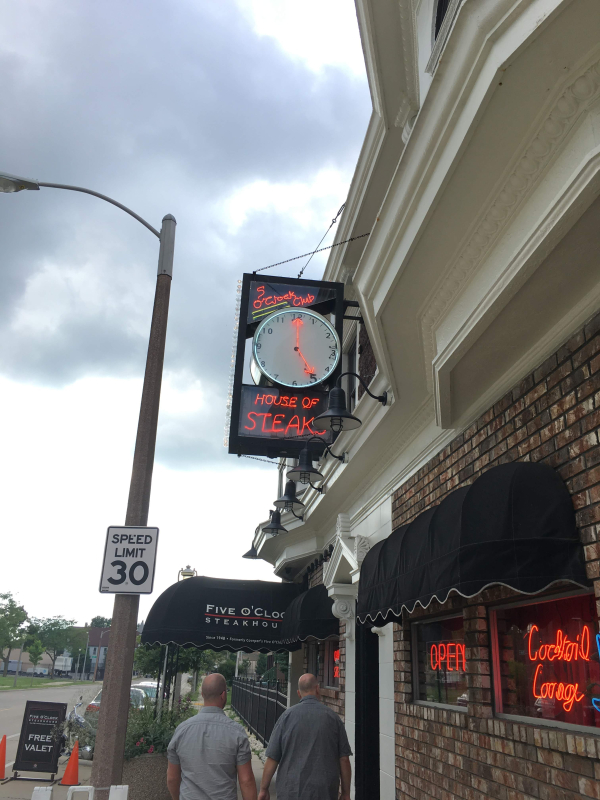 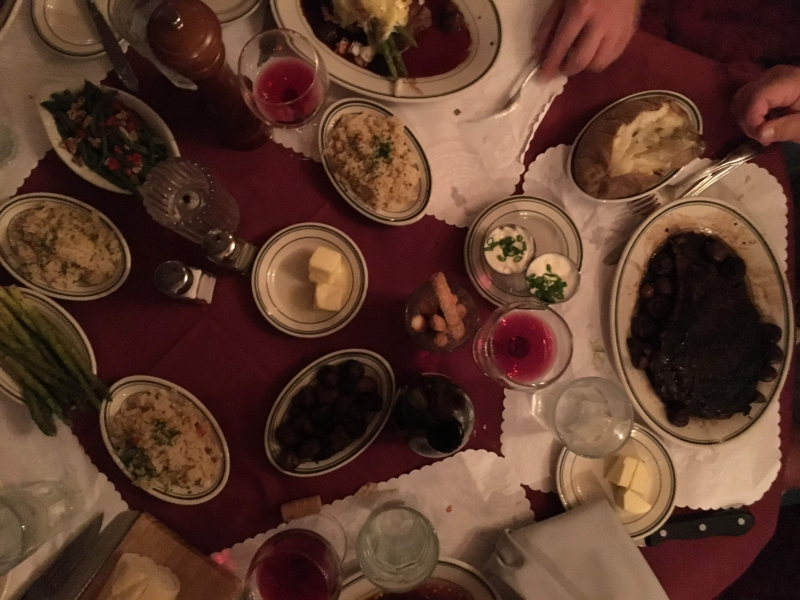 The club was wood paneled and old school. It just felt like a place for a good cocktail and a hearty steak. They held back on no things and filled our small table with all the things. We ordered too many things on top of that. But at the end of the day - the steak I had was phenomenal and the meal was super good. It was a perfect note to end a lovely vacation and visit to family and friends.