Rainbows at Niagara Falls and Tasting through Niagara Wine Country

For my third full day in Toronto (of my 3 days off from classes) I was on a tourist mission to complete a very large scope of exploration. My mission - learn about the Niagara wine region, take a boat into the mist of Niagara Falls, and eat something yummy. I completed my mission. 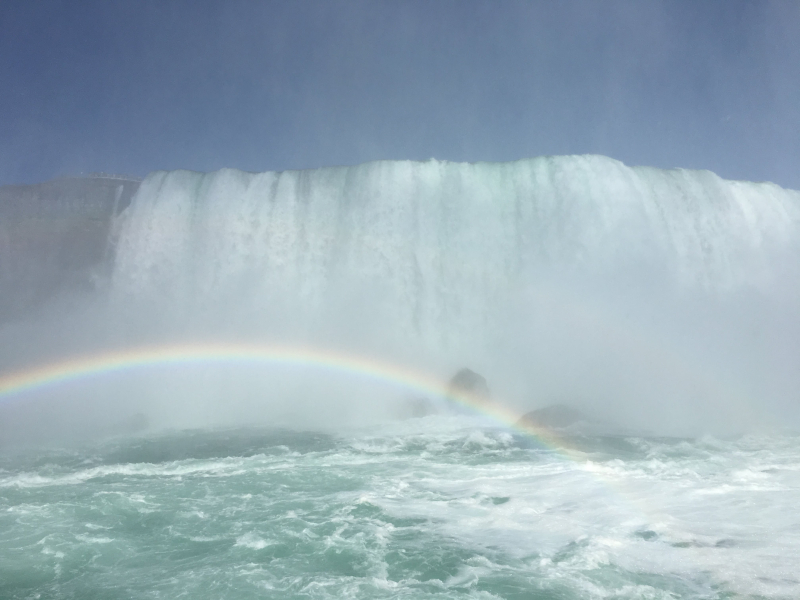 Thanks to the help of the individuals at Richmond Station, I had a wine tasting itinerary and a reservation at the Restaurant at Pearl Morrissette. I also had a ticket for a boat ride up to the falls from the correct side of the border (Canada side, the better side). 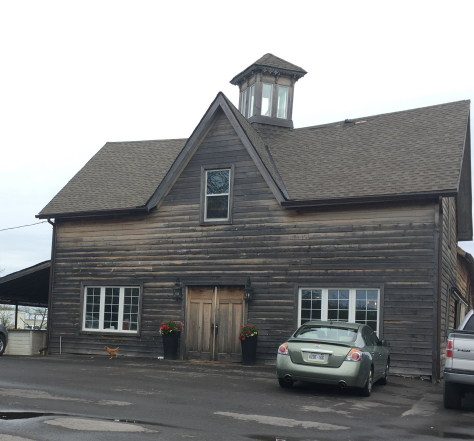 I arrived at my first stop, Leaning Post Winery, around 10 am to find a live chicken perfectly placed in front of their wooden doors. I stopped my car to take a picture - of course the chicken immediately ran out of the way from the picturesque location. Above is the picture of the running chicken. 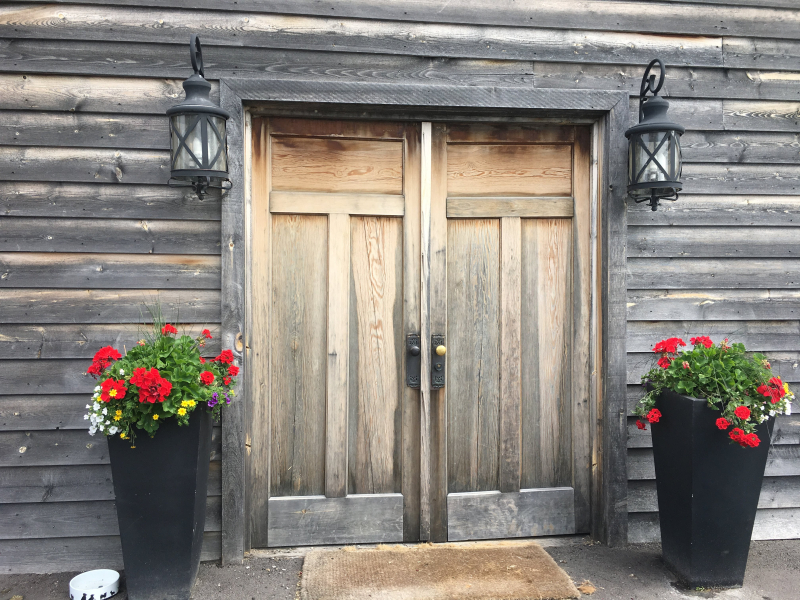 Now imagine a chicken standing right below one of the doorknobs. How perfect of a shot would that have been? Exactly. Meanwhile, the folks inside the Leaning Post Winery were phenomenal - and their selection of wine beyond creative. They were also very helpful getting me acquainted with the rules and regulations of wine in Ontario - to which there appear to be a lot of rules and regulations. Like you have to have at least 5 acres of grape vines planted in order to have retail space to sell your wine (i.e. a tasting room), just for an example. We didn't even touch on the VQA - more to come about that later. 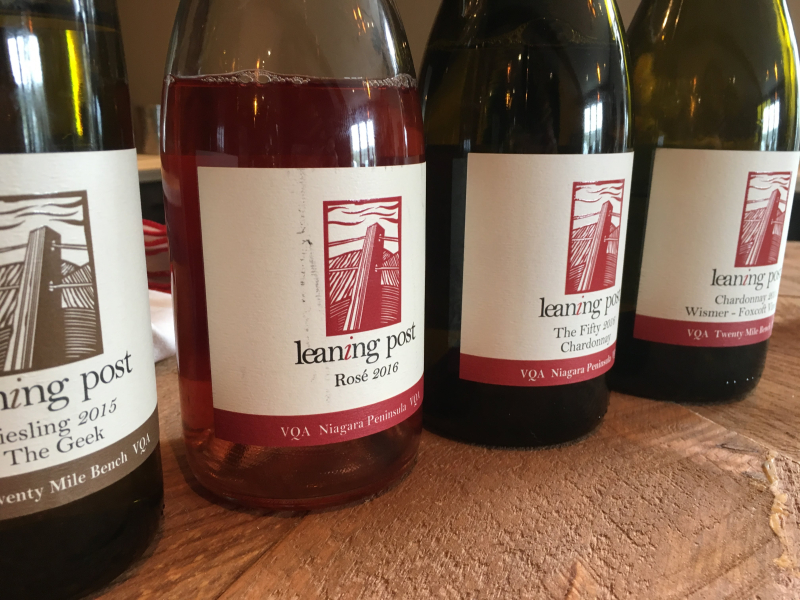 I spent almost 2 hours chatting, tasting & spitting the wines of Leaning Post - the ladies working there were wonderful conversationalists and extremely versed in the wines of the region and the processes of the winery. What was most important however, is that they were accessible - they truly had a love of the art of wine making and sharing it with the visitor. I was also the only person who came in willing to taste everything they make. I was like I'm an open book and you are the story - please tell me what this land and these grapes have to offer. The wines were extremely varied to levels I have never experienced in wine tasting before - and they were quite proud of their unique wine making experiments. I'm not sure a formalist would agree with me - but I've never been a conformist, nor is my palate. It was really creative stuff. 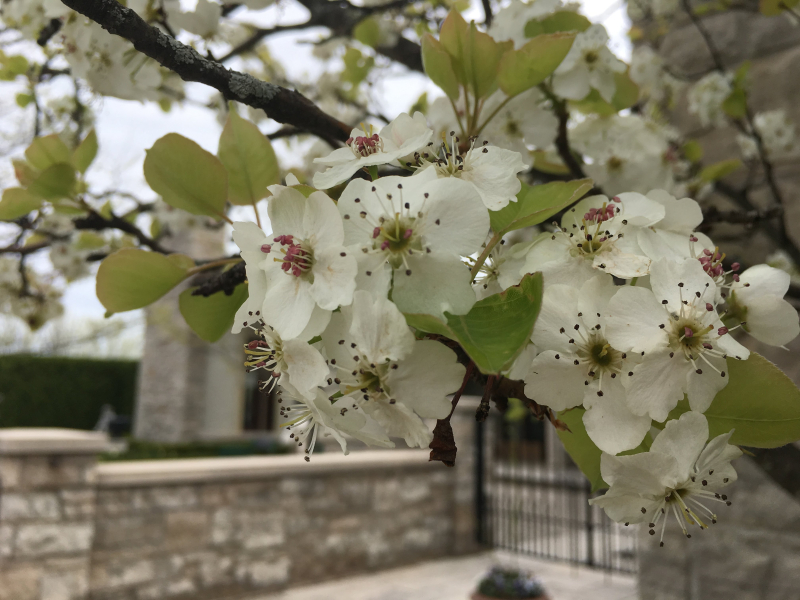 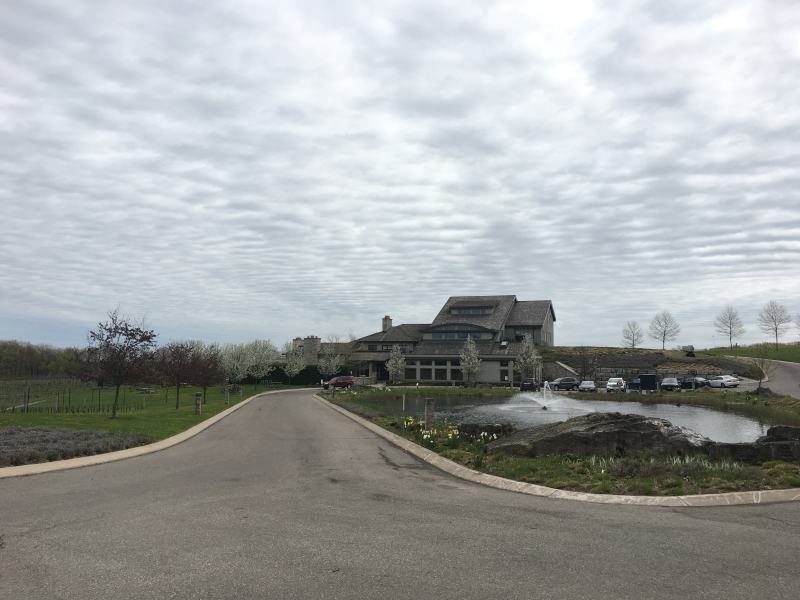 Next up and on the way to my primary appointment for the day was Tawse. For every bit that Leaning Post was approachable Tawse was a corporate selling machine. The most awarded of the Niagara region Chardonnays - Tawse behaves as a powerhouse winery tasting room should - like a well-oiled selling entity meant to push you out the door with expensive bottles in your hand.  Somehow, despite my strong intention to do otherwise, in the brief time I was there I ended up purchasing two bottles of red wine - both wines I plan to not drink in this decade. They were not that expensive (based on Washington Wine standards, let alone California) but they were still not the least expensive fermented grapes on the list - nor any of the award winning Chardonnays. They were just good, and interesting, and never repeatable. My next stop was Pearl Morrissette, a reservation only tasting room - where I had, thanks to the fellows at the restaurant on Friday, reservations and apparently some industry cred. Not that I need industry cred, because I'm Angel, and whereever I go I meet people and make friends. This experience was no different - however, the fellows at Pearl Morrissette are a special kind of breed of winemaker, and thus I encountered the hipster vibe (friendly hipster, but still hipster). Those of us tasting were just curious as to what this interesting "low intervention" winery had to offer the wine world with its commitment to "traditional" wine making methods, including aging wine in large amphora from the country of Georgia, and avoiding steel containers at all costs. 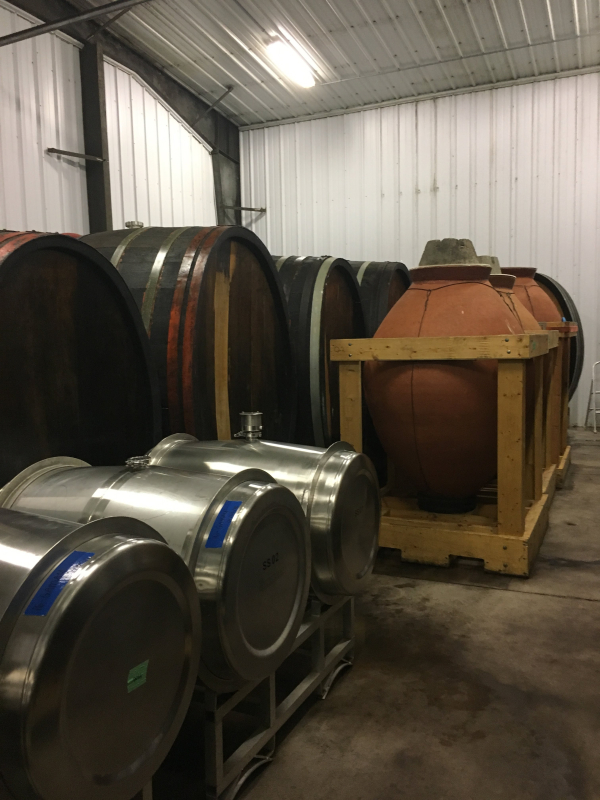 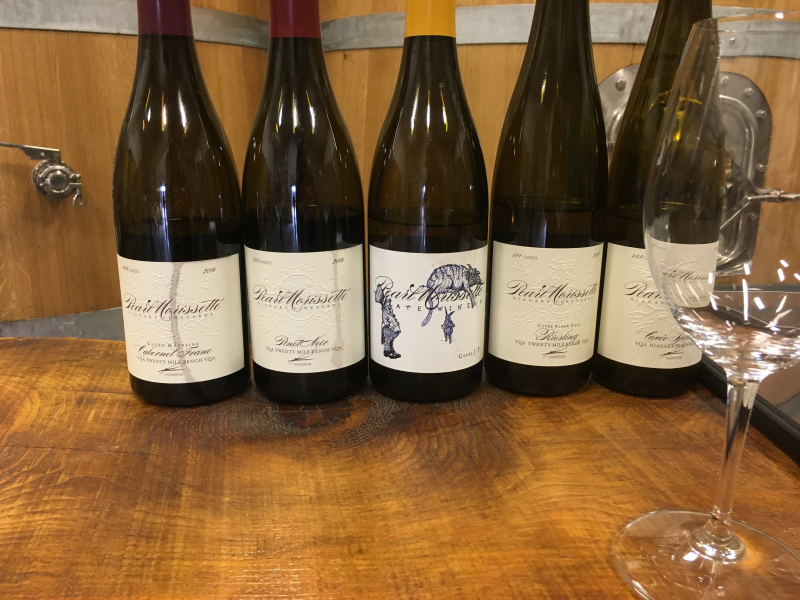 I'm using quotation marks around things not to be funny or judge or even downgrade - but to emphasize the difficulty of vocabulary to even describe a certain way of approaching an art when there are previous models, but you have no interest in following them.  The moment I walked into the wine room at Pearl Morrissette one of the primary wine makers was leading and tour and was asked about "orange" wines. He replied in a very laid back Canadian (but not too Canadian accent) that they "were no longer interested in orange wine" because it was "a bit of a label, or perhaps even a fad, that didn't really describe anything of substance."  In short they are trying to really do something that mimics no one here to find what "the grapes of Niagara really want to do and be."  "Anyone can mimic a style like Burgundy. But is hard to figure out a new style that the grapes of a new region want to be." 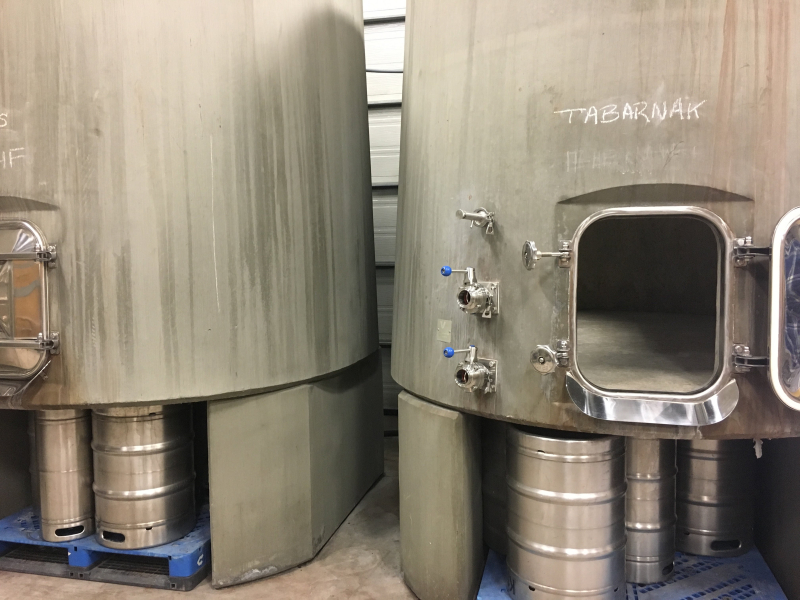 Apparently this involves neutral oak and concrete aging casks and traditional, low intervention methods with a lot of chemistry to prevent vinegar from occurring. The results are some of the most interesting wines I've ever tasted, anywhere in the world - Leaning Post had some unique wines, but what these guys are doing is a whole other level (except they would say it isn't, they are just doing what the grapes want). They were super helpful however, in supplying me with a box that will safely allow the wine back with me via air travel back to Seattle. I want to bring it back to some industry folks out there and see what they say - just for the thought experiment. 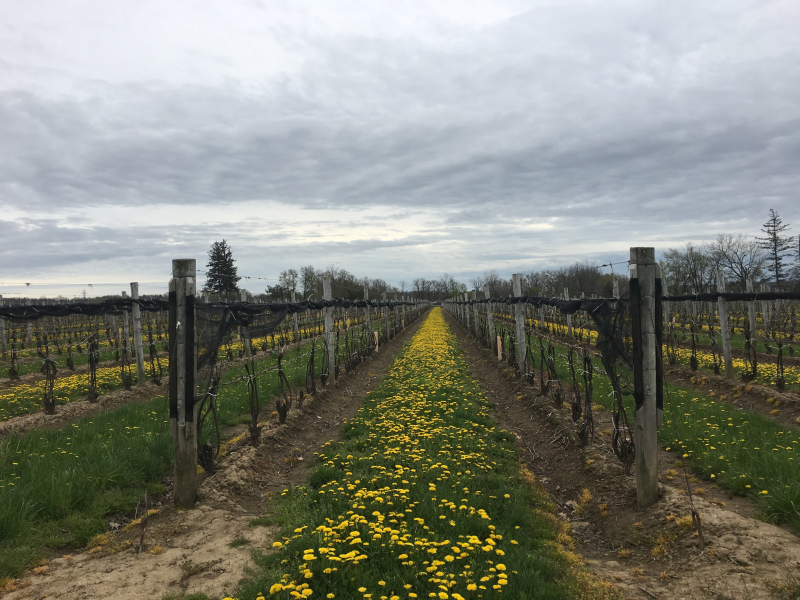 I'd like to take a moment, before I go on to my next adventure to talk about dandelions. Not my new dragon Dandelion, or Dandelion Jam, or Dandelion garnishes, or anything like that but just the prevalence of Dandelions in general I found in Niagara and there location to the grape vines. You know you are in a different kind of wine country when there are Dandelions growing in-between the rows of tiny little vines. Tiny little vines who have cousins that died because of bad winters, whose leaves haven't event sprouted yet when in Washington wine country they are already lush and flowering. 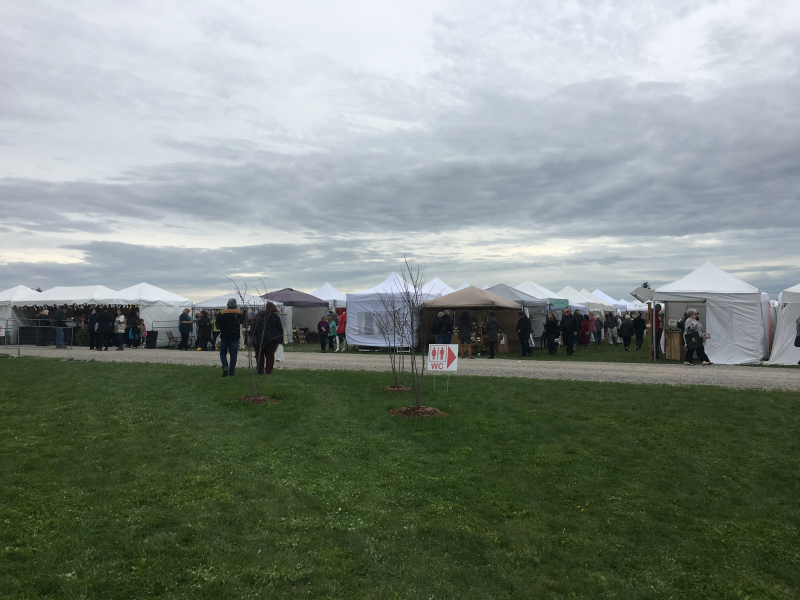 The vines above are part of 13th Street winery - where I was sent to go to the bakery to try the Butter Tarts. Not just any butter tart but The Best Butter Tart in Ontario. (I took no pictures of the butter tarts but I did eventually get some and they were good but I have no baseline to judge butter tarts - they were definitely buttery). Besides butter tarts I found a giant craft fair and a host of food trucks. It was lunch time, and I love hand made stuff and things so I paid the $5 Canadian entry fee and wandered in to check it out. When in Niagara on a Saturday afternoon what else is there to do but check out some local vendors? 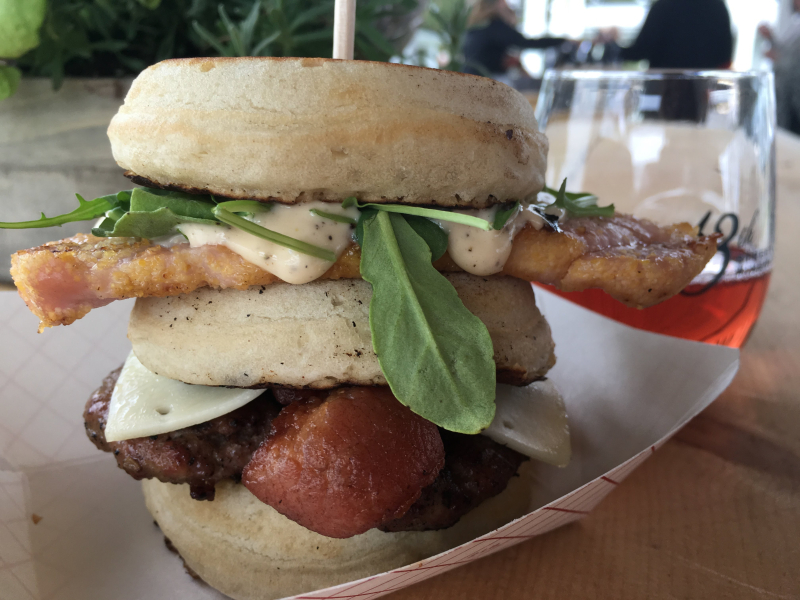 I ended up getting this tower of pork for a food truck called the Salted Pig. It was the only food truck without a really long line, and I wanted to go check out the crafts. It was not bad - however, it was impossible to get in my mouth so I had to deconstruct it a bit. What I really did was remove one of the corn cakes and then ate it that way. It was called The Porker.  I've had enough pork now for the rest of my life.

I have no pictures of the crafts but there were multitudes - jewelry, furniture, foods, trinkets, whatnot, bags, cloths, art and more! It kept going for 8 long rows with vendors on both sides. I don't think I've ever seen so many hand made things put together in one place. Even the Oregon Country fair may not, at the end of the day, have the same amount of craft vendors (though Oregon Country Fair has a lot of things that are fairy themed, this did not). I walked every row and almost purchased a few things but managed to hold off as I spent my extra crafting money on bottles of wine I will be giving away to other people. sigh. It was time to go to tourist ground zero - Niagara Falls. 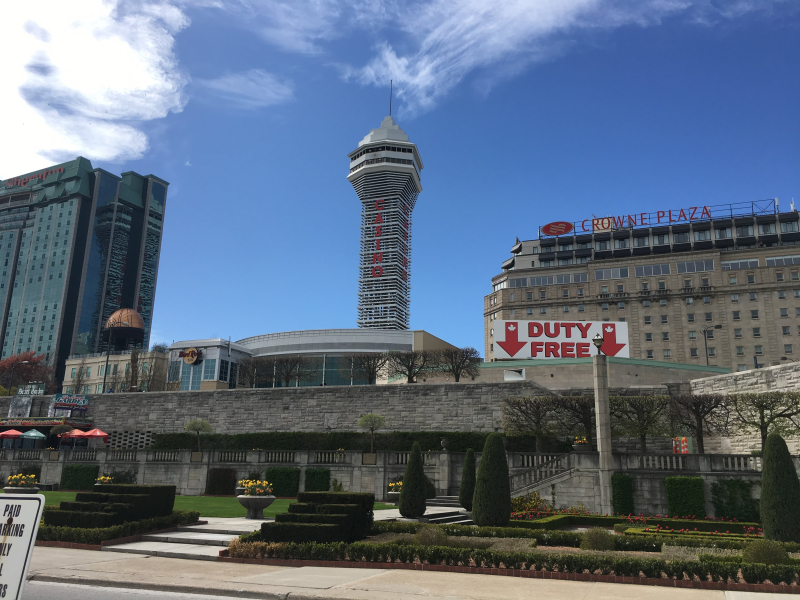 I drove right into the belly of the beast and found an amazing, albeit expensive, parking spot. Then Dandelion and I had some time to do a little photo shoot. 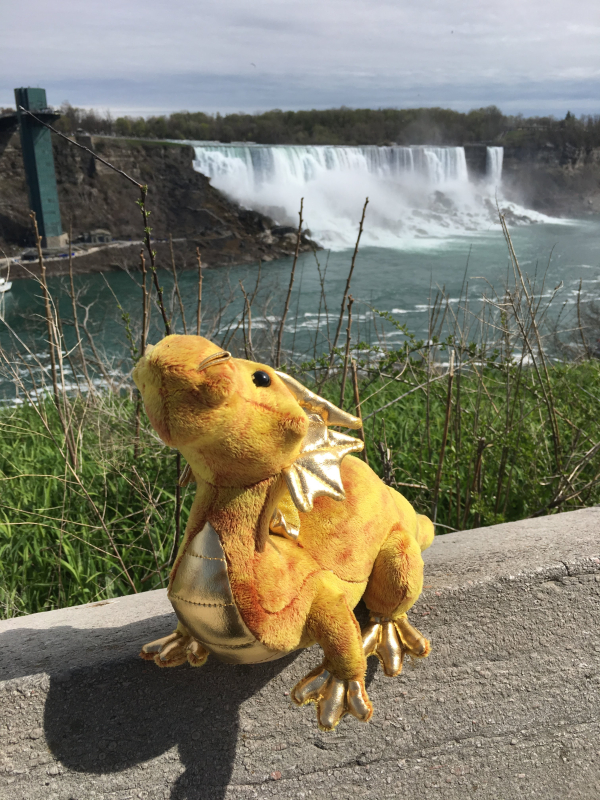 That is the American side behind Dandelion. Way smaller than the giant U-shaped version that is inside Canada (see photo above). 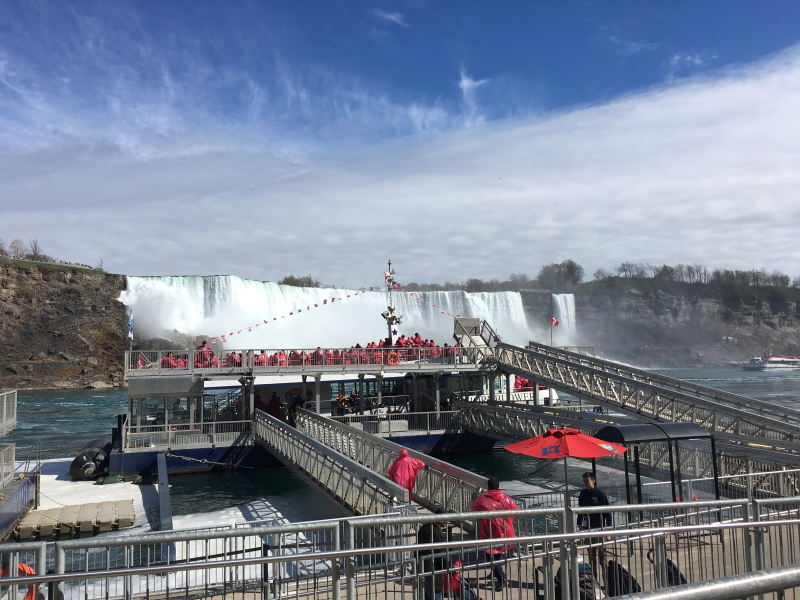 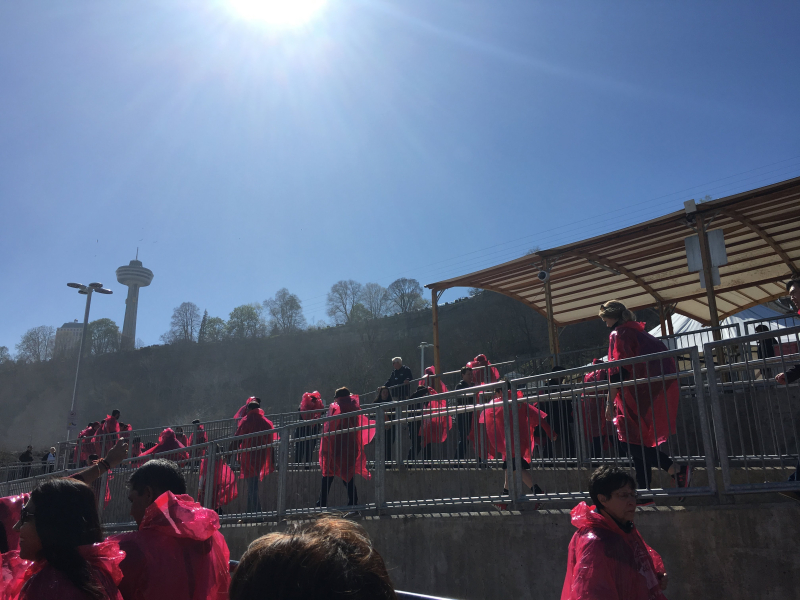 Dandelion and I had a 15 minute boat ride to catch to go right into the mist of the falls. I had a feeling that I would have to choose between my camera and the stuffed toy as far as photo options would go - and I was right, one because there was water, but two because of the pushy tourists who were on the boat with me. 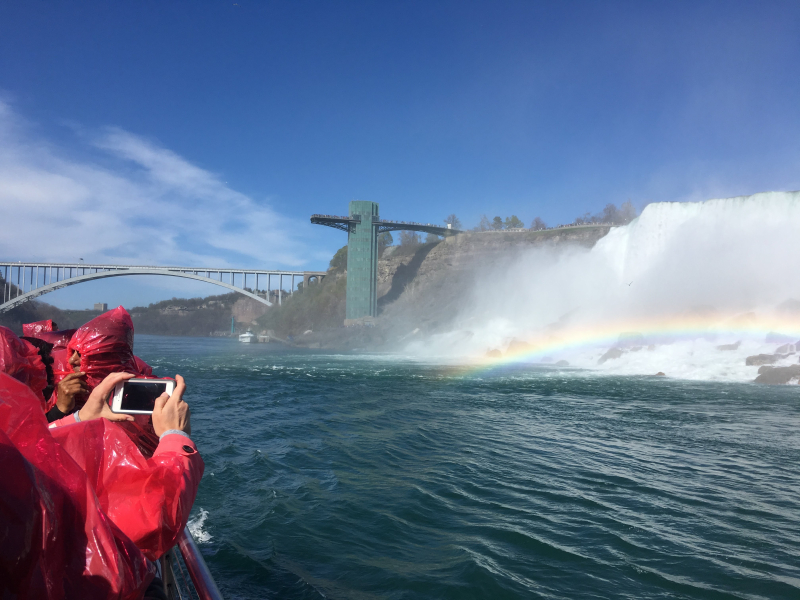 I chose managing my phone camera because of the rainbows. So many rainbows! Big shiny rainbows in the waters of the falls. 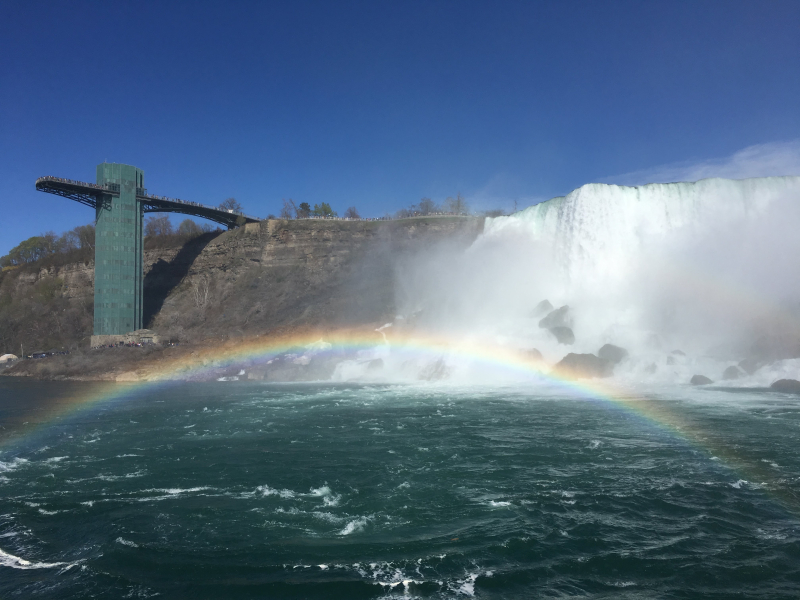 At the point you are seeing rainbows you are getting quite wet - even from the little falls on the American side - but that is nothing in comparison to the big horseshoe shaped falls (at least as far as water is concerned). 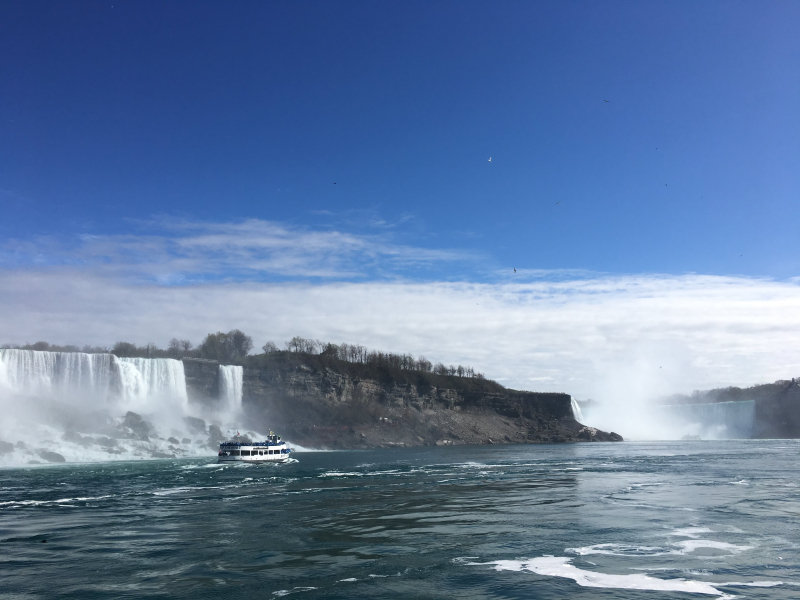 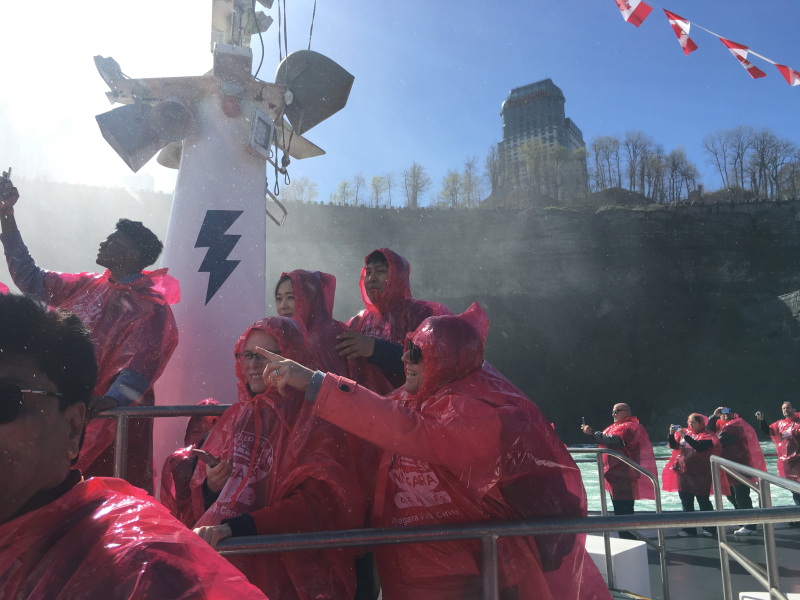 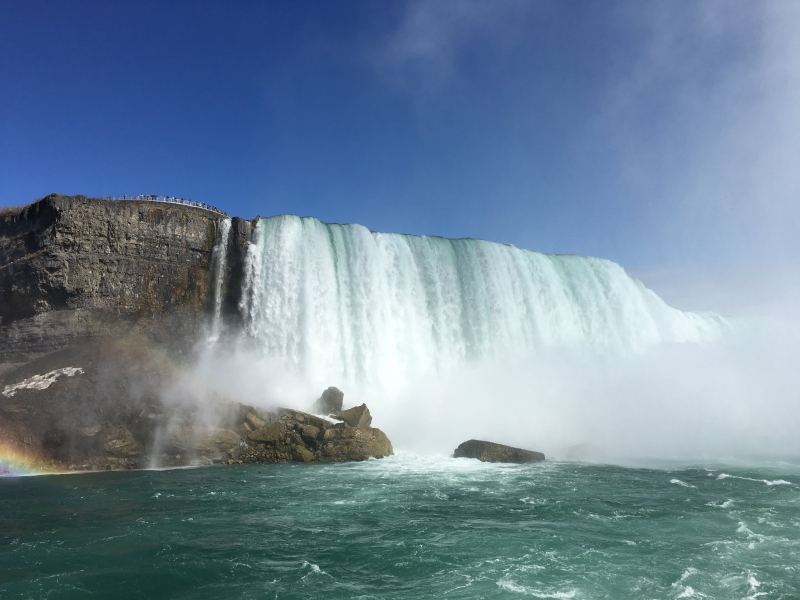 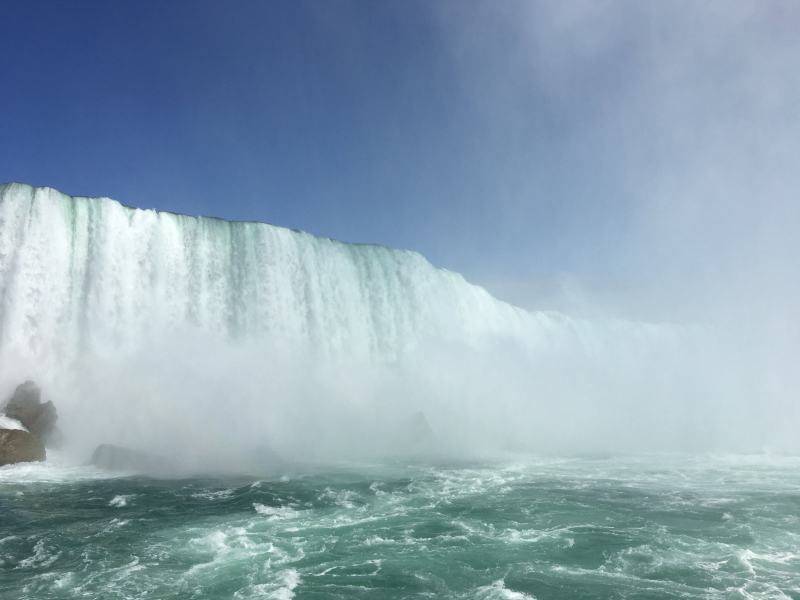 Meanwhile, here the water gets choppy, and the boat lurches and the other tourists are all leaning in for the photo or the selfie, and the water is just misting down like being in the shower with a semi-effective shower head. I was stuck to my place on the railing because it was slippery, bumpy, and it was every man and woman for themselves in the selfie race. No 360 views for me on this ride to the falls - but I would get out alive (along with camera and stuffed dragon and the contents of my purse). 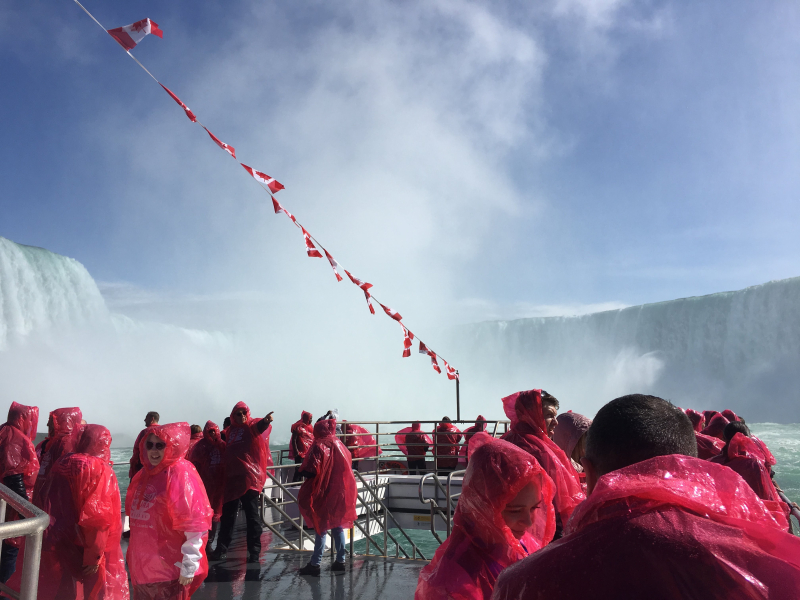 I did get this shot as the boat pulled away and it was finally safe to bring my iPhone back out from under the light plastic red poncho to take another photo. 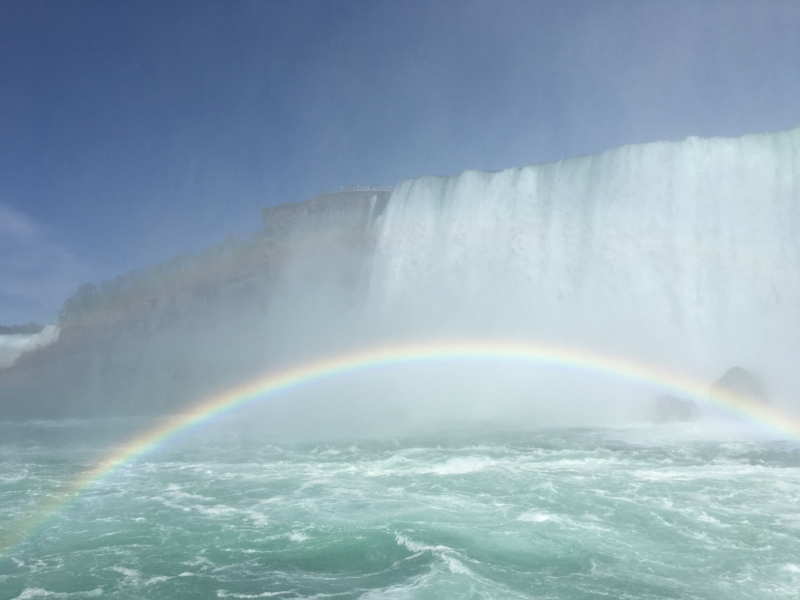 It was definitely a rainbow filled ride. As soon as the boat docked Dandelion and I took our leave of the boat, the gift shop, the photo booth (where the attendant looked disappointed that I didn't want my green screen shot to take home), and Niagara Falls the tourist trap. I got back to the car, looked at the time and determined there was time to freshen up and drive to my reservation for dinner at The Restaurant at Pearl Morrissette. It had been a lovely romp through Niagara wine and tourist country but now it was time to get serious and have some hyper-local food.

Posted at 08:25 PM in Toronto and Vancouver Canada | Permalink | 0 comments