Exploring Atlanta the Millennium Gate Museum and Eating at BeetleCat

Coming in on a red-eye flight from Seattle, Lamar and I began our day in Atlanta very early and found many things to be closed. It was Monday morning, and despite Google's all-knowing presence, it was wrong about the hours of establishments multiple times. This included our luggage storage facility and first choice place of breakfast. Knocking loudly on the front door of Atlanta Baggage Storage I was able to override the sign on the door saying it didn't open until 10am (and politely informed the proprietor that his hours were wrong on his website as we pushed through the door intent on dropping off our suitcases). Breakfast was another story. 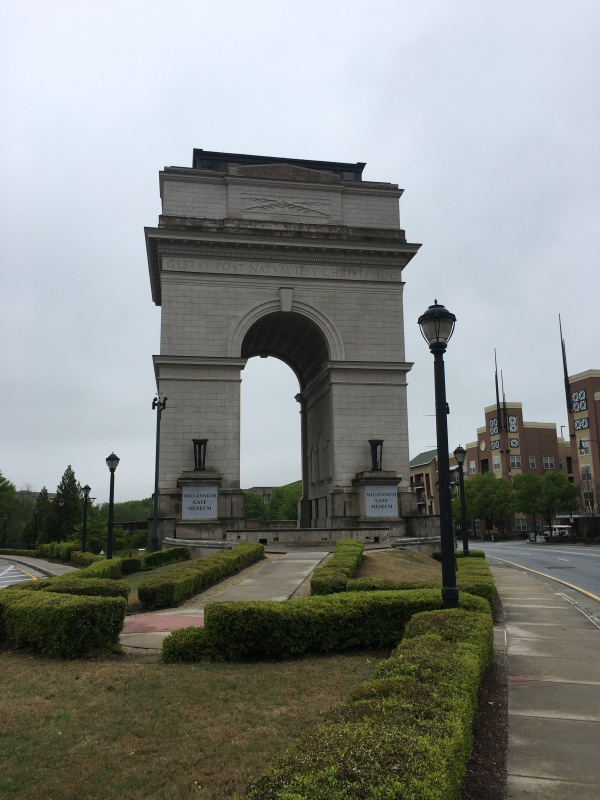 After taking a train across town and walking many blocks slowly through the wet and dreary Monday morning Atlanta mist (that seemed a lot like Seattle) we walked up to the doors of The Nook on Piedmont Park to be told that they do not open until 11am.  Sigh.  Google called it a breakfast place opening at 8:30am, and it was now 9am. Alas, another piece of misinformation. Nothing could be done about it, so we walked back to The Flying Biscuit, my back-up in the neighborhood, said to be a favorite of locals sporting 4 stars on Google. 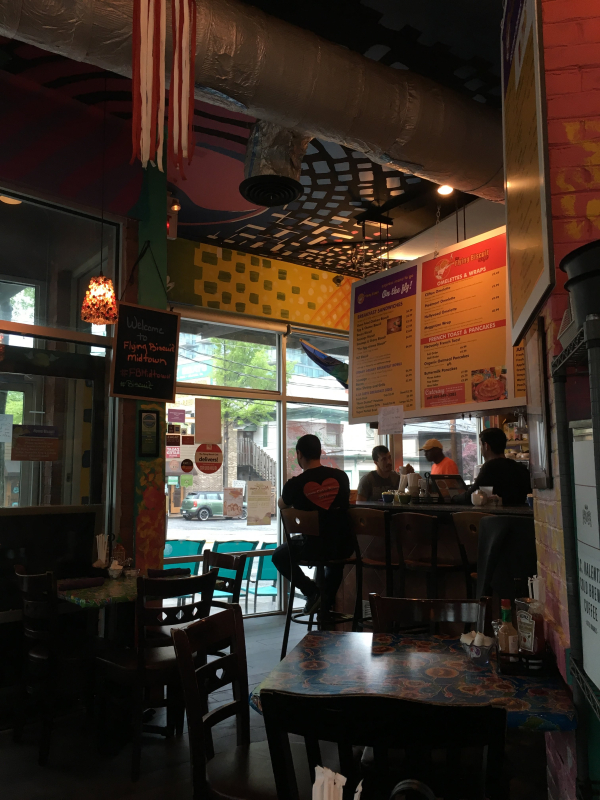 It had all of the options for mimosas, organic oatmeal pancakes, sandwiches and biscuits galore.  We both ordered biscuit benedicts, mine Southern style, Lamar's with crab cakes. 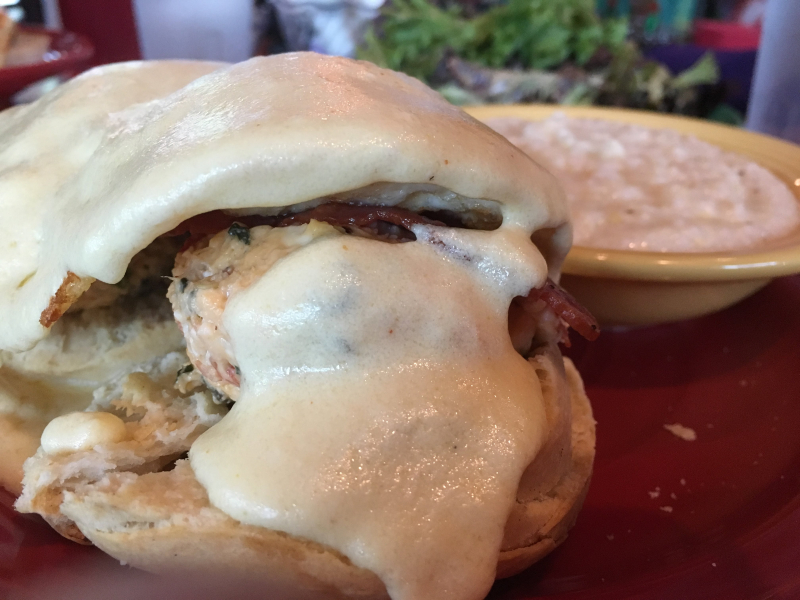 I should have known something was wrong with all the beige. My benedict was less than luke warm when I bit into it, with soggy bacon and cold eggs. I asked the waiter, if perhaps, maybe, they could possibly make a new one with recently cooked bacon and egg. The waiter said they could make it again. He took it away and I ate my tasty grits and breakfast side salad happily enjoying both. Then my benedict came back microwaved beyond recognition. Sad story. 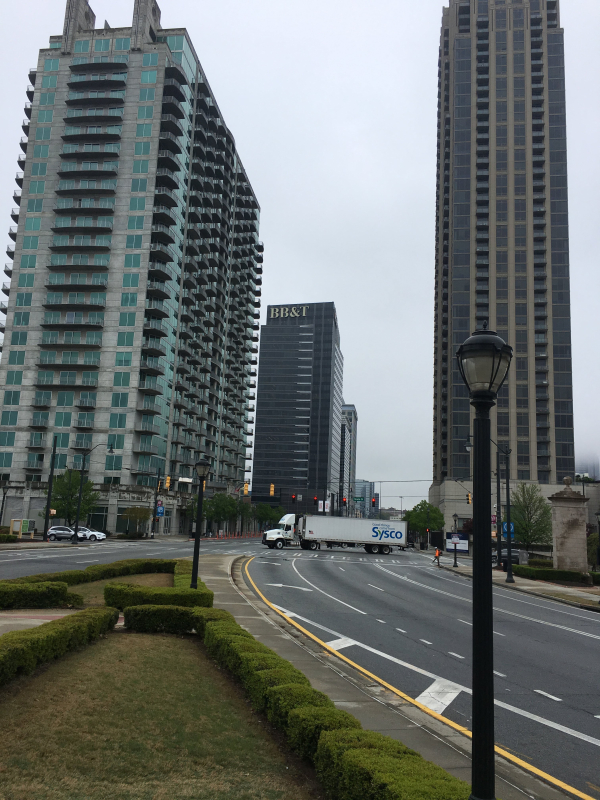 After our less than ideal breakfast experience we started our journey to the Millennium Gate museum. It was a 38 minute walk from The Flying Biscuit, but it had stopped raining and we were lacking sleep, so the exercise would be good. According to Google, it was the only museum open on Monday in Atlanta - so here was hoping that this was true. 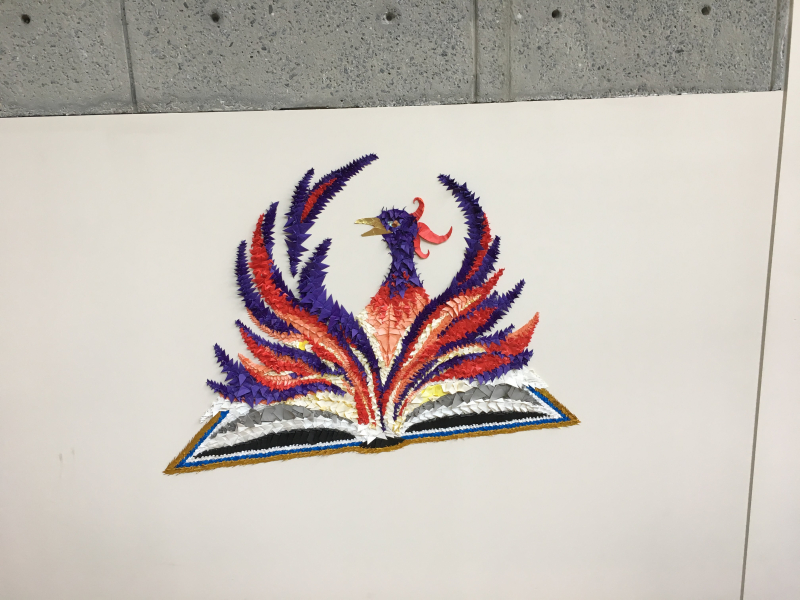 On the way we stopped into the public library and I found it gaurded by a Phoenix - a great sign. We also found an arts district and some shiny buildings. 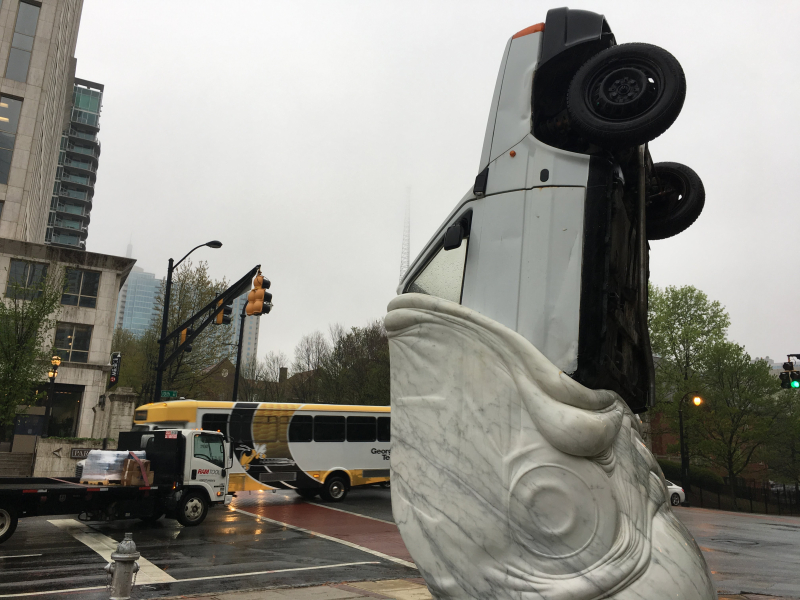 The Millennium Gate museum is built on the site of the old steel manufacturer Atlantic Steel that began in 1901 in an attempt to attract additional industry to Atlanta. The steel manufacturer, after a good run during WWII, closed its doors in 1997 and in 1998 a developer bought the land and built a shopping mall and condominiums on the site. The Millennium Gate was completed in 2008 after much ado, and is dedicated to preserving the culture of Atlanta. 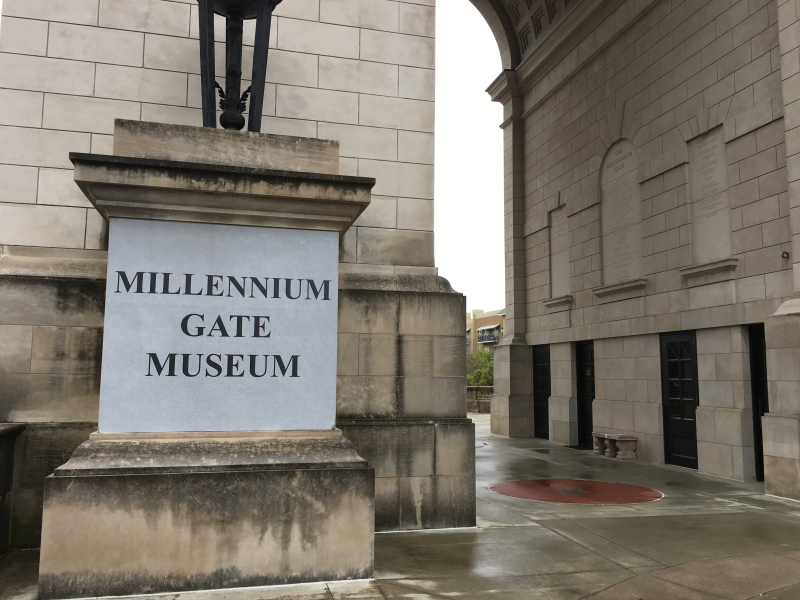 The museum's permanent exhibition is a history of of the city of Atlanta. You learn about its roots as part of the Georgia colony, its original founding families, its phenomenal city planning post civil war, and its forward thinking attitude toward attracting business and industry. As all I know about Atlanta I learned from watching The Walking Dead and Gone with the Wind, it was a good thing the museum was open so I could learn a little something based on actual reality. 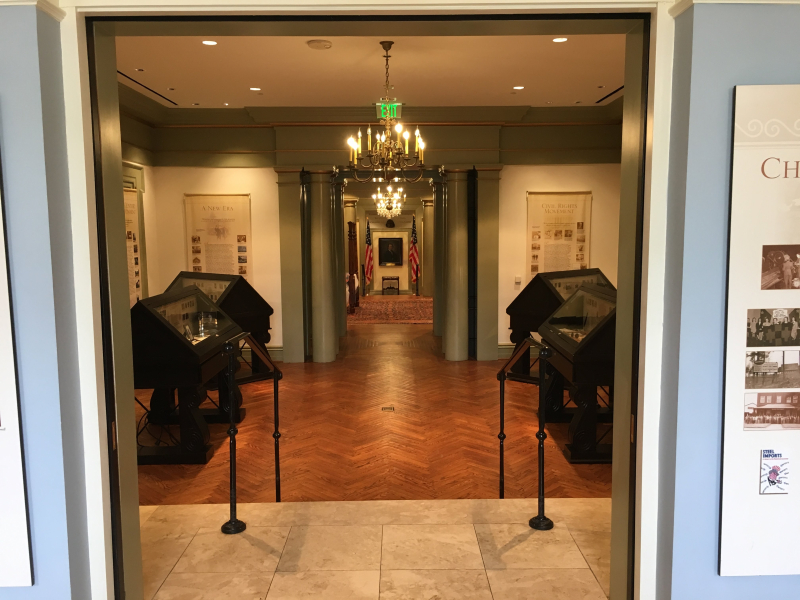 Random facts I learned - Atlanta is the home of the offices of at least one of every Fortune 500 company. The city also has an entry gate facing each one of  the 4 directions (north, east, west and south) - how sacred geometry of them. Atlanta was a railroad hub, and at one time it held the name Terminus (which those of you who watch The Walking Dead will think that is a pretty cool reference). 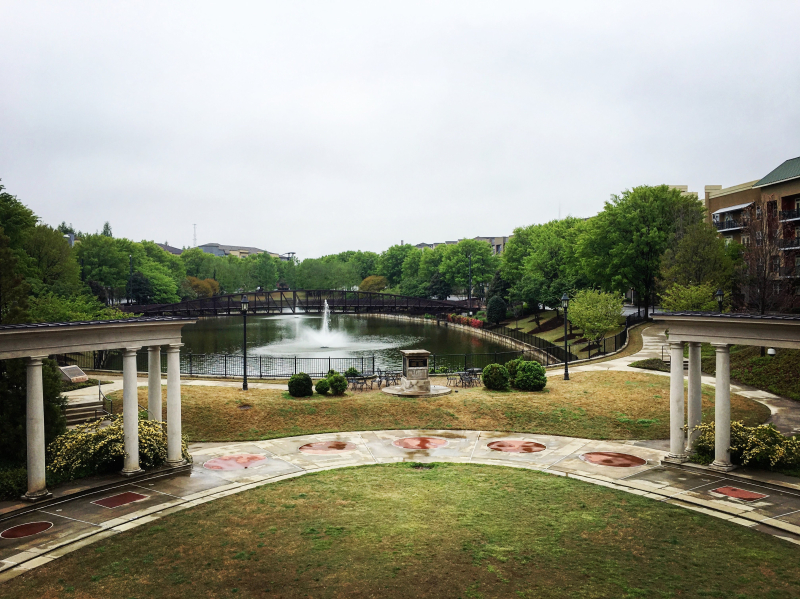 I didn't take any pictures or notes inside the museum which is very unlike me and as a result I feel very much more informed about the history of Atlanta, but yet cannot recall that much about what I read. But there were really pretty yellow flowers outside the museum, so I enjoyed the opportunity to practice my photography. 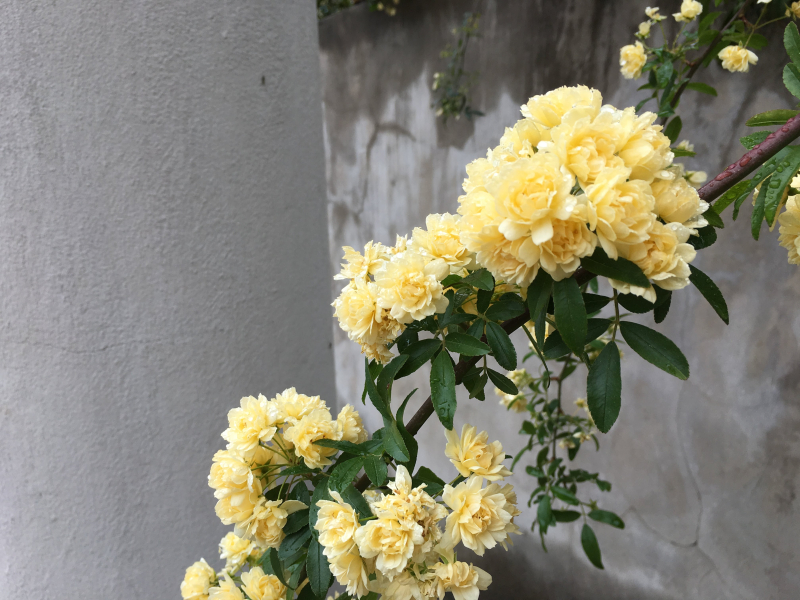 At this point in the day, it was a little after noon and we were starting to fade after our sleepless night on the airplane. We walked back to the nearest MARTA subway stop and made our way to pick up our luggage. 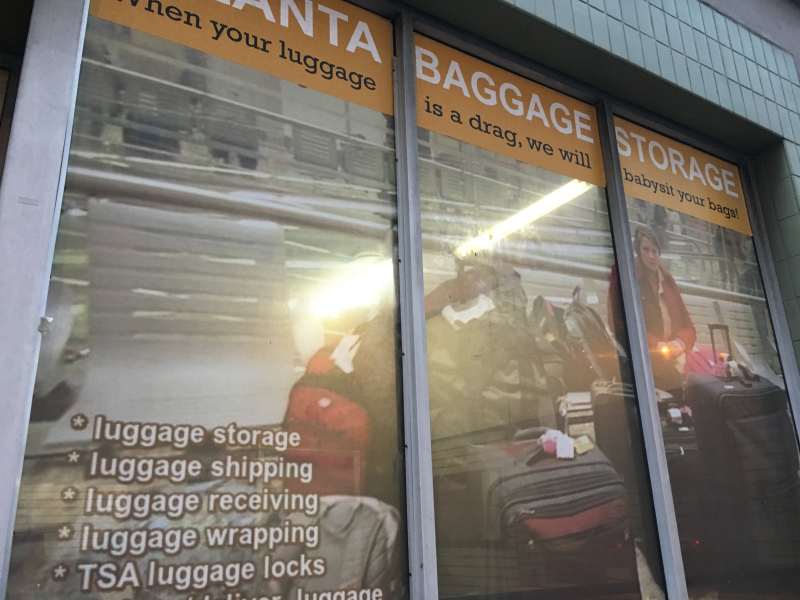 Then to the streetcar to check-in at the Airbnb with a little stop at the historic Sweet Auburn Market for supplies. 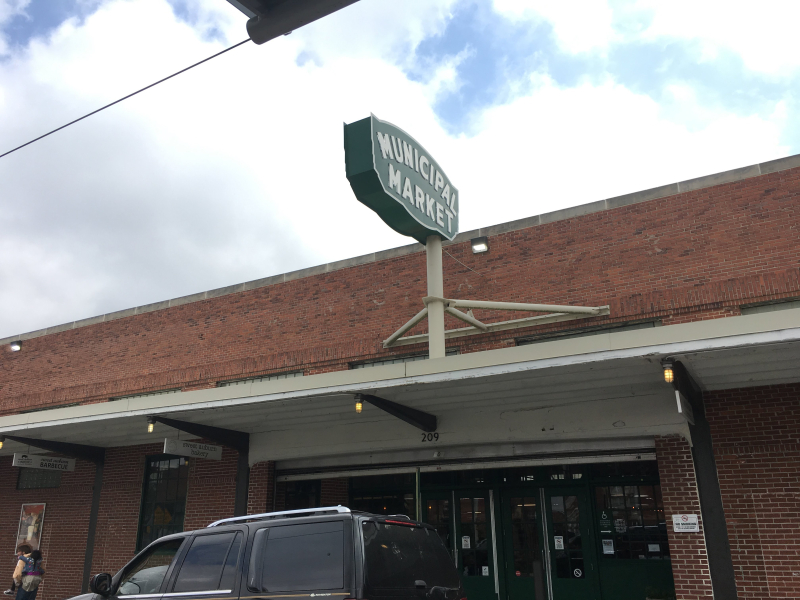 Sweet Auburn Market is a historic market just outside the 4th ward with two historic names - The Municipal Market, or the the curb market connoting that it was once segregated - those who could go inside called it the Municipal Market, everyone else had to shop on the curb. We purchased coffee, popcorn and meat pies (because I was starving) then caught the next slow streetcar to the Airbnb. Our traveling companions, Jeremy and Dan, just happened to be on the same streetcar. 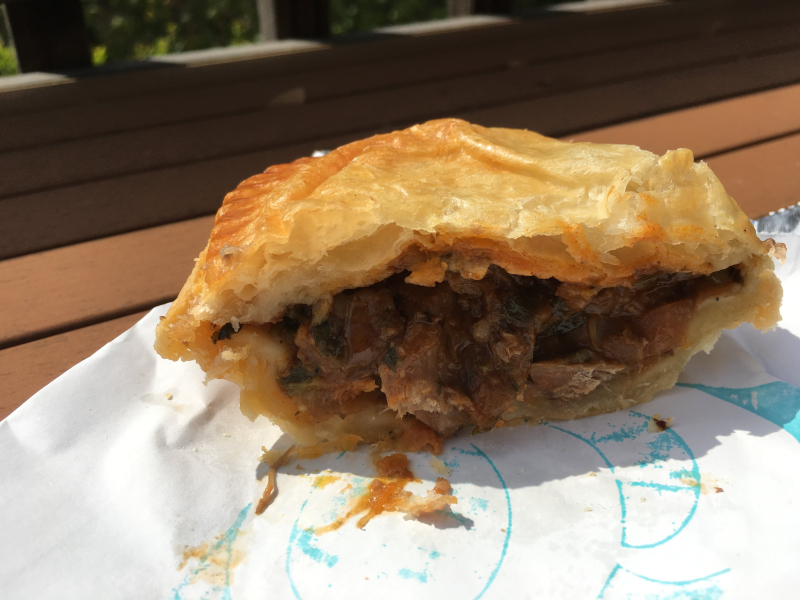 At the Airbnb we settled in, did a round of funny selfies and got ready to walk to dinner featuring Oyster Happy Hour at Beetlecat. 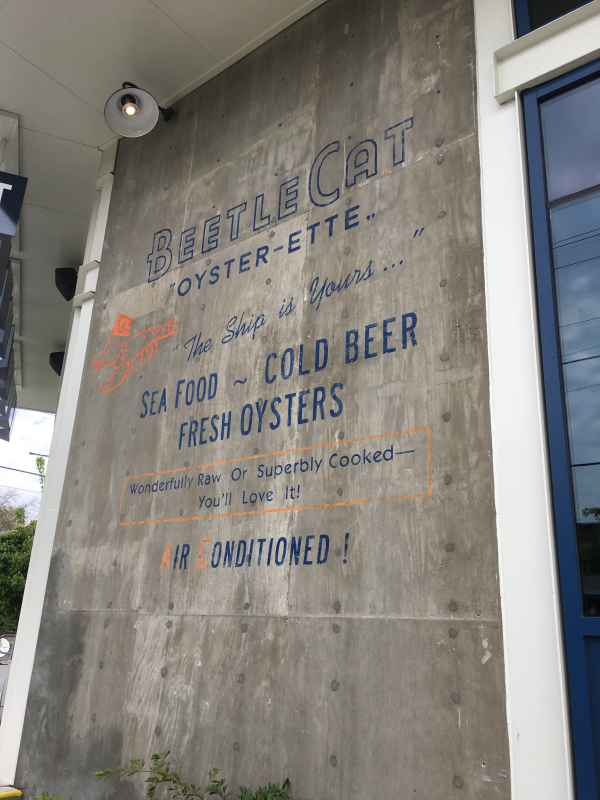 We had one of almost all of the things at BeetleCat because we were almost close to a coast with naturally occurring seafood. 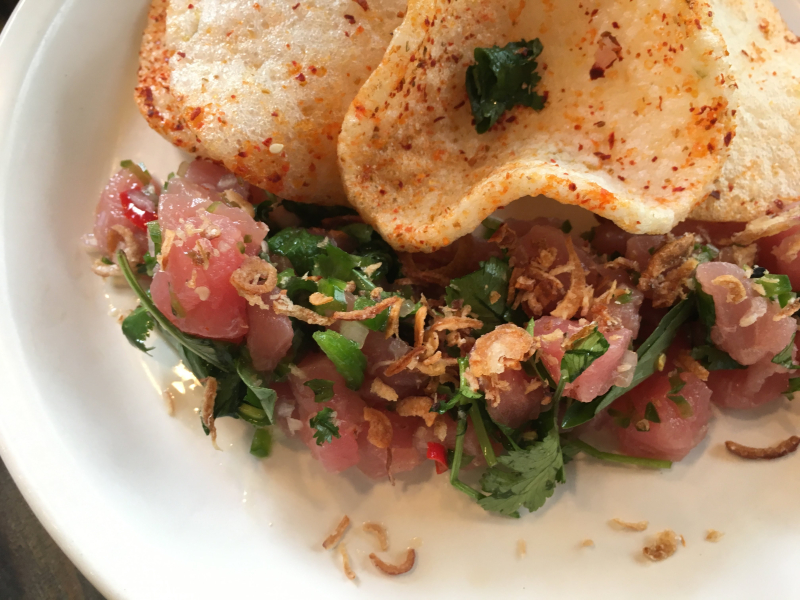 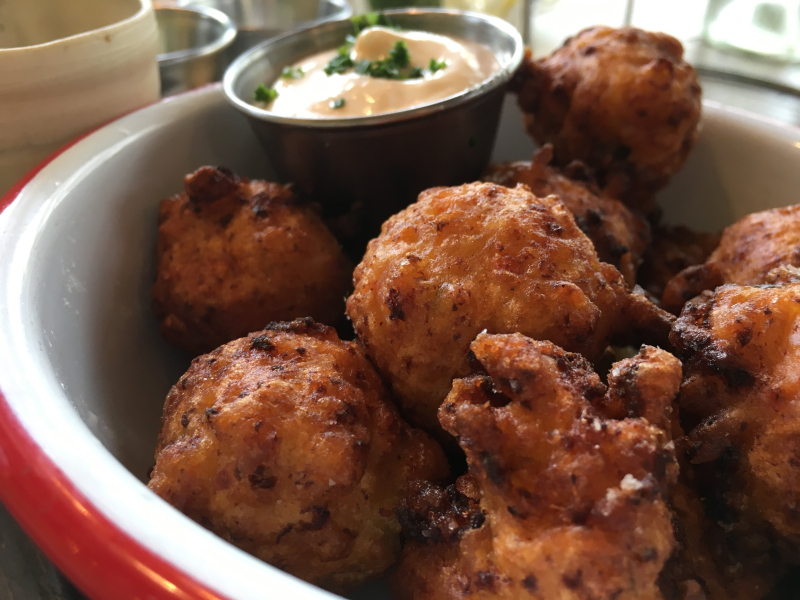 There were conch fritters, tuna tartare, oysters and mussels, green beans and cucumbers. I think there was a trout dip in there somewhere too. It all goes by in a blur of putting a lot of small bites into our mouths. 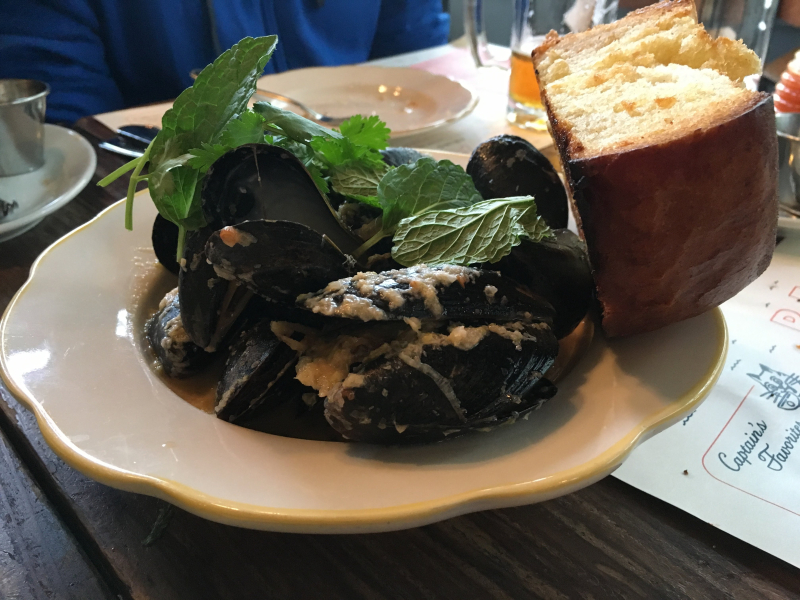 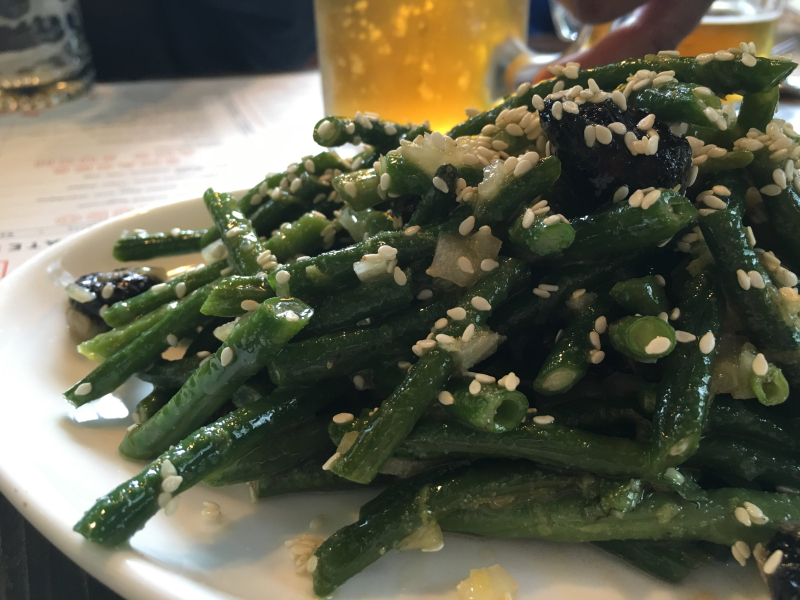 Happily full on our first night of vacation we walked back to the Airbnb to relax and sleep for the next full day.