I was the first of my group to arrive in Boston to begin our great New England Adventure because I took the red-eye from Seattle. My flight landed at 5:30am Boston time, so I took my time leaving the airport because I assumed nothing was open yet and I wanted some sunlight for my journey across Boston Harbor on a water taxi. 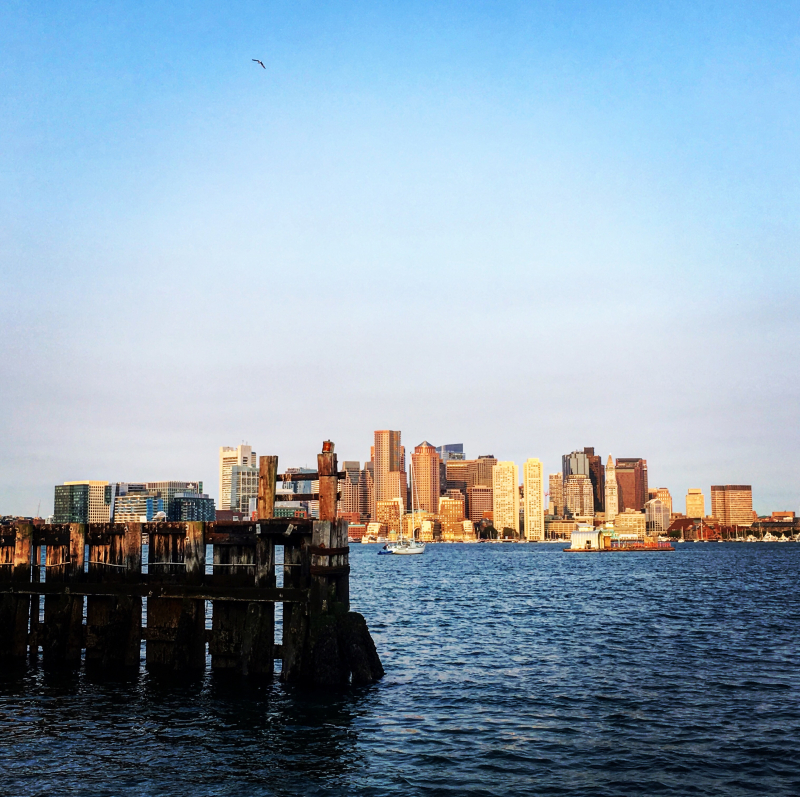 I booked a water taxi because - why take the subway or a car when you can have a way more pleasant ride over water? It provided photo opportunities all the way, and included baggage storage - a win win in this world of Airbnb with no baggage storage pre-check in. Check-in at the Airbnb was not until 4pm and my friends arrived on the their flights from Minneapolis and Phoenix around the same time. I had the whole day to putz around Boston lost in my own thoughts. 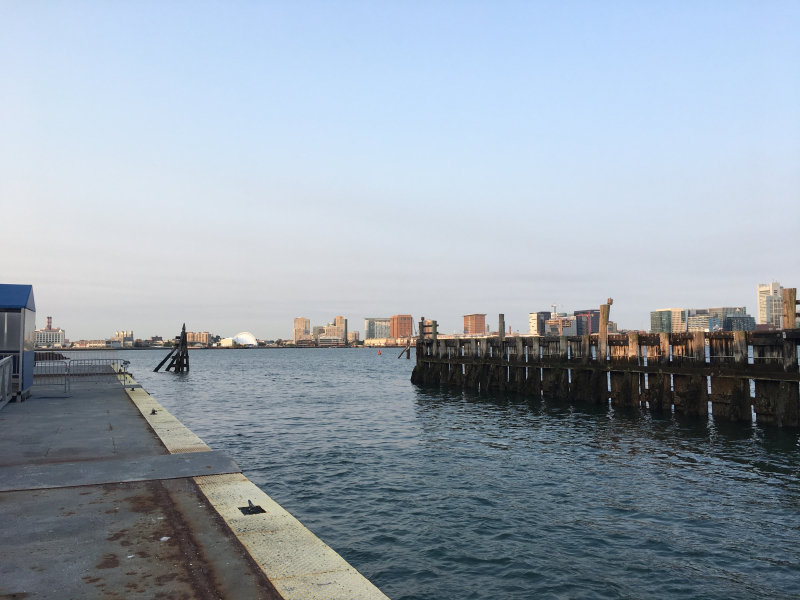 I got to be alone with my thoughts a little longer than I planned on the waterfront because my water taxi from Rowe's Wharf never showed up. Luckily, the competing water taxi run by the Boston Harbor Cruise company was staffed by very nice and thoughtful drivers who suggested an alternative solution to my transportation and luggage storage problem.  I would ride across with them, and store my luggage at the Marriott (and tell the Marriott that I had come in on the water taxi to get access to their baggage storage). 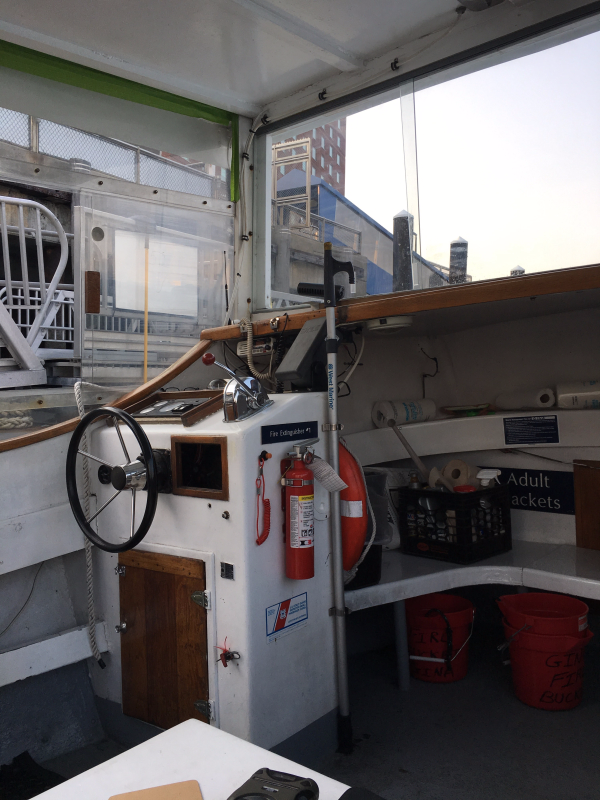 Upon arrival in downtown Boston and the deposit of my luggage I headed for breakfast.  My research revealed an authentic Jewish deli called Inna's located inside the Boston Public Market. Little did I know until I arrived that the Boston Public Market is a magical place of farm-to-table New England small purveyor goodness.  There was chocolate, tea, coffee, bagels, donuts, wine, cheese, meat, fish and produce - everything you could think of and more - all local and organic. It even had that smell that you find inside whole food co-ops, that cross between nut butter, muesli, dried beans and cardboard. Sandwiched inside this treasure trove I found Inna's. 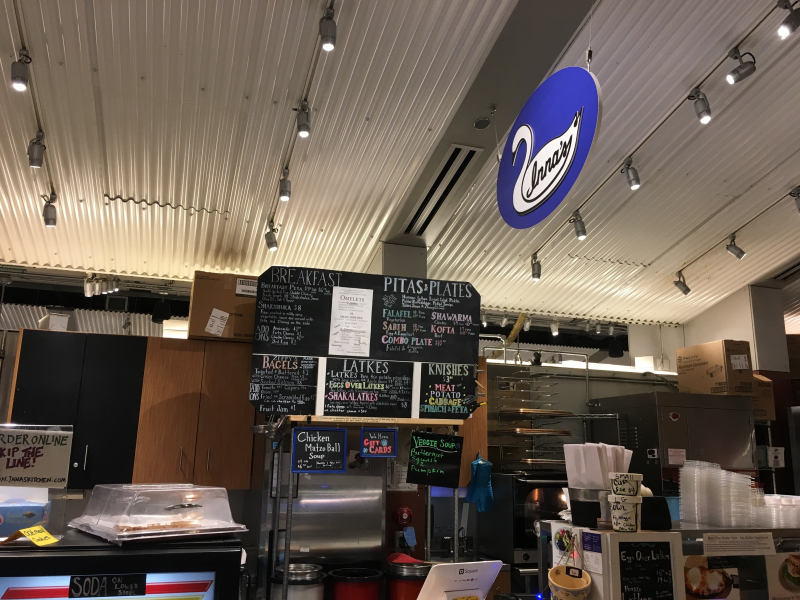 I ordered the shakshuka, described as "like Mediterranean Huevos Rancheros." 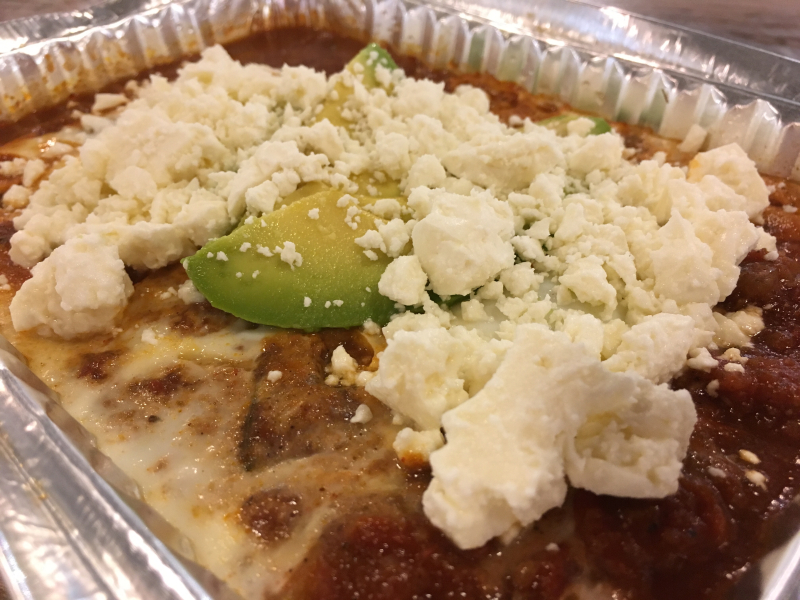 I had avocado and feta added on - I didn't really need it because it was already rich and tasty with all of its tomato mediterranean spiced goodness it came with automatically. The pita that came with it was the best pita I had in my life - it was soft and spongy and had flavor, like it had never seen in the inside of a plastic bag. It was a satisfying and flavor filled breakfast. 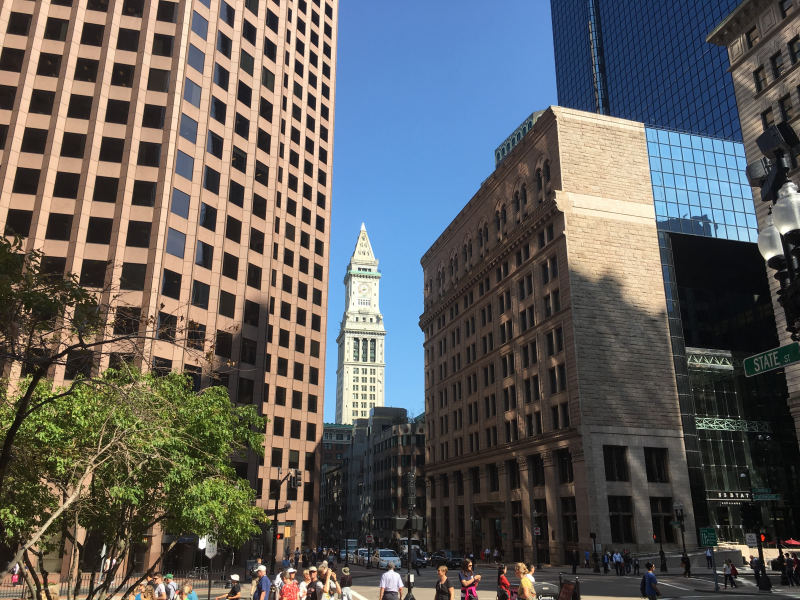 Stomach full and body caffeinated, it was time to wander out into the greater Boston area and see what historical attractions were to be had. In my immediate vicinity were multiple stops on the freedom trail, marked by a line of bricks in the sidewalk. As it was early in the day, I headed for the Paul Revere House hoping to beat the throngs of other tourists who might be interested in this very tiny museum. 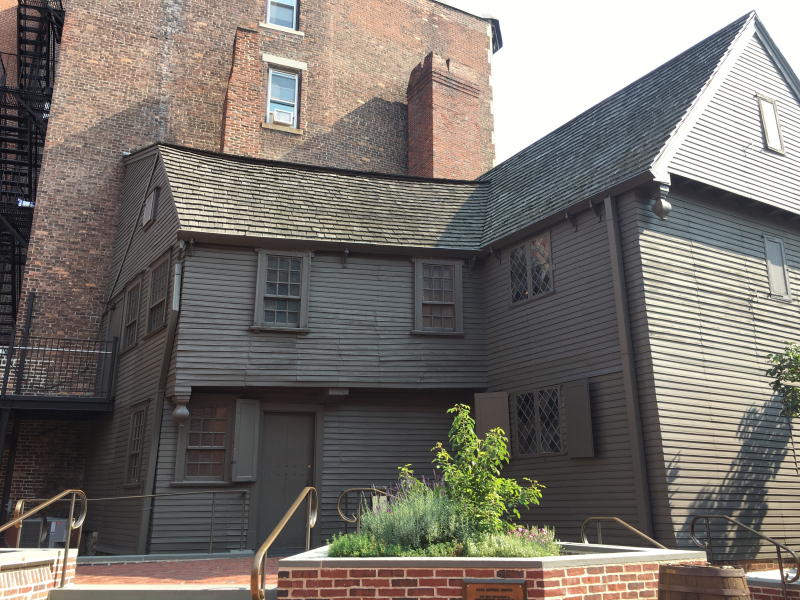 The Paul Revere House is a tiny museum - literally 3 rooms plus a visitor's center. It shows one what the house of a wealthy merchant class individual with 16 children (only 11 survived infancy) might look like. It also includes facts about Paul Revere's life that are not mentioned in the historical fiction most people know about this American Hero of the Revolution. However, Henry Wadsworth Longfellow didn't really cover the mundane in his poem written 90 years later in a patriotic ferver (nor did he report the details of Paul's ride accurately). In summary, Paul Revere was the son of a French Huguenot (persecuted French protestants) named Apollos Rivoire who changed his name to Paul Revere. Paul Revere the second, American Hero, was a successful silversmith, he had two wives Sarah and Rachel. Sarah died immediately after her 8th child (as was common at the time for both women and babies to die in childbirth)  and he married Rachel 3 months later. Rachel gave birth to 8 more children and survived. Rachel is also responsible for getting her, Paul and the kids out of Boston during the war, avoiding persecution, so that Paul could live to a ripe old age of 82. 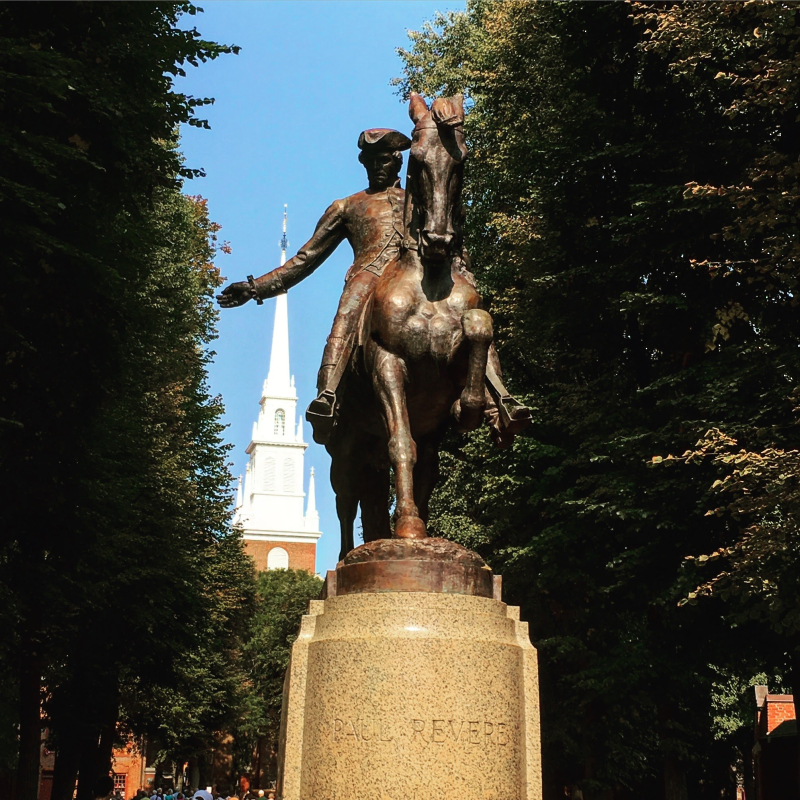 As I stared up at the looming statue of Paul facing the church where he rang the bell on his famous ride I couldn't help but notice the strong smell of rotting fish in the breeze. It just so happens that Monday is garbage day in North Boston - so all along the narrow streets and inlets are piles of garbage bags and refuse. Paul Revere park was no different, although it was the only place along the Freedom Trail with garbage piled. 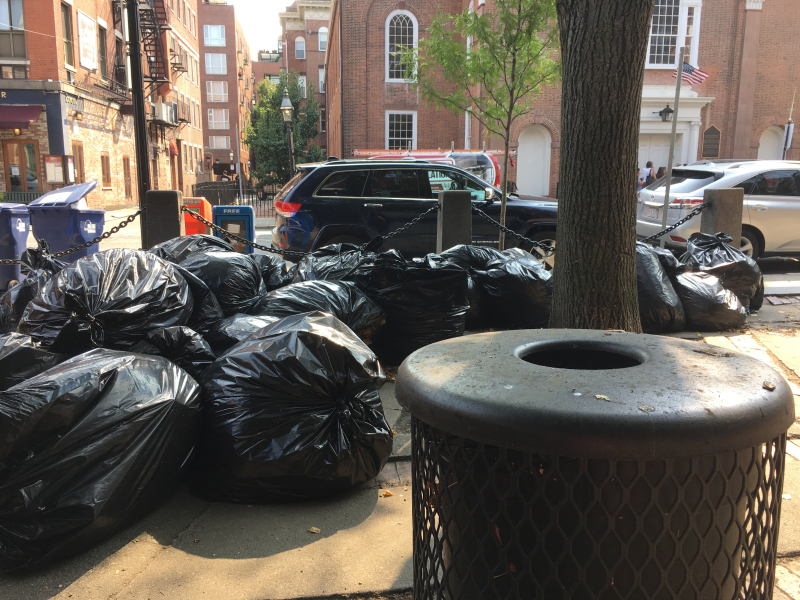 As it got later in the day, so grew the concentration of tourists and large tour groups along the Freedom Trail. I started attempting to avoid the trail and the throngs of tourists - which was very hard to avoid both. I just kept finding the trail of bricks under my feet where ever I went, and a large tour group in front of me. I walked all the way to Chinatown to find lunch after finding nothing open in North Boston (its like Italian American's don't eat anything but dinner). It was alright because I had read about Gene's Chinese Flatbread Cafe and their phenomenal hand-pulled chewy noodles and I needed to try them. 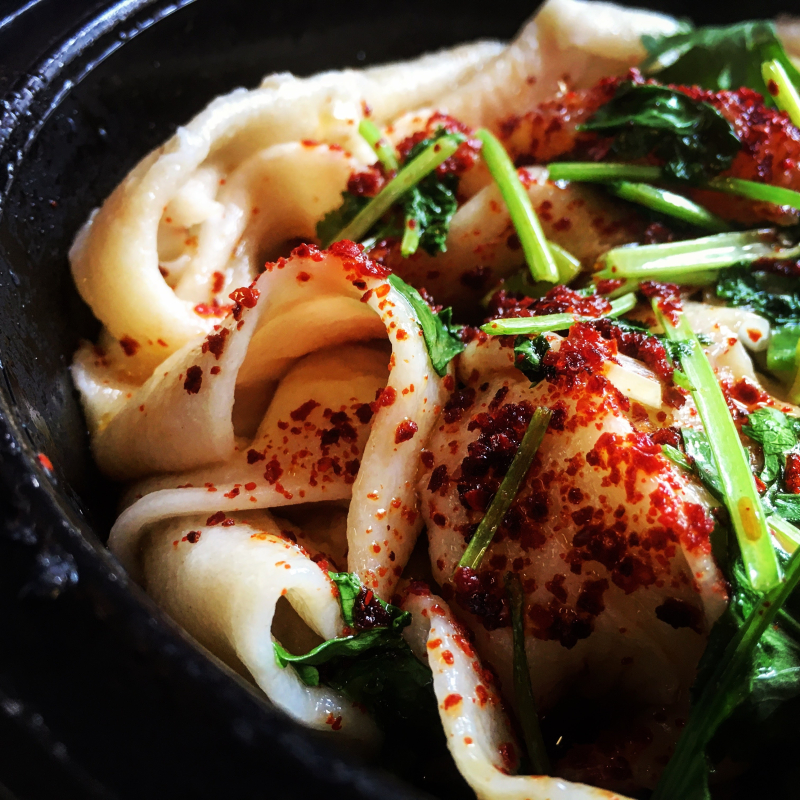 Gene's is a suffocatingly small establishment serving only noodles, noodles with lamb, and one version of a pulled pork sandwich. It was filled with Chinese people eating lunch, so I knew the food I was about to have would be good. The noodles were in fact of the most chewy kind of goodness I ever experienced - and the umami of the sauce was so tasty and completely unidentifiable. As in I couldn't parse out a single flavor other than amazing with red and green oily specks. Whatever it was though, it was thirst inducing and when I stepped outside the plastic curtained doors Boston was hot with a side of mild humidity. I needed water and less clothing, it was time to get my feet out of the boots I had been wearing since Seattle the night before and into a pair of emergency flip flops.

Luckily, there was a Walgreen's right there.  Except they didn't sell flip flops because they are not "in season." The fellow said "We only carry those in spring," as he looked down his nose at me. Weird. I've never been so disappointed by a Walgreen's. CVS solved my problem, but I was slightly upset I had to shop in an CVS - but when in Rome. I was even more upset that my flip flops I packed for the trip were in my suitcase at the Marriott 2 miles away and it seemed impossible to get there at this point in time in the day. 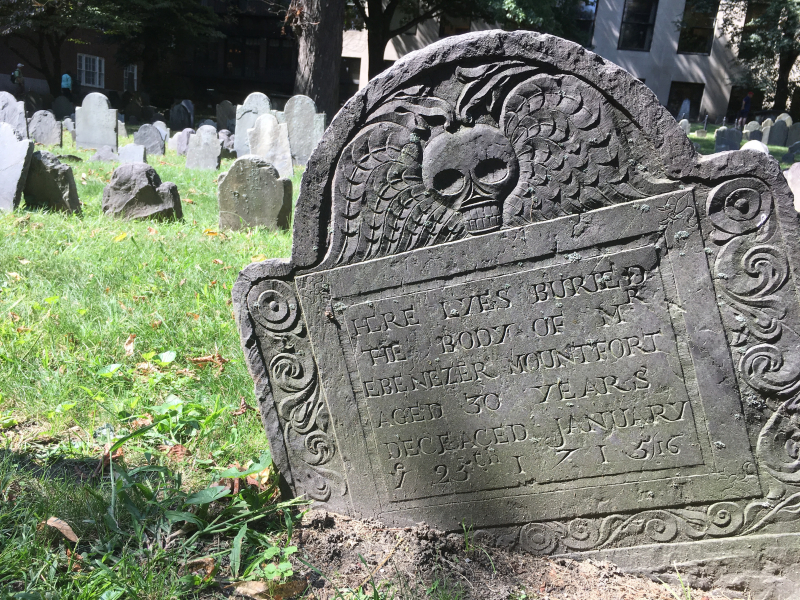 After my shoe adventure I walked to the Granary Burial Ground and listened in on some of the tours going through. I was not impressed - but I learned that it is very important to not pay for a tour guide along the Freedom Trail in Boston. One should instead read some basic American History of the Revolutionary War and then all of the important points will be covered. Which, I suppose, if you are a European visitor to the United States you may not have enough time to do - but I doubt that, as our history is only 250 years long - and the Freedom Trail guide is available on the internet in multiple languages. 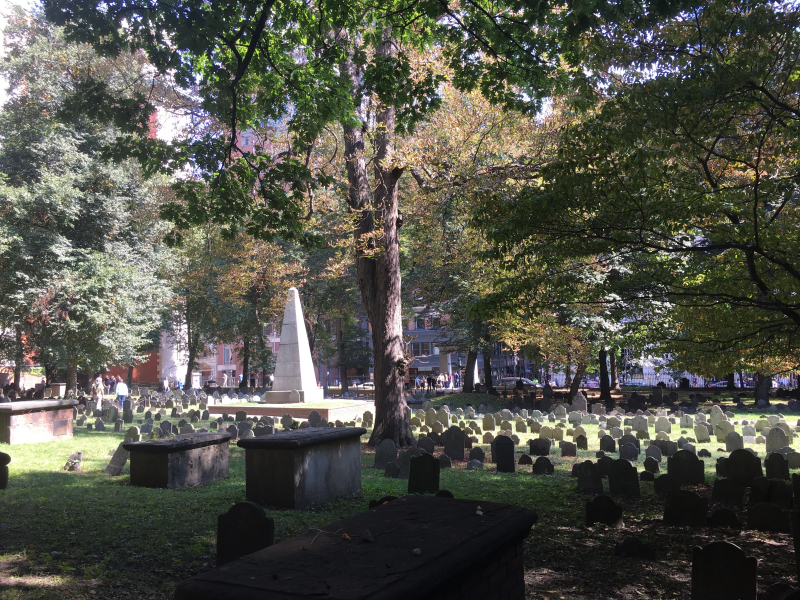 Either way, the Granary Burial ground is quite neat looking - even though they turned the Benjamin Franklin family marker into a giant out of place marble obelisk. Which, if you read the plaques makes sense why they did it, but while I was there I listened to 8 tour groups ask the question "Why is the Franklin monument so out of place?" No one is reading the answer on the plaque in the graveyard. 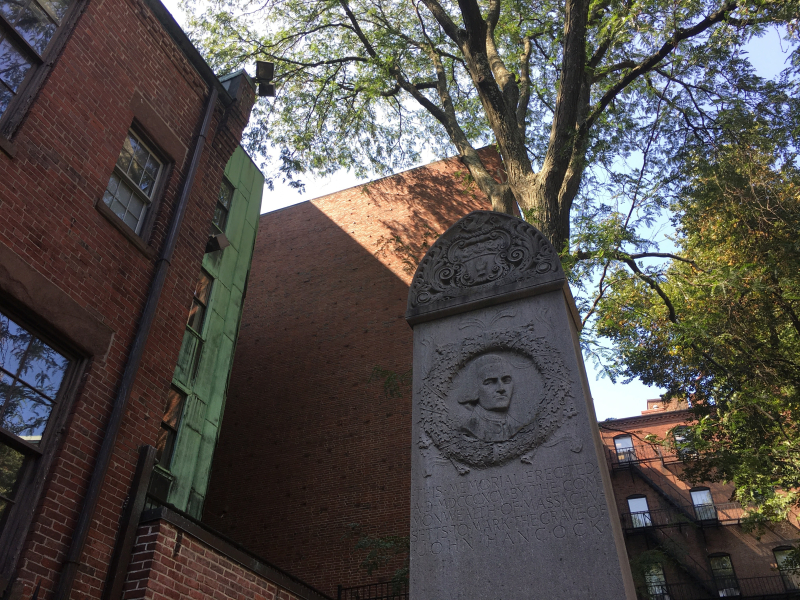 If you cannot tell already, by this point in my day I was quite over tourists (even though I was one), my phone was near dead, I was hot and tired after a night of no sleep - so I decided to just give-up on touristing through historical venues and went back to Boston Public Market to shop for my friends and I's breakfast the next day from the local purveyors and head for the Airbnb. 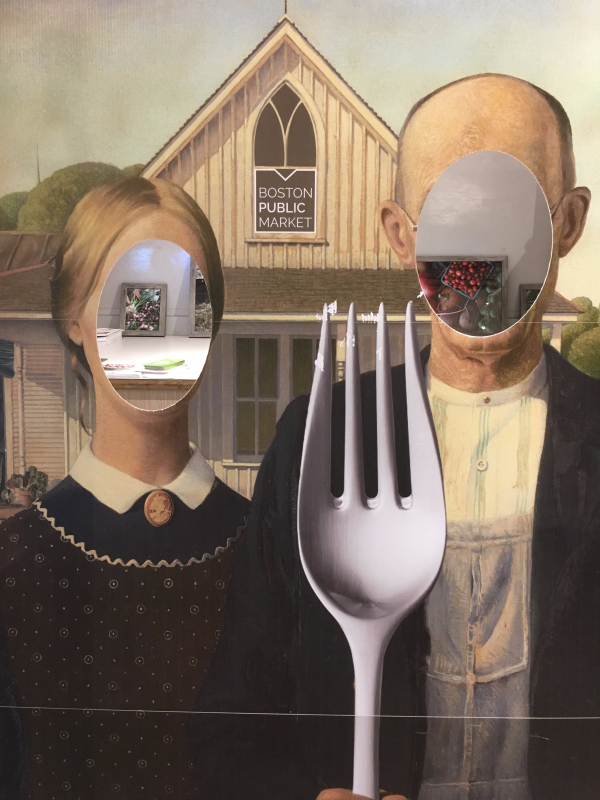 I made it to the Airbnb just in time to be ahead of the first wave of friends. As soon as everyone got there we headed for dinner hoping to get into Neptune Oyster - the hottest spot in Boston for raw bar right now. We were so not that lucky to get into this tiny place on this Monday with our group of 5 people. Our ask to get in was laughable - but we had to try. We abandoned the idea and went down to our real first choice, Yankee Lobster Company - a family run fishing company with a restaurant. 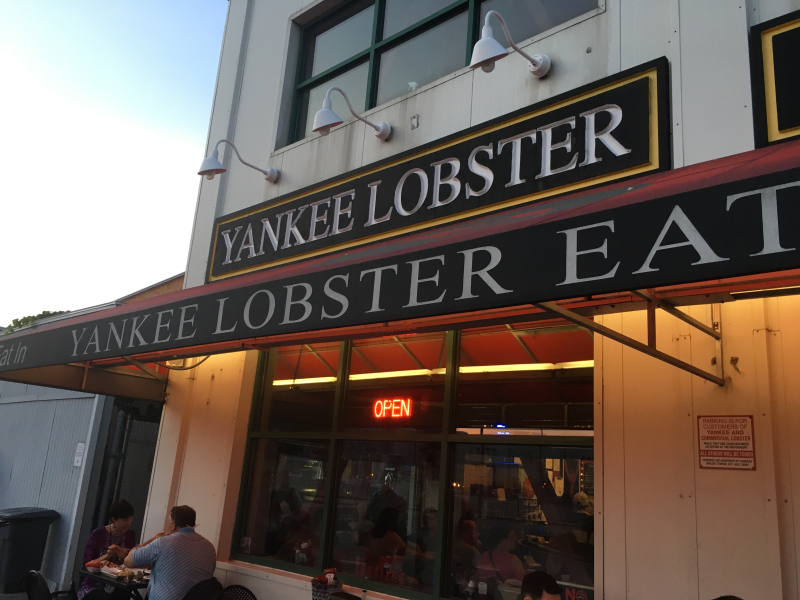 We walked right in to the restaurant, followed by the entire world - our timing couldn't have been better. 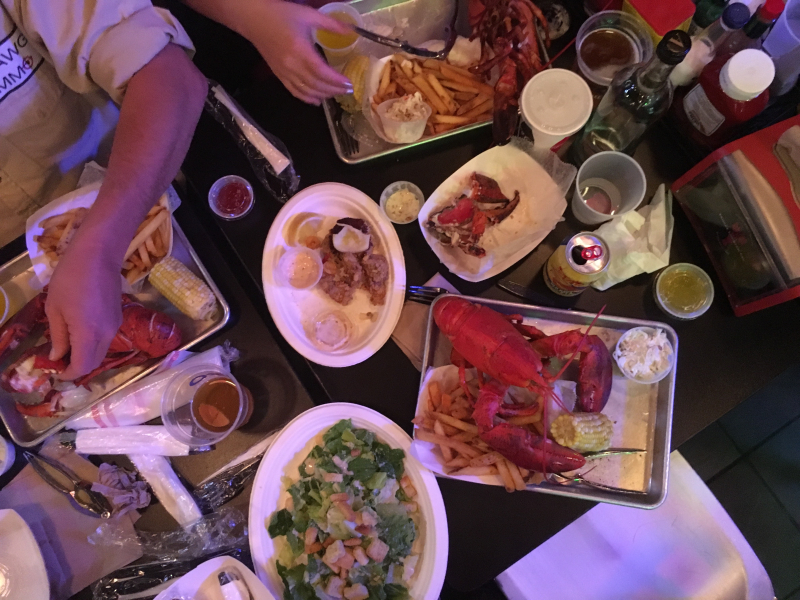 We ordered a set of whole 2 lb lobsters with various sides and beers, including the beer bucket special featuring a summer ale brewed with Old Bay Seasoning. I proceeded to play with my food. It was just too easy to make my lobster dance. 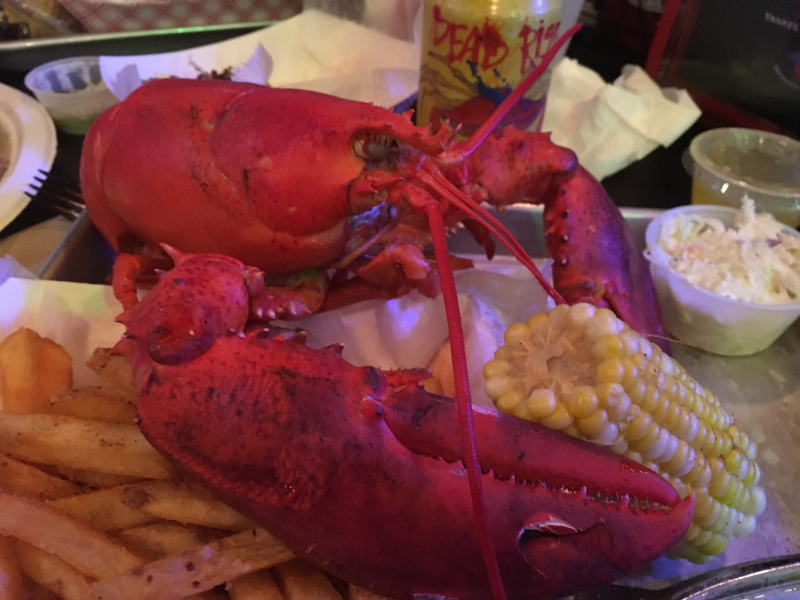 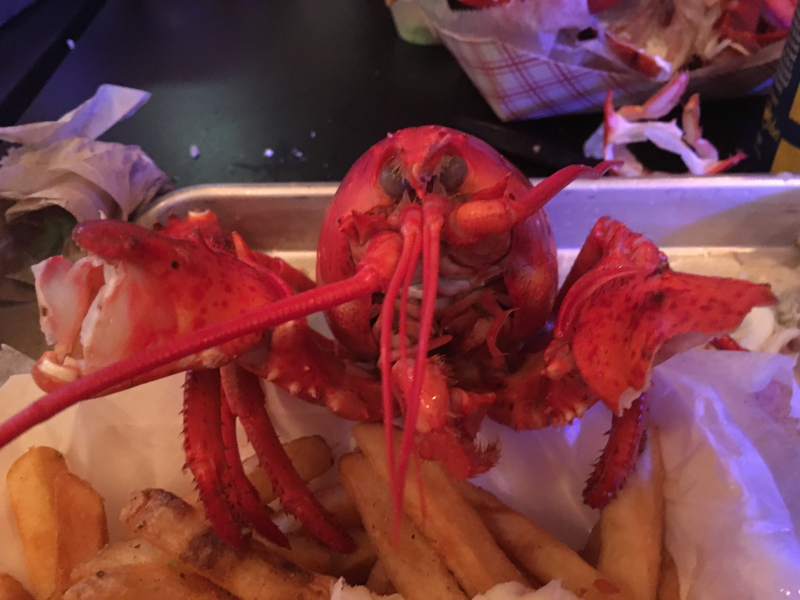 I was as entertained figuring out how to eat the lobster as I was simply playing with it on my plate. There are endless variations of food playing fun times when you have a giant lobster in front of you, and it never gets old.What I did learn is that I like the claw and leg meat of the lobster the best. I don't recall ever having an entire lobster to myself before so there was never a chance to compare tail to claw. Now that I have dismembered an entire giant lobster, I can say with authority, the claw meat is more tender and sweet than the tail, and thus better. 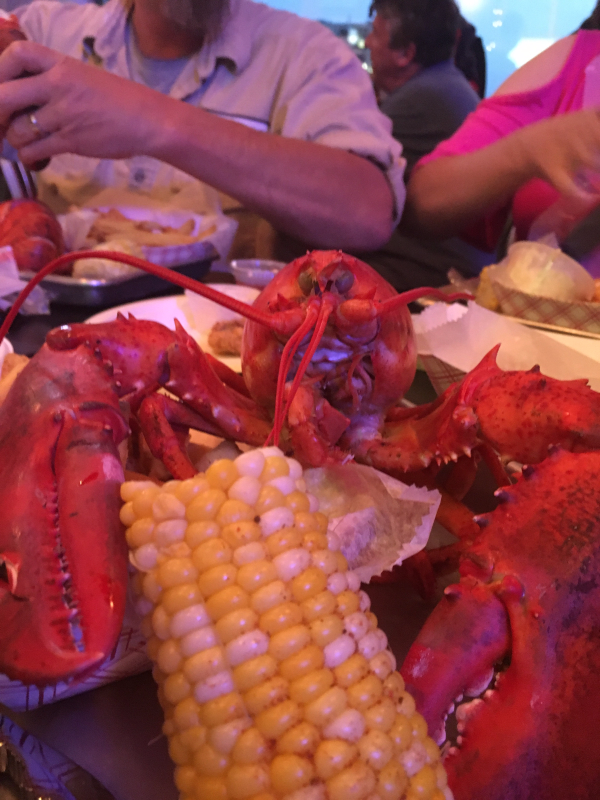 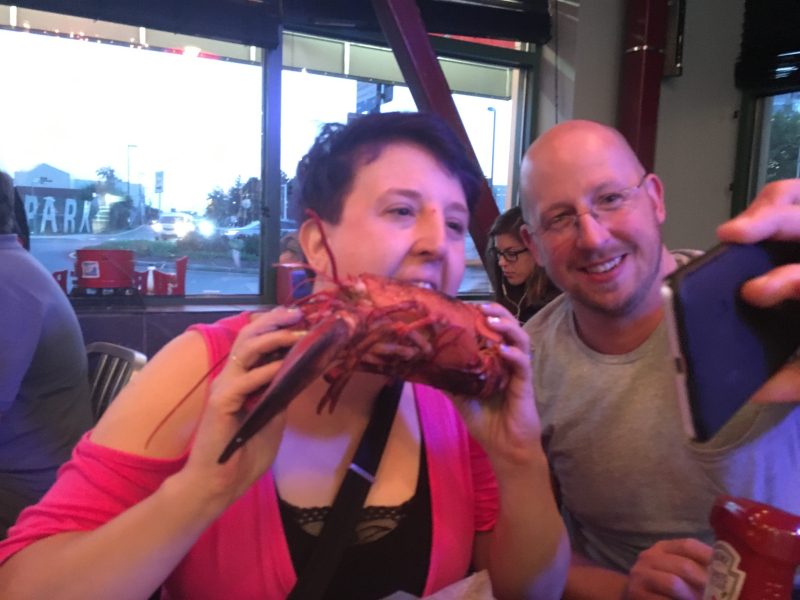 Good times were had by all - as were photos. We all went home full and filled with an experience none of us had before - i.e. none of us had ever had an entire 2 lb lobster all to ourselves and 4 out of 5 of us had one, mostly directly off the lobster boat. It was better this way than if we had gotten into Neptune Oyster, because we actually ate Boston Lobster. We were happy, we were full, we stayed up later than anyone with the level of jet lag should have stayed up talking and playing games. But eventually we did go to sleep with dreams of the next day in front of us. 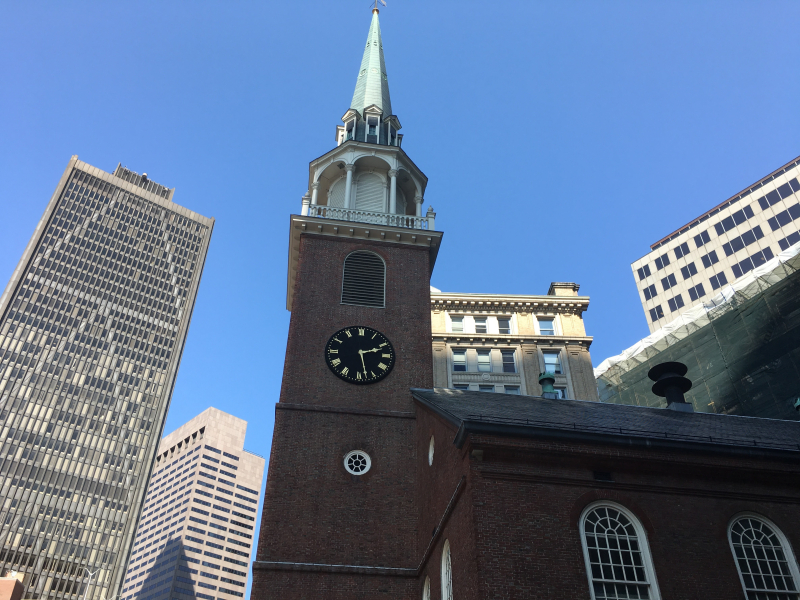