Niagara Falls is as Pretty as They Say It Is

So going into Toronto this year I made the decision to rent a car so I could eat at more restaurants in the city and have a little more control over my environment. Like I wouldn't have to store my luggage at a bus station or stay in a seedy motel to make said things happen.  I was able to accomplish one of my goals at least (next year I will eliminate the seedy motel problem). Anyhow, as I really started thinking about the trip I asked myself what, besides food, did I want to see in the Toronto area? And there it was, just a few kilometers away - Niagara Falls. 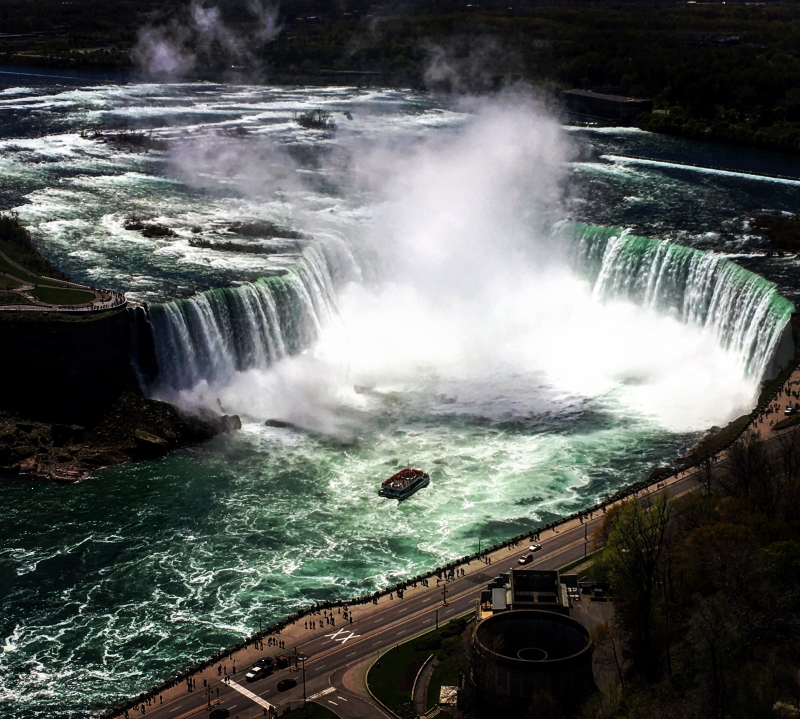 Why not go? I had the car. I theoretically had the time. I just needed a plan. Because of two minor challenges I described in my other Toronto 2017 posts I did not reach all of my planned destinations, but being very tired is a good reason to not drive a lot, and having a crappy hotel is good reason not to sleep a lot. So yeah - that mucked up a couple things so by the time Monday rolled around and my sleep was caught up and my plane flight home looming, I thought - I'm going to Niagara Falls bitches! For like 2 hours total! whoo! Let's do this. So I did. 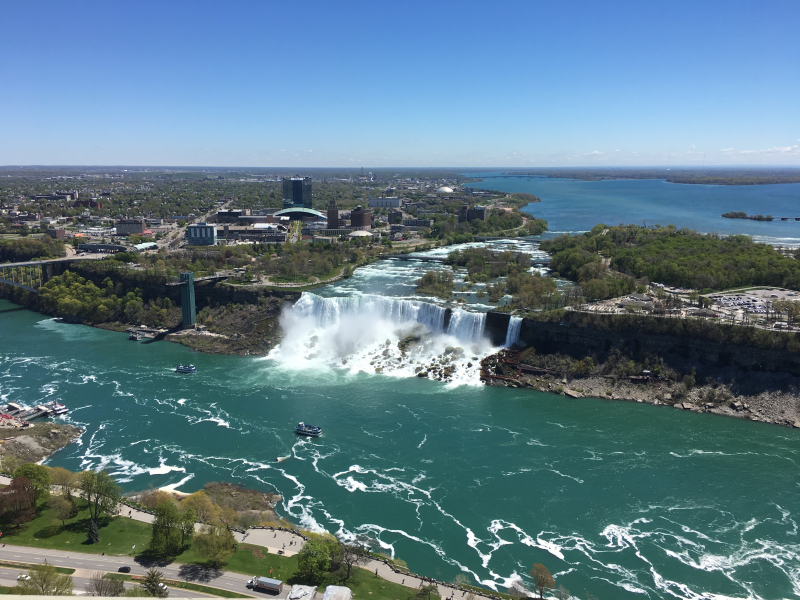 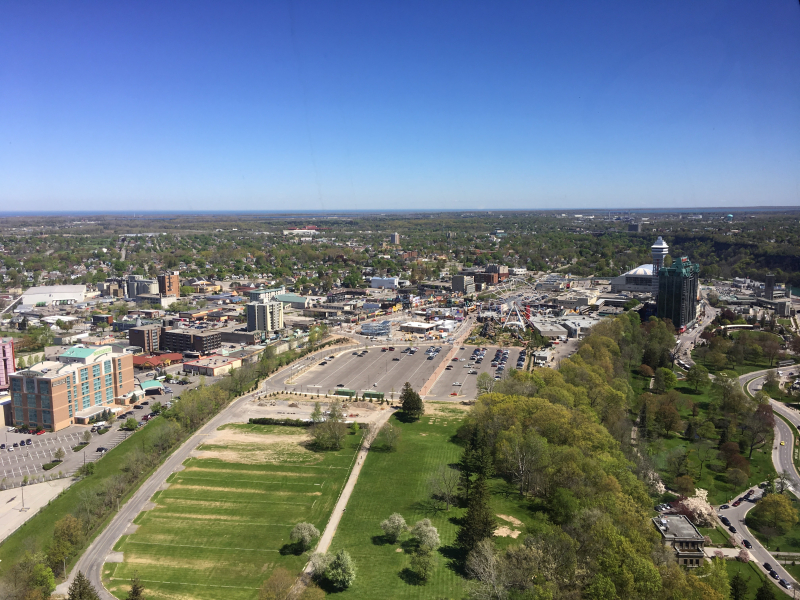 But to find it once I got there I first had to pull over and take a good hard look at the map to find the appropriate destination for my precious two hours (1.5 to be safe) to spend in Niagara Falls and actually see this mythical waterfall in real life instead of just in an Alfred Hitchcock film. 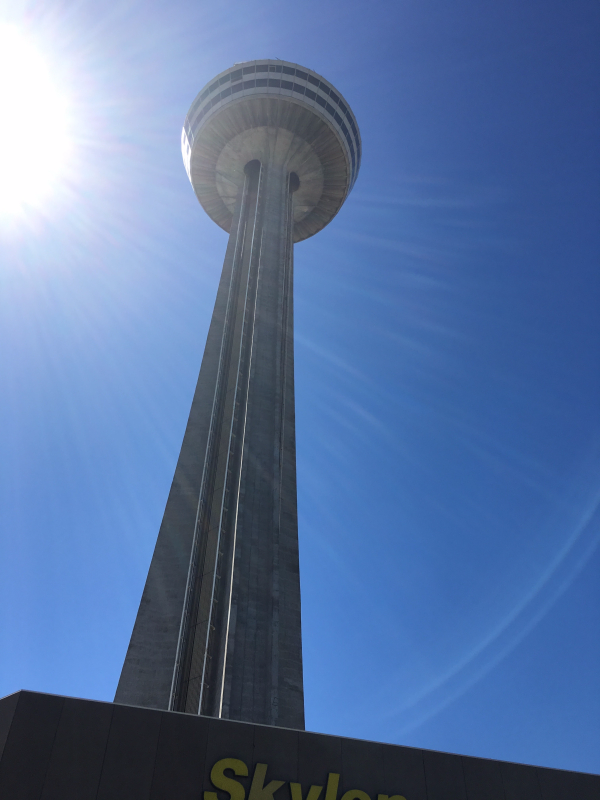 My destination was immediately revealed with the help of The Google - Skylon Tower. Magical viewing megaplex with two super just-for-tourist-restaurants.  Including - you guessed it - one that rotates!  Hell yes. Jackpot. Going to spin around the tall tower and eat some bad food taking some pictures of the beautiful natural phenomena and spend a wee bit too much money doing it. 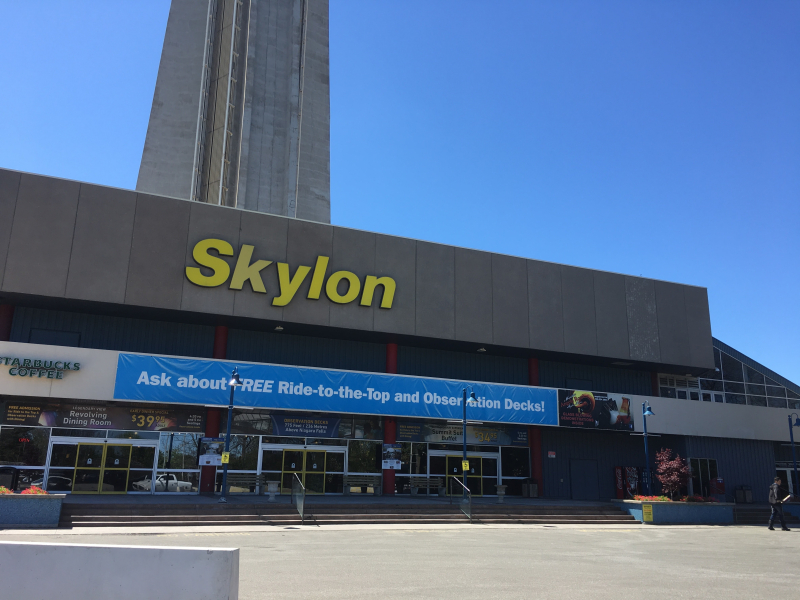 Much like the Space Needle in Seattle the Skylon Tower has tourist photos with fake backdrops, and a spiel about how you can get free viewing access if you just buy one $30 entree. A viewing deck ticket is only $12.95 Canadian, so it is actually less than an elevator ride in the Space Needle or the CN Tower (which is $40 CAD), but who is counting?  I'm just going up another tall tower with low expectations about the dining experience. 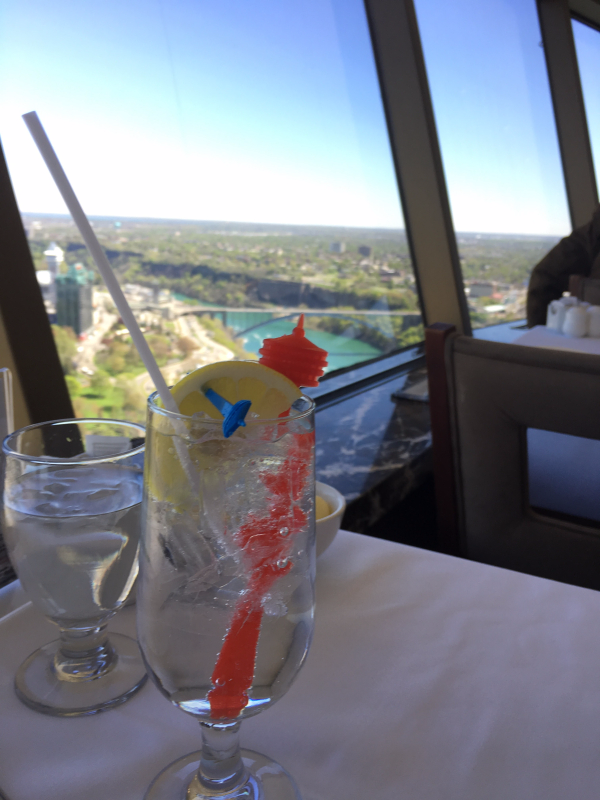 What was funny is that the hustle is so obvious - but the retired people surrounding me in the restaurant didn't seem to get it. They all tried to order soup, or a salad, or just have bread, and skip the entree - which resulted in a "conversation" from the wait staff explaining "the rules" of the game we were playing.  Knowing said rules and reading over the entrees I was very disappointed to find that they were all really gross and made for people with dentures or no taste - so I hailed my waiter and asked if I could order three starters to equivocate for a single entree. The man looked at me a bit weird, thought about it, then said of course. Maybe I just hustled myself - so I threw in a request for a glass of champagne to celebrate Monday. 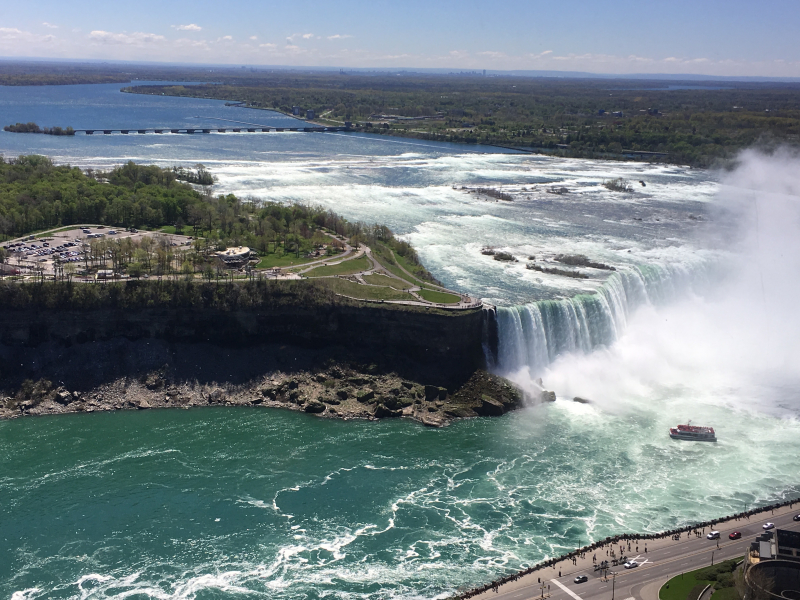 The view as you can see from the photos of this blog post thus far was spectacular. The food was not as horrible as I expected, however, the duck pastrami that I should never have gotten excited about was nasty, and covered in honey - yikes.  Wiping it off with my napkin didn't fix it - it just made me sticky so I just set it aside and attempted to photograph the food and the waterfall simultaneously as I ignored the old man bending over my table to take the picture he could have taken from his own seat. It was weird - grass is apparently greener at the other table? 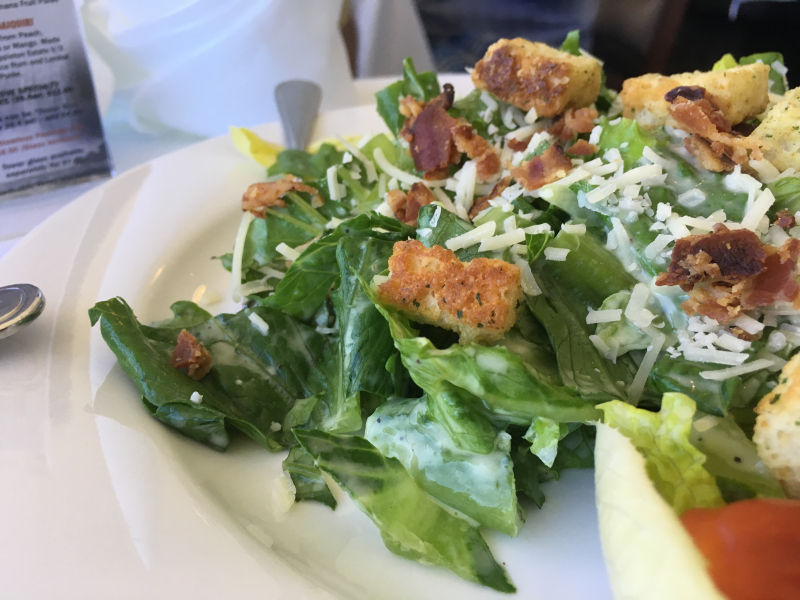 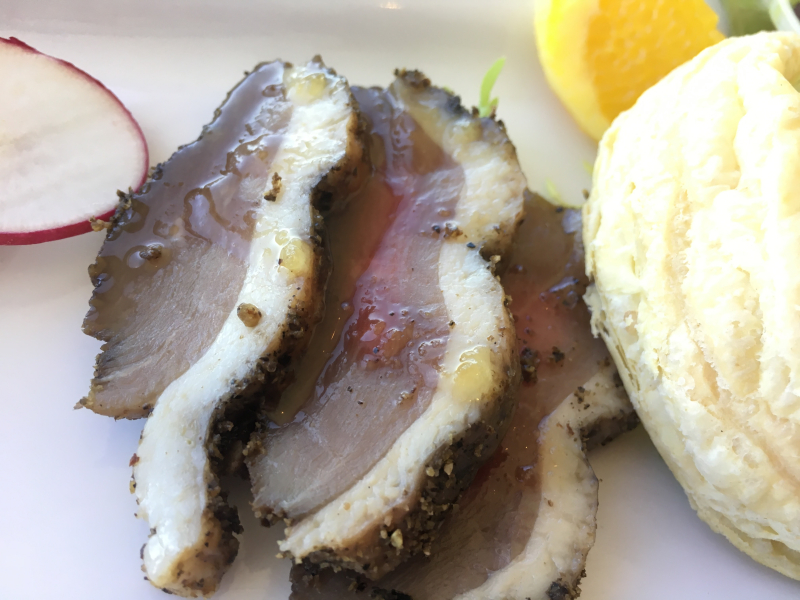 Eventually the restaurant (or my seat) began to rotate past the view of the falls to see the rest of the surrounding area including this giant casino. 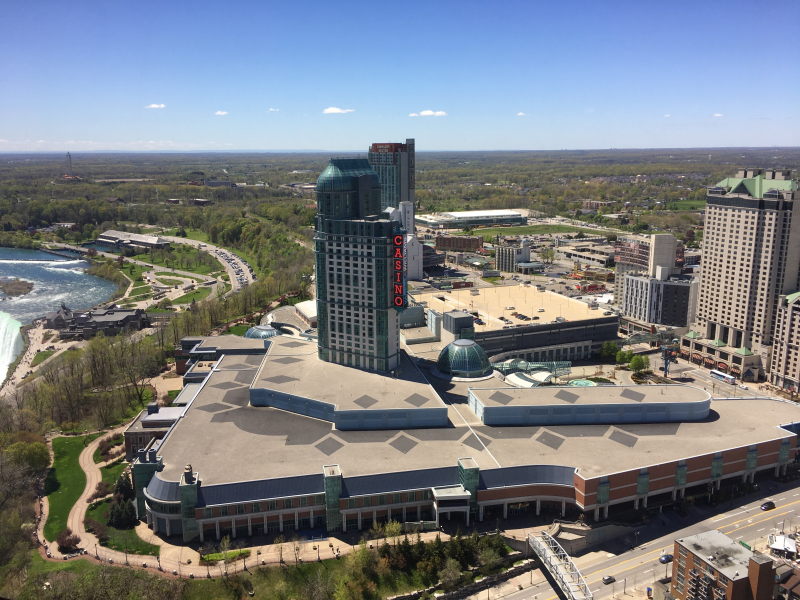 Its bigger than the falls next to it. 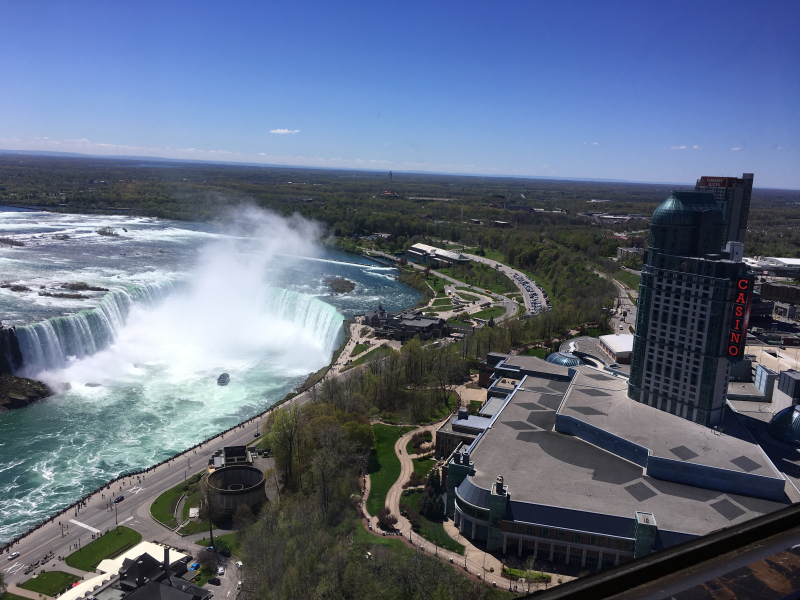 It is amazing how humanity can take a piece of natural beauty and build a blight of capitalist bullshit around it - designed to suck to dollars out of the wallets of all who come to be in awe of the natural thing.  Meanwhile, it must work, because here I was sitting in a spinning restaurant staring at a giant casino with a better view than my spinning restaurant. Poor Buffalo side though, they don't really have a view of the falls at all, just the giant megaplex of tourism on the Canada side. 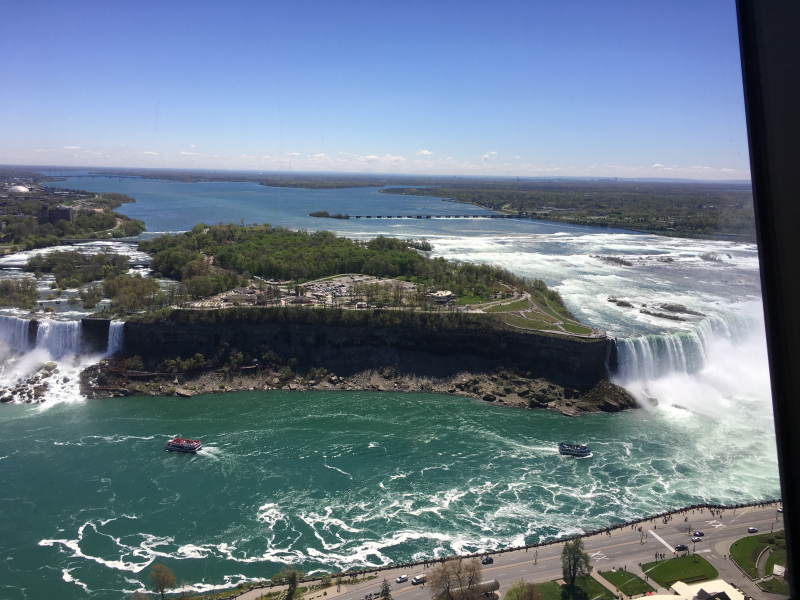 Then, in what felt like less than an hour my rotation around the restaurant tower, my lunch, and my view of Niagara Falls came to an end. I went down to the viewing deck, because I earned it, where the view was not superior to the view in the restaurant, then I went down the elevator and back to my rental car where I programmed in "Toronto Pearson Airport" and started my journey back to the city and traffic permitting, home to Seattle. 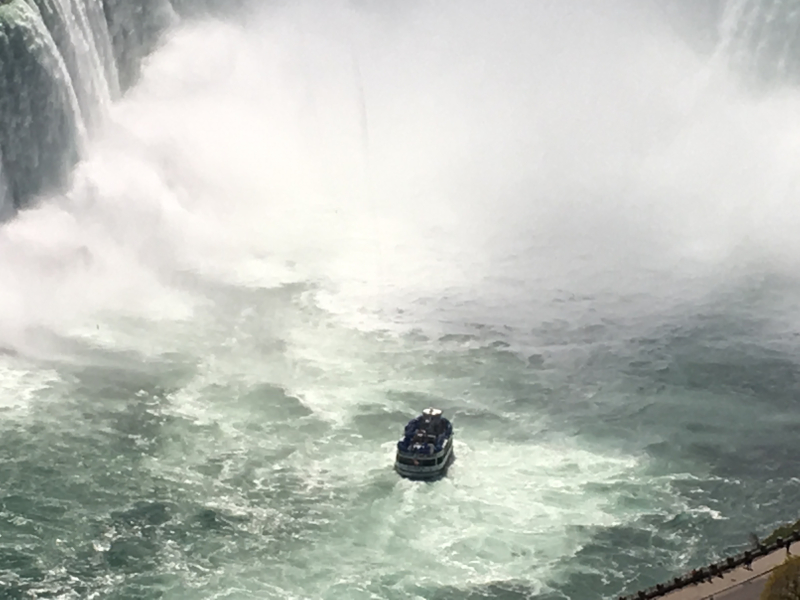 Posted at 04:27 PM in Toronto and Vancouver Canada | Permalink | 0 comments