I love Toronto's food scene. I need to come to Toronto once or twice a year to keep up my training and certification for my energy healing with the Modern Mystery School - so I always try to tack on a day or plan it in such a way that I can try at least one or two places to eat while I am here. This trip was no different - I did about three days of research for exactly 12 hours of free time that could be used to eat. 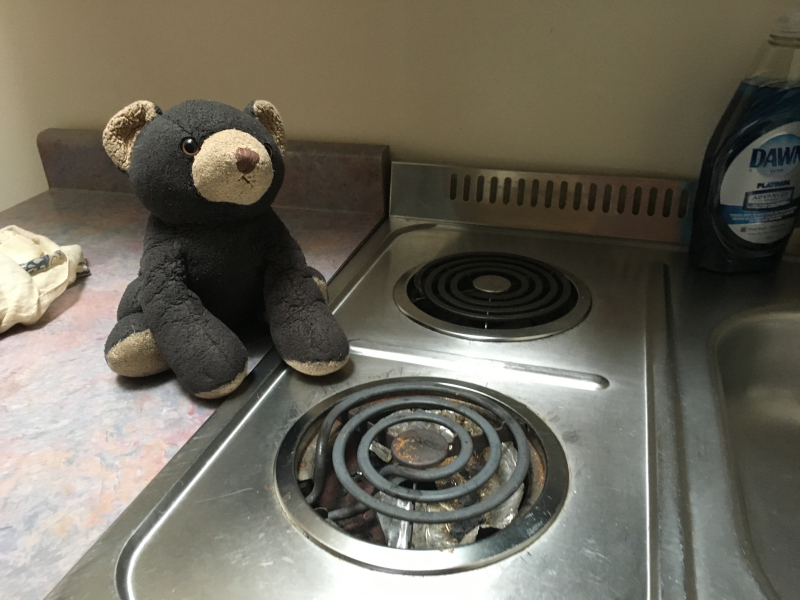 This trip, like my last one, I decided to spend one night in the city proper to maximize my chances of reaching some of the best restaurants of the scene in short succession. As a large percentage of those are in the West Dundas district I looked at hotels in the area when I was booking my flight on delta.com.  I thought using the delta app would minimize the possibility of me being placed in another sketch establishment like last year's Airbnb fiasco. Lesson learned - always read the google reviews of a place. 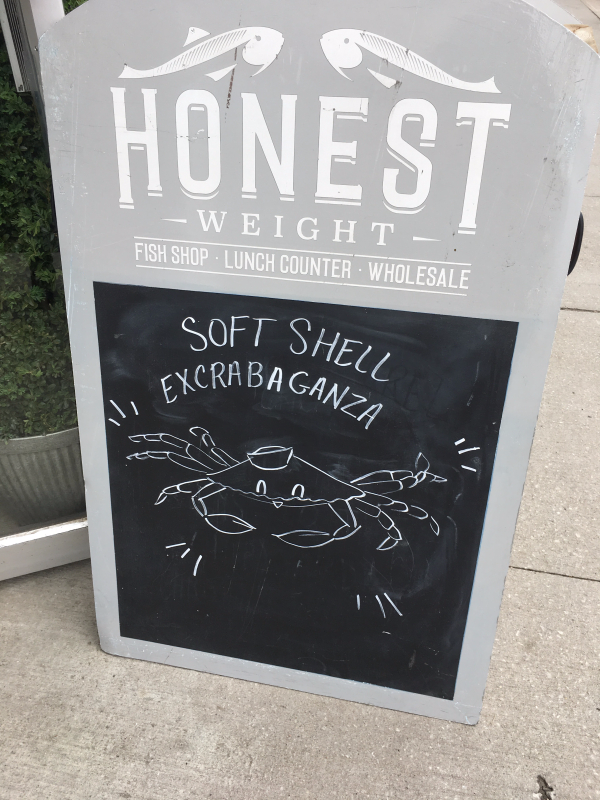 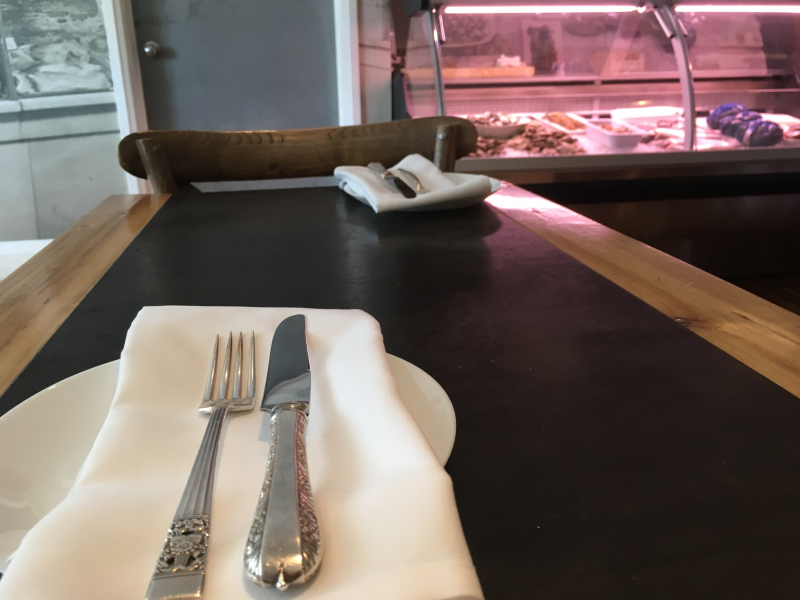 But before I knew exactly what this year's hotel sketch fest was, I drove my snazzy rental car and parked in from of Honest Weight for lunch. Honest Weight is a seafood counter lunch and dinner establishment that also sells takeaway seafood. It is more lunch counter than seafood store but holy wow on a stick was the seafood fresh and tasty. I ordered the soft shell crab and a trout salad to keep it healthy. 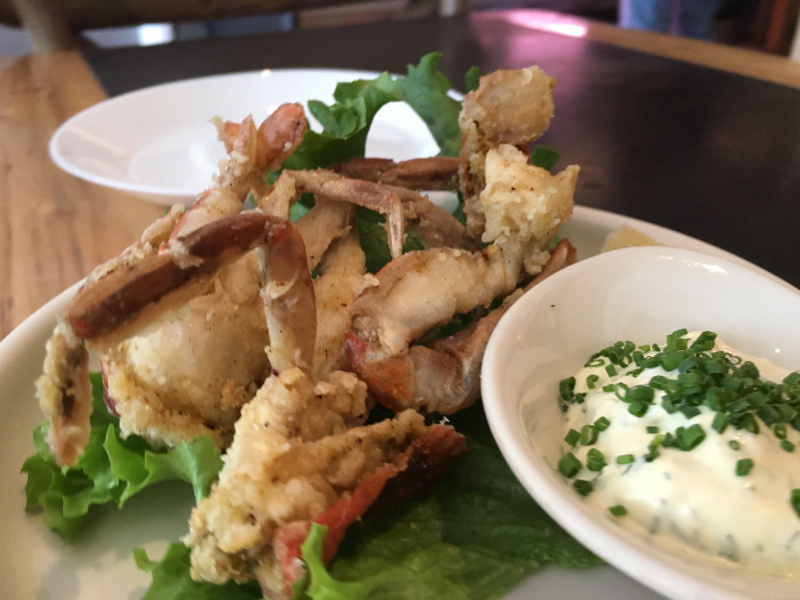 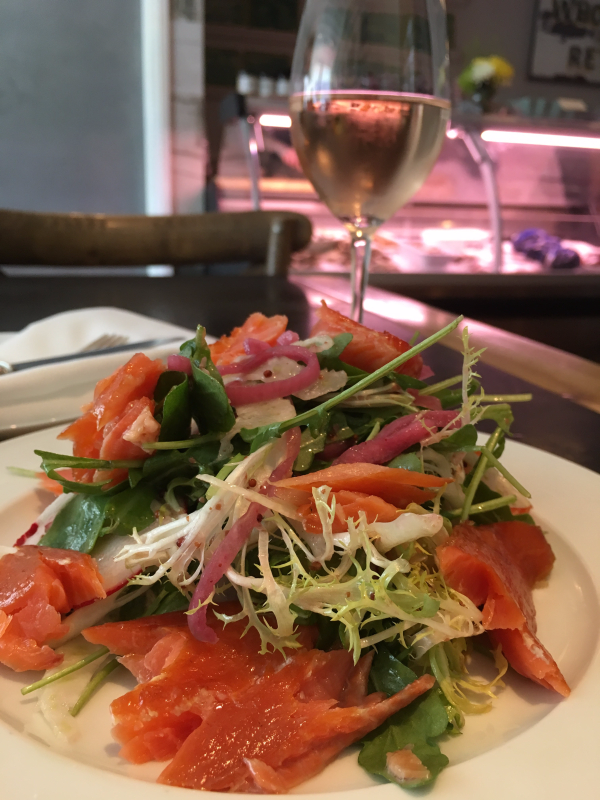 It was a phenomenal lunch, come none to soon for a hungry and weary traveler. I was super tired and thirsty from the red eye flight because I stayed up the entire trip talking to my seat mate in first class. Turns out he was going to a wedding in Minnesota and we had many interests in common (besides being from Minnesota), including food, travel, and international history. I took a little nap in Minneapolis and almost missed my connecting flight - but I was still super tired and it made driving the car a little scary - but I made due and was hoping for a nap at my hotel to pass the time until dinner. 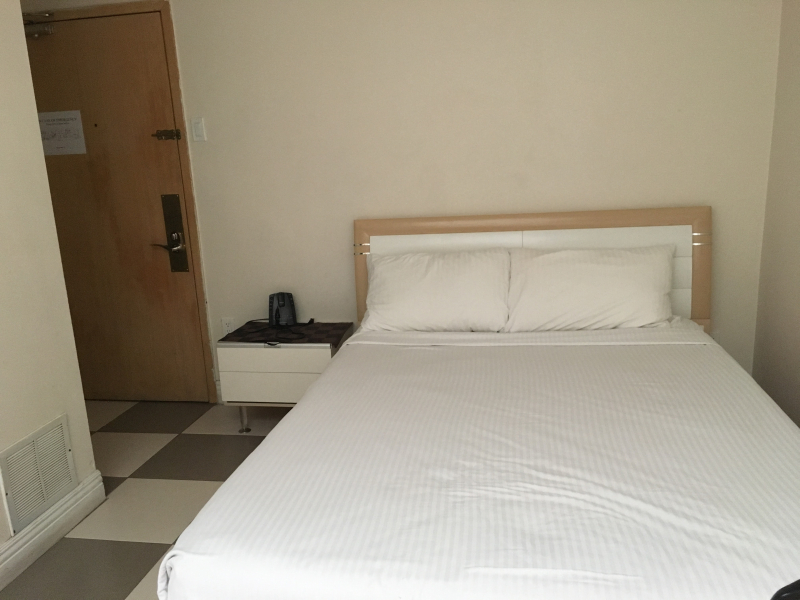 Well, no go on the nap. I was going to have to be catatonic to sleep in the bed provided by my communist era room amenities. Also the stress of getting checked in when the manager was less than enthusiastic about life, and clearly way to used to simultaneously checking people in and being screamed at by unhappy customers. Customers who are rightfully unhappy because the rooms are nothing at all like they show online and the reservation is non-refundable. So essentially the place is a scam - and this unlucky woman gets to be the front end of said scam - great deal for no one involved. For the level of problematic-ness of the place, it was pretty amazing she stayed so calm and removed from the situation. I've slept in worse in third world countries so I decided to make due because it was clean, there was a dead bolt, and I had my own shower. Next year I will just bite the bullet and sleep in a real hotel, and not take a chance on the "to good to be true deal" because it is always actually worse than expected. 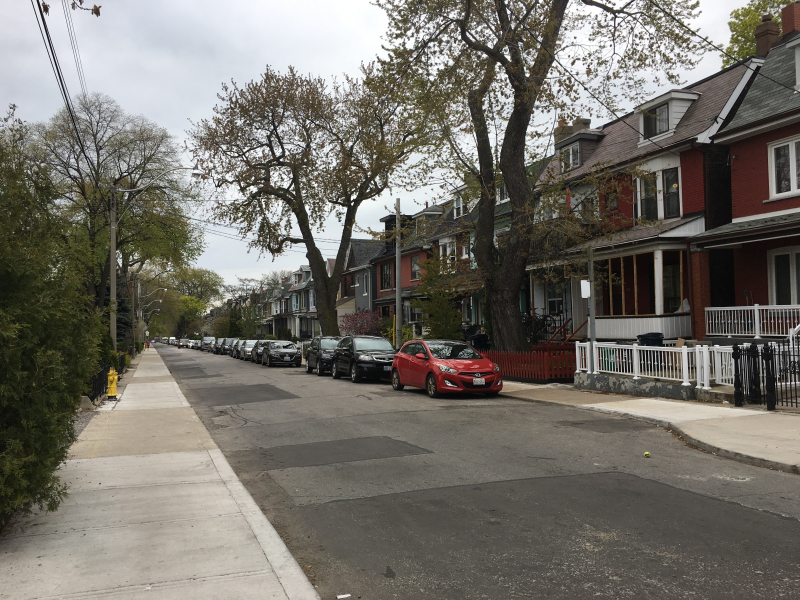 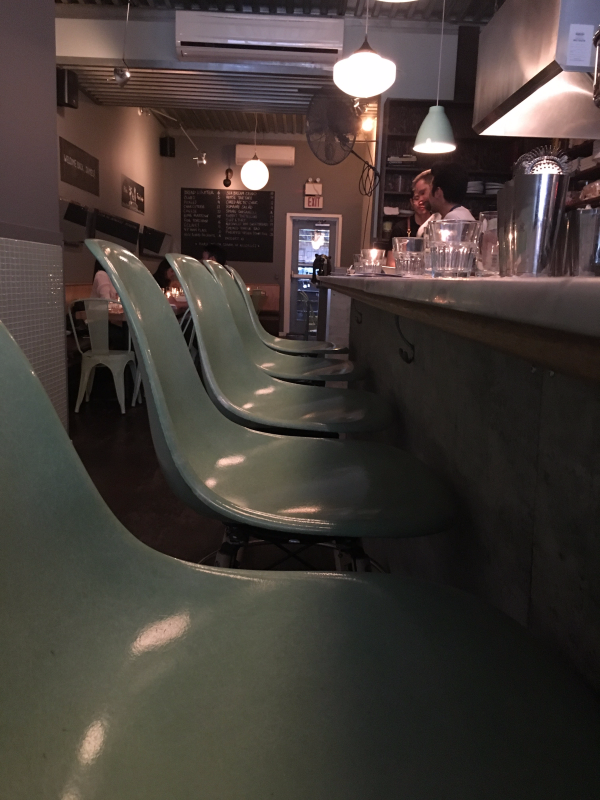 Because I couldn't take a nap I went wandering through the neighborhood, hoping some blood running the the system would perk me up so I could make it to dinner time. I did alright and found myself sitting at the dinner counter in the Black Hoof 2 minutes after opening ready and waiting to try the horse tartare. 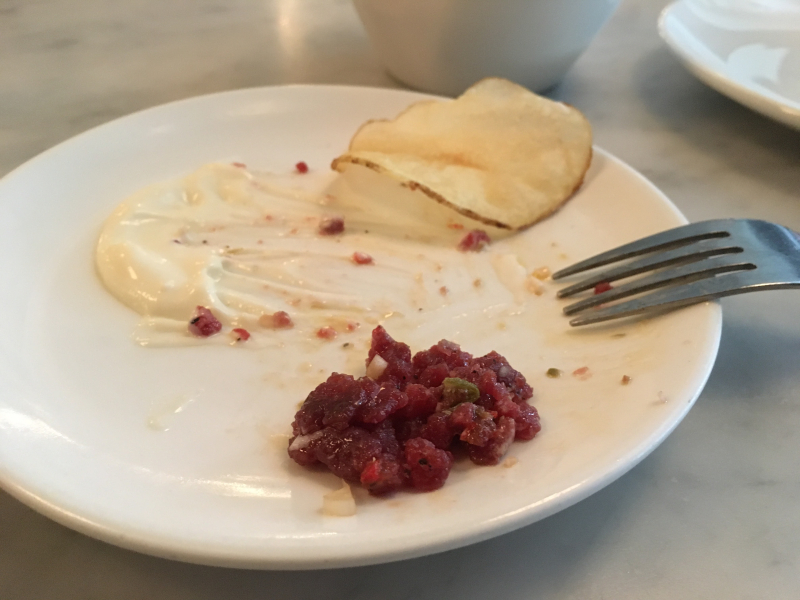 Yes, I said horse, and it was good. It tasted like if venison were tame meat. It was so good and worthy of analysis that  I wanted to eat more but there were other things to try like sweetbreads and bone marrow. 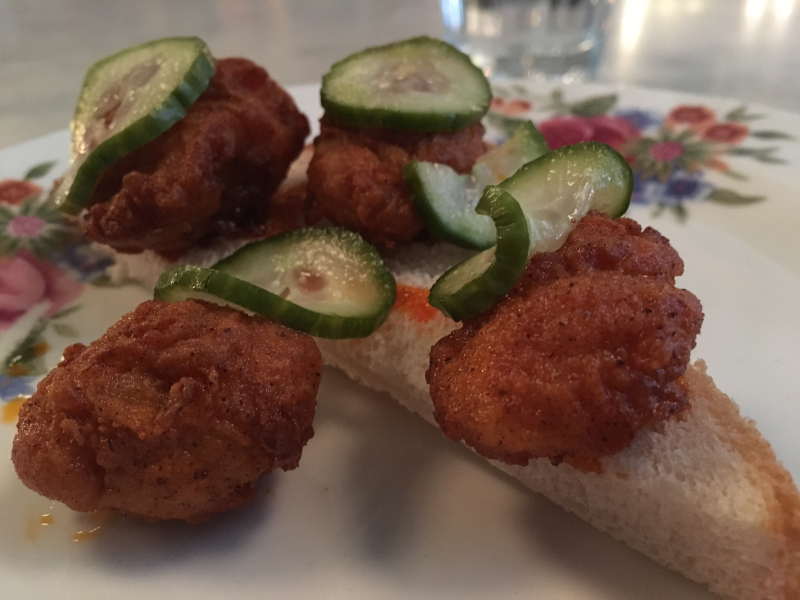 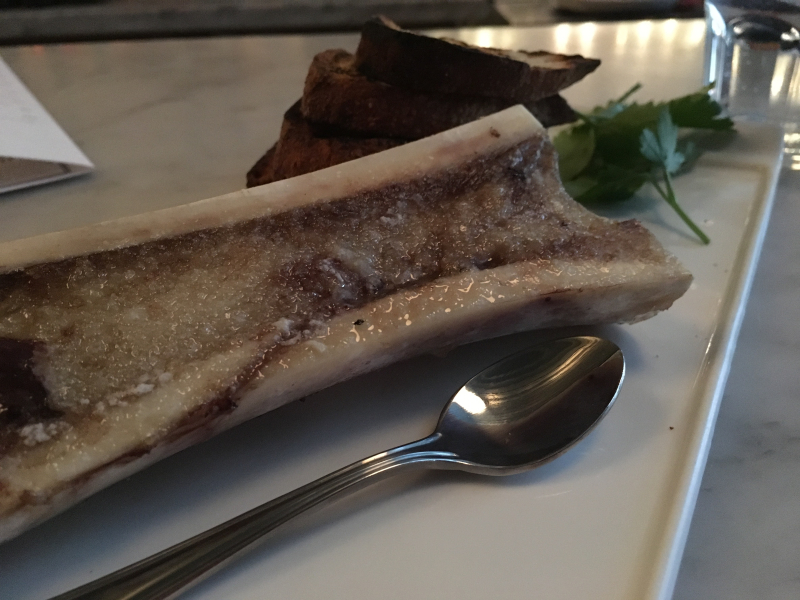 After a light dinner of appetizers I thought maybe there was a shot I could get into a 5 course set seafood dinner at Edulis. I was wrong - turned away in no uncertain terms by the nice hostess with a little bit of sympathy for my pathetic attempt. Apparently, I'm off my super power game of getting into anywhere with my smile. I wasn't hungry anyway, just being greedy for more Toronto food goodness - so it was for the best. I walked about again taking in the neighborhoods until I realized I actually was a little hungry and not yet ready to completely pass out in my room. So I finished the night off with a tasty beverage at Queen Margharita Pizza across from my room until a decent time for passing out on my wooden board of a bed came about. 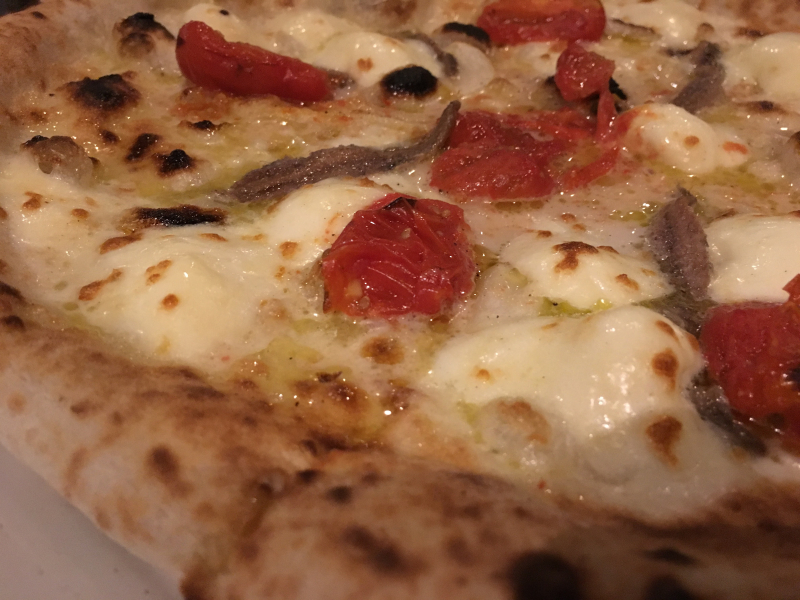 The next day would be a new day in Toronto with more sleep.

Posted at 04:08 PM in Toronto and Vancouver Canada | Permalink | 0 comments