Eating a Pig Head with Friends at Radiator Whiskey in Seattle

Who doesn't want to eat the flesh off a smoked pig's head?  OK, well maybe the majority of the people in the world who are not food adventure addicted - but this foodie was completely fascinated with the possibility. 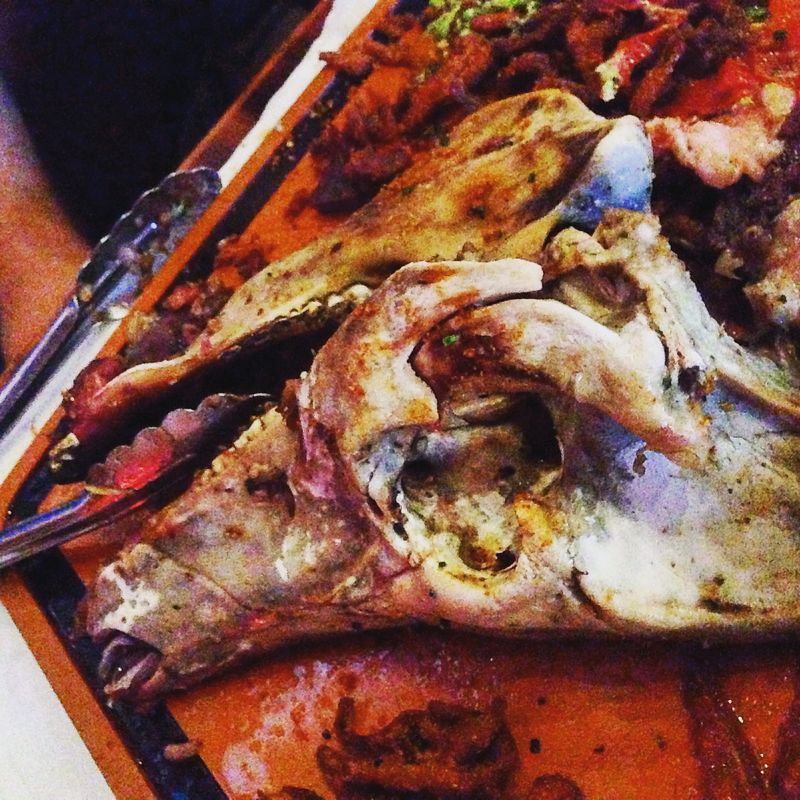 As soon as I learned the opportunity was just a phone reservation a way - I put in the call to my other food curious friends and booked a date with a pig head for myself and up to 8 other people at Radiator Whiskey, Pike Place Market, Seattle.

Radiator Whiskey is tucked into a portion of Pike Place Market that only gets foot traffic if you are looking for it.  But many people are looking for it, as it has topped the best bars, best bourban, best food adventure scene since it opened its doors a couple years ago.  At 6:30pm on a Saturday it was hopping, and all of us were late to the reservation, save one, luckily he got there early and was tasting the house infused whiskey. 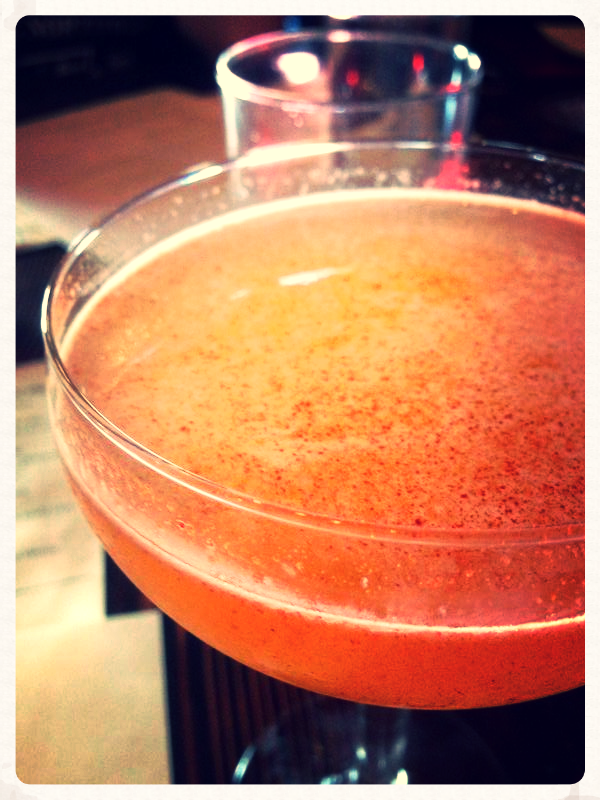 This cocktail is called the Lap Dance.  It featured a tea-infused whiskey, and was quite tasty. 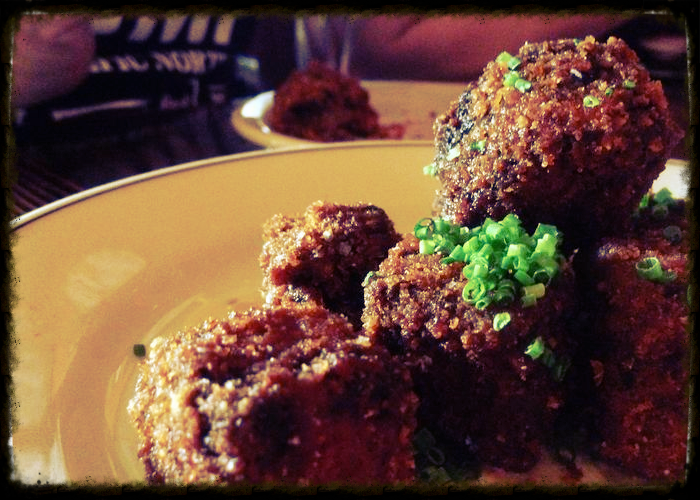 Because there were 7 of us we also ordered almost everything on the menu to go with our pig head. It was officially a lot of food, and none of it was light fare, except for the salads.  Above, for example, is the fried beef lip terrine, little deep fried delights of luciously tender beef face. 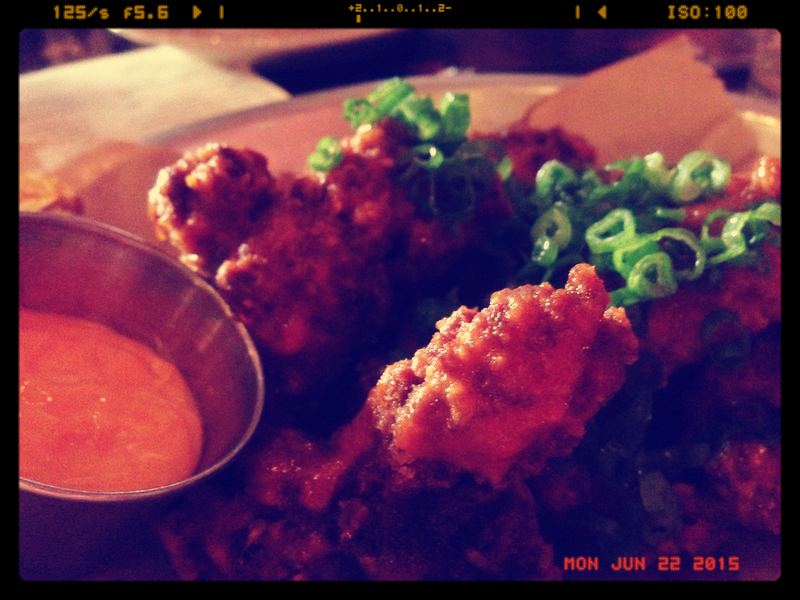 The terrine was followed by cornflake encrusted chicken livers with hot sauce.  If buffalo wings could morph into deep fried chicken livers, they would taste like this dish.  Soon after its arrival we were bombarded by bison sloppie joes and the turkey leg confit. 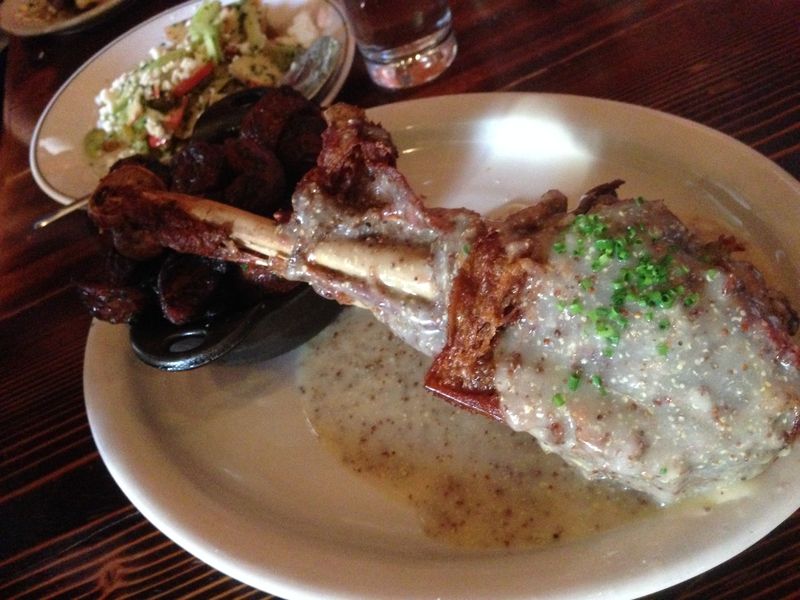 If I were to describe the food of Radiator Whiskey it would be that of a hungry lumber jack with gourmet/butcher training and deep fryer.  I do not recommend trying to eat more of the menu than we did - food coma will ensue, along with the slight discomfort of being overly full ( a serious first world problem). The pig head and a salad may have been enough for a group of small eaters. 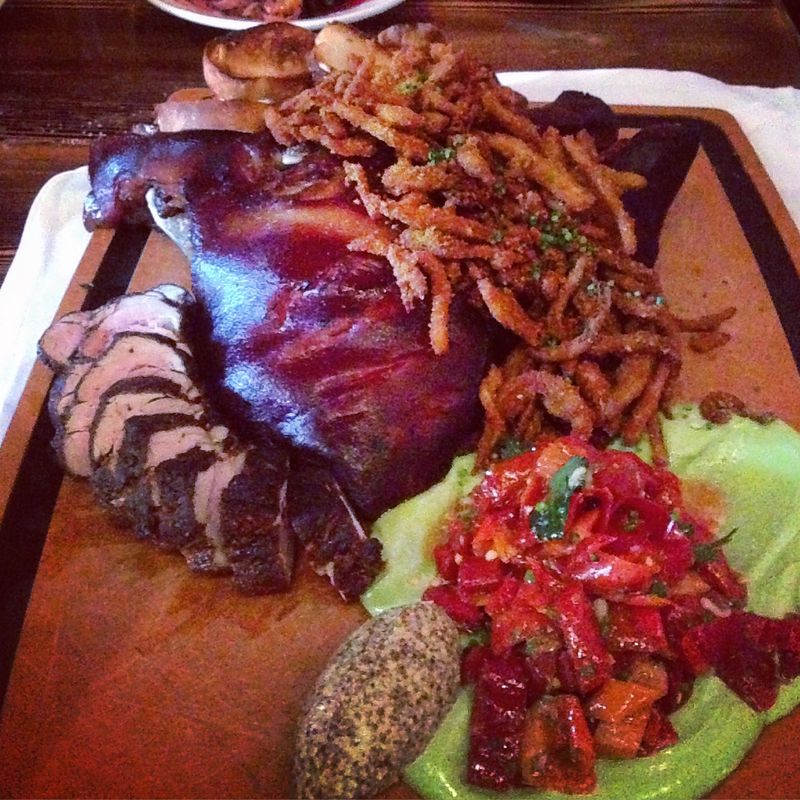 A part of me was hoping that the pig head would arrive upright and staring at me - as there is nothing like looking directly into the face of your food - its eyeballs boring into your soul.  If, for nothing else, to recognize and honor the creature that has become your meal - a practice well ignored in our industrial urban society where food magically comes from stores and restaurants.  This dish however, is only half a smoked pig head, so it comes lying down with only a half tongue, one eyeball, and a bunch of pieces of ear battered and deep fried in some type of delicious celery salt cornmeal to chew on.  It is still recognizably a pig's head, and an animal to honor before eating, it just could not give us the official stare down. 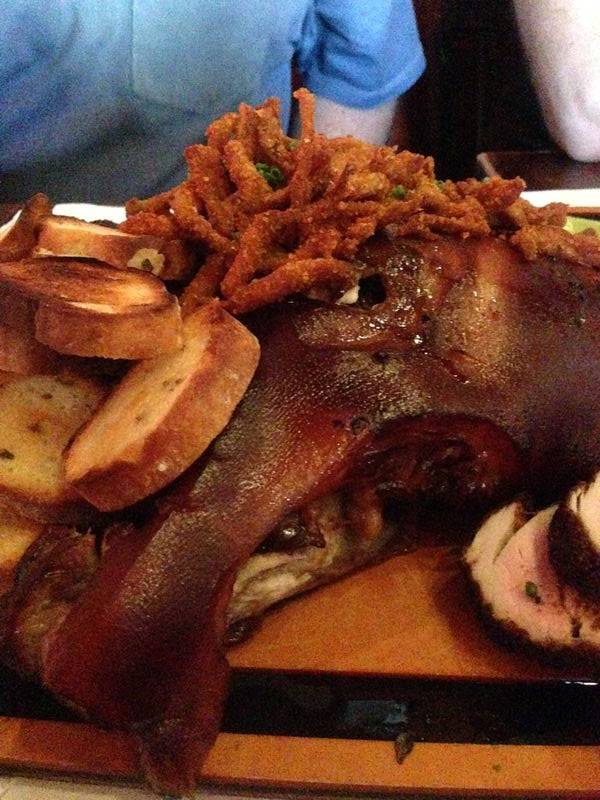 We had to divide the eye five ways because all except two of us wanted to try it.  Our server offered us a shot of whiskey for the task, which we accepted, even though there was no need to bribe our table. I didn't get the best shot, but you get the picture. 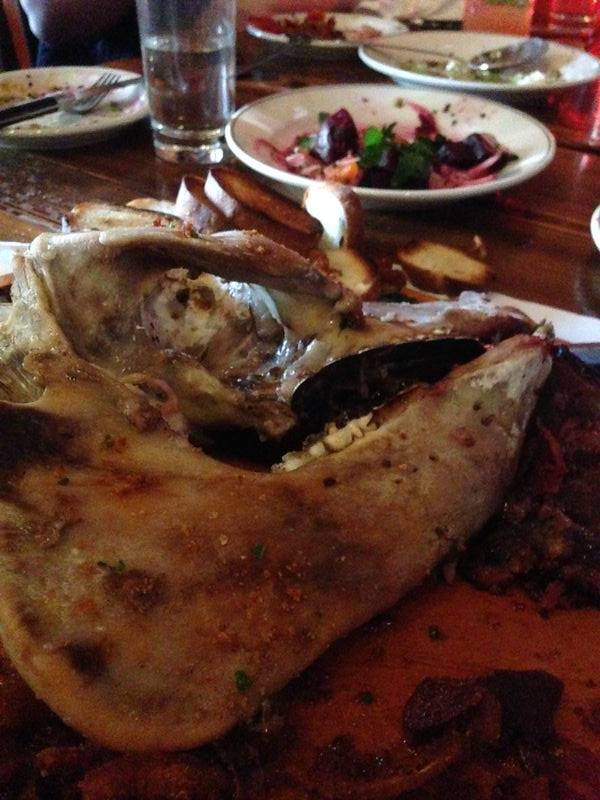 Everything was devoured except for a big chunk of skin.  The leftovers were packed in a doggie bag box for Odin, the world's most spoiled foodie dog. 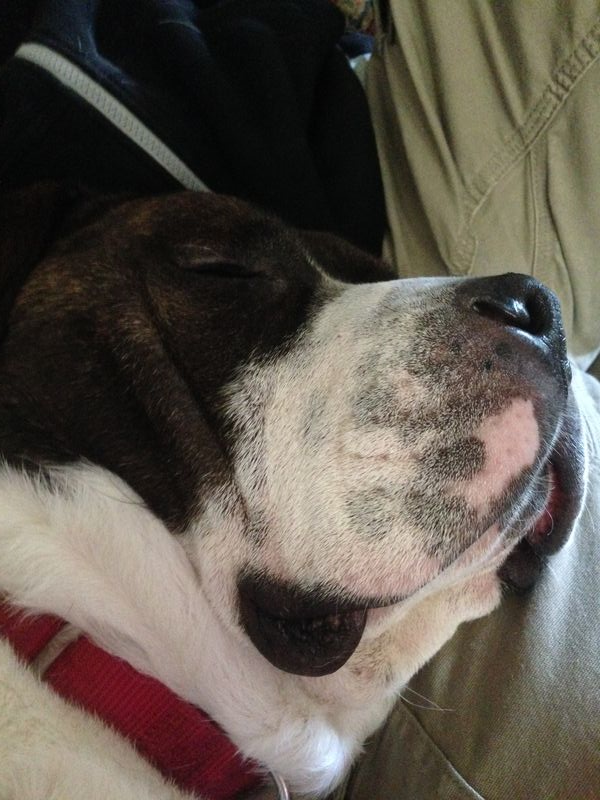 Meanwhile, we topped the meal off with dessert, because we had not completely gorged ourselves to a point immobility. 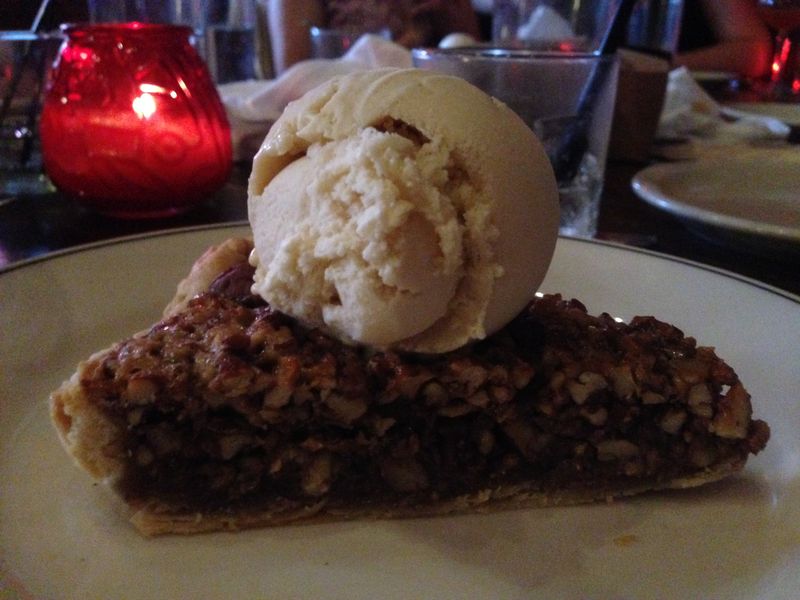 A little pie and whiskey later it was all over but the digestion and the memories. 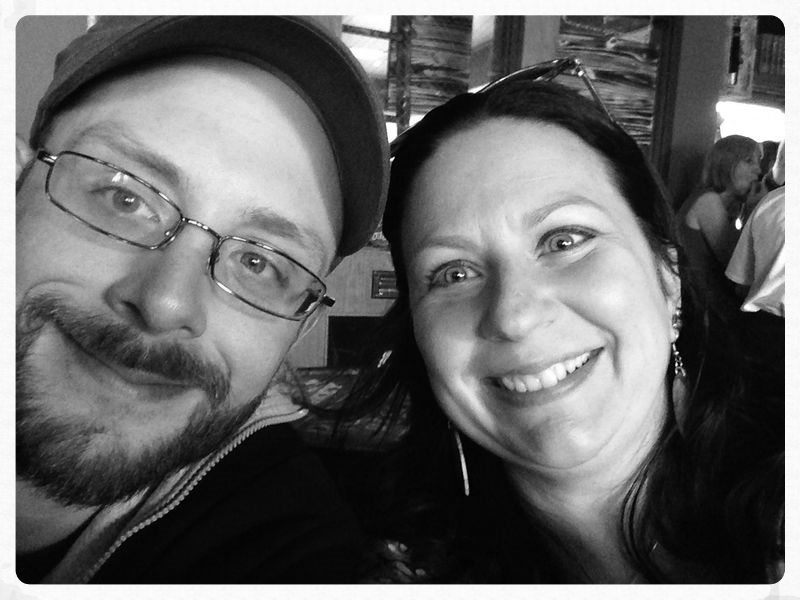 If you would like to experience eating a smoked pig head at Radiator Whiskey in Seattle - follow the instructions on the website and call a fews days ahead, using the phone, to reserve both your table and the pig head.  The menu says it serves up to 3 individuals - but in our experience it could have easily been a meal for 4, even without all the additional food.