Santana the cabana boy is now my best friend providing me with the facts of his life story in exchange for my 100 rupees per day chair rental. Business at the beach is slow and he feels I need protecting from all the possible dangers the sandy shore of Candolim Beach, Goa could wash up - so he sits next to me and chats my ear off intermittently shooing away a massage vendor, marble or trinket seller, men with cameras, and yells at those who dare sit in his chairs without paying rent. This morning, while I was sunburning my shins I taught him some US history including slavery and it's abolishment, women's lib and current political climates. He told me about Goan fishing techniques - which for commercial fisherman is - put out a net and drag.

After beach time I called for a taxi to bring me into Goa's capital city Panjim to explore and find an ATM to solve my dwindling cash problem thanks to the daily cab fares to get out of closed Candolim. 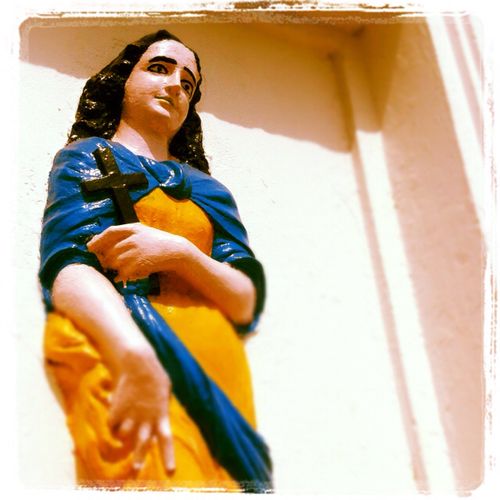 My driver dropped me in front of the Church of Our Lady of the Immaculate Conception. 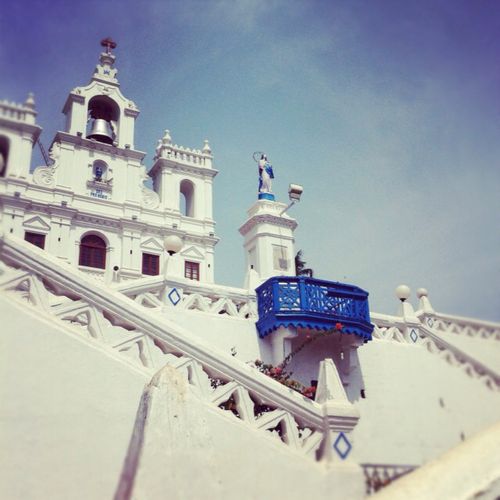 This beauty was consecrated in 1541 when Panjim was just a fishing village - sailors from Lisbon would land here and praise God for the safe passage before continuing east on the river to then capital Old Goa. I did not get to see the inside as it was closed but my camera found it quite a photogenic building. 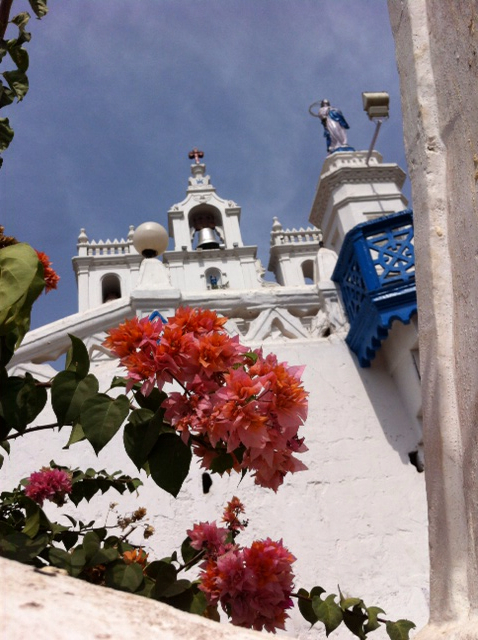 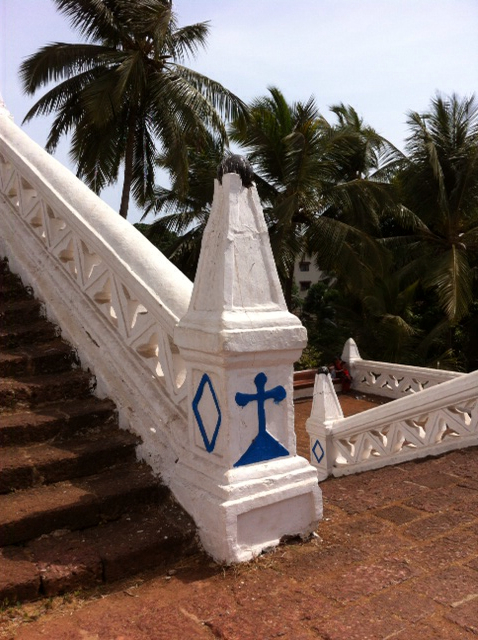 After my photo session with the white and blue church guarded by Mary I headed down her steps and across the street to George's Restaurant for some fresh Goan seafood. 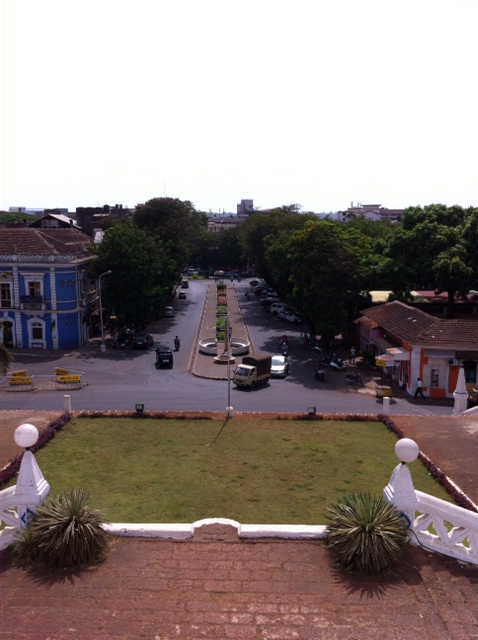 I think I was upsold - as I was instructed to order both the Kingfish Curry Rice and a piece of Garlic Butter-Fried Kingfish. When delivered it was obviously two meals but I did my best to push through because of the amazing flavor of the food. 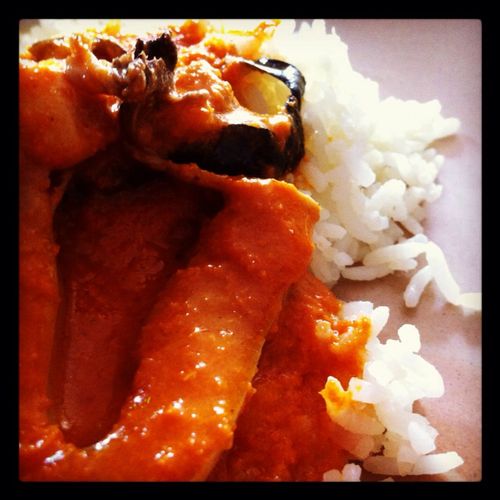 The Kingfish Curry tasted of an unknown pleasant and delectible tang never before to meet my tongue - not a hint of fishy flavor just the presence of its smooth oils preserved in the cooking process - it pirouetted between light heat, lime and some concoction of Indian spices slowly simmered to perfection. 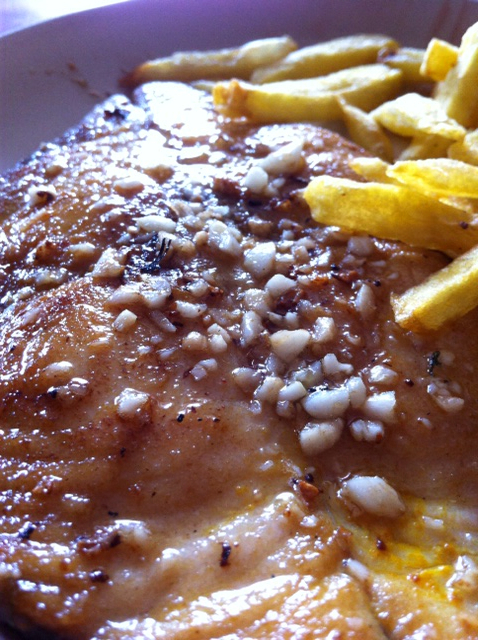 The slab of Kingfish next to its curry twin had the texture of inside a butter crescent complimented by the garlic & spice flavors. 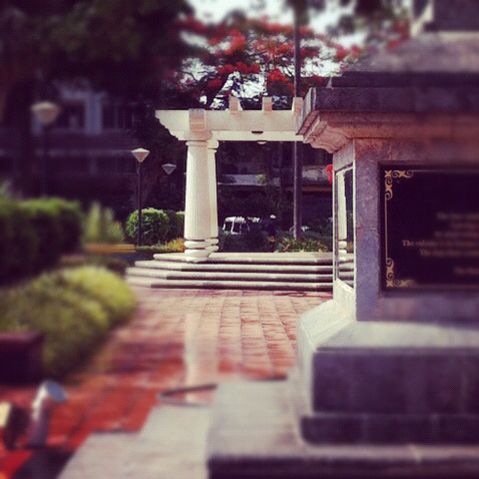 Lunch complete I wandered Panjim's beautiful municipal park admiring its landscaping, taking in such curiosities as "Blooming Dales" handicraft store and the identifying the Jesuit Building with its dramatic signage. 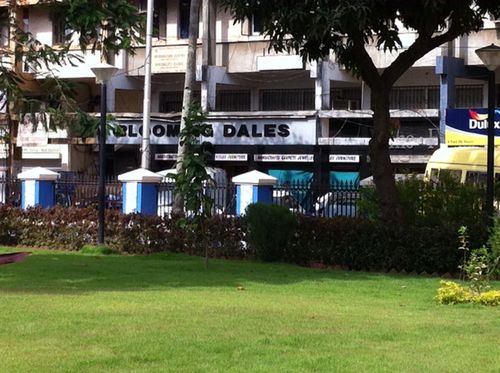 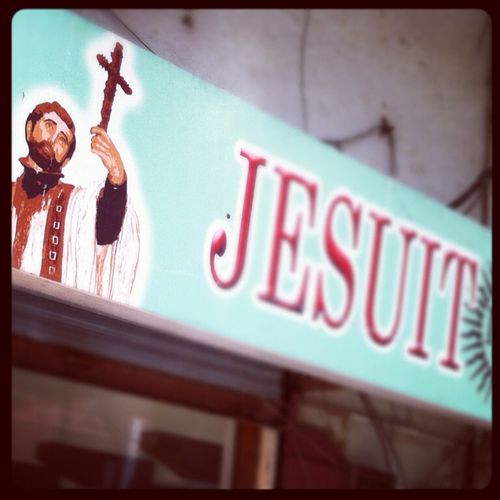 Inside the Jesuit Building is Mr. Bakers, bakery of Goan cashew biscuits and Portuguese cream cakes since 1922. 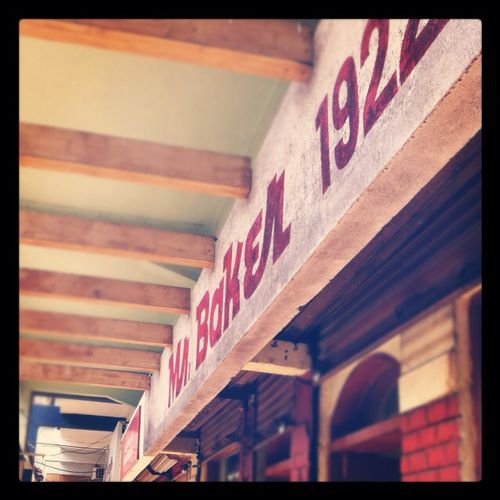 Its blue interior was inviting me to sit for a while but the Goa State Museum's closing time loomed so I called my driver. 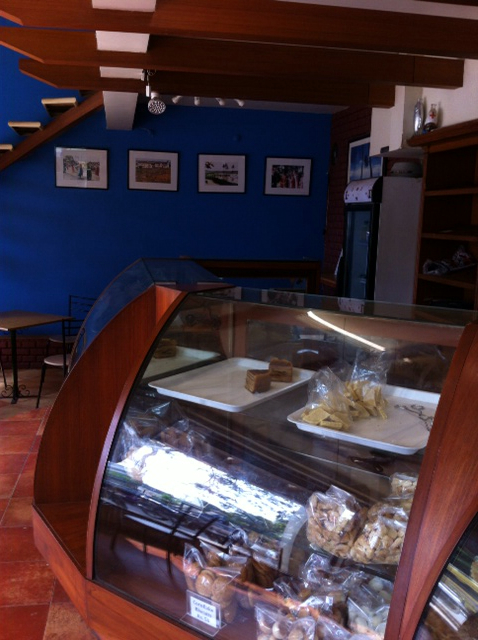 He did not answer - so I called him again, and again and then started walking the vicinity looking for a red tourist vehicle with an orange Ganesh on the dash. Narrowing it down to three I found him fast asleep in the front seat of the second with his phone on silent. 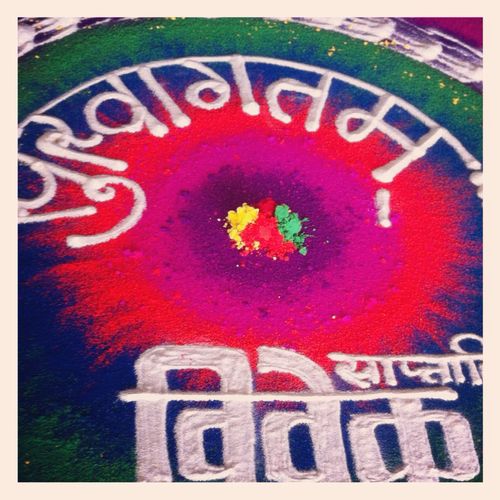 We then almost found the Goan State Museum - but luckily the folks at the city library know its right next door. Having been to every museum between Goa and New Delhi I was impressed with the juxtaposition of completely random and well-curated and informative exhibits. 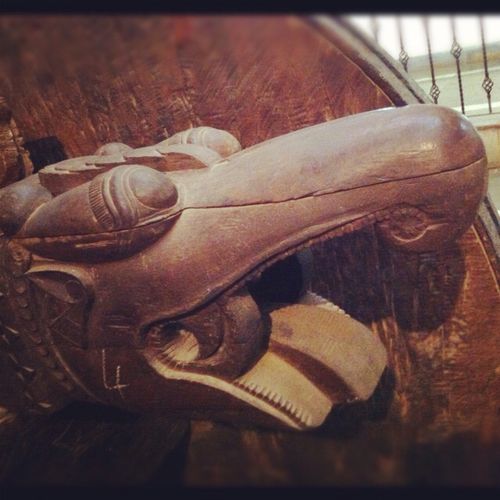 Perhaps because I've seen so many Vishnu, Buddha, Brahma and the other sculptured deities on this trip I was most fascinated by the collection of Christian artifacts. This is a shot of Jesus in India. 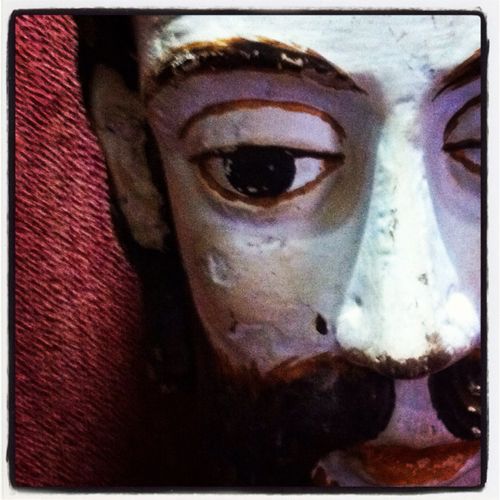 Somewhere in the dark wooden complexions of the unknown saint statues you could feel the weight of forced conversions, bloody resistance and oppressive inquisitions of the Portoguese military and religious occupation of Goa for 400 years. 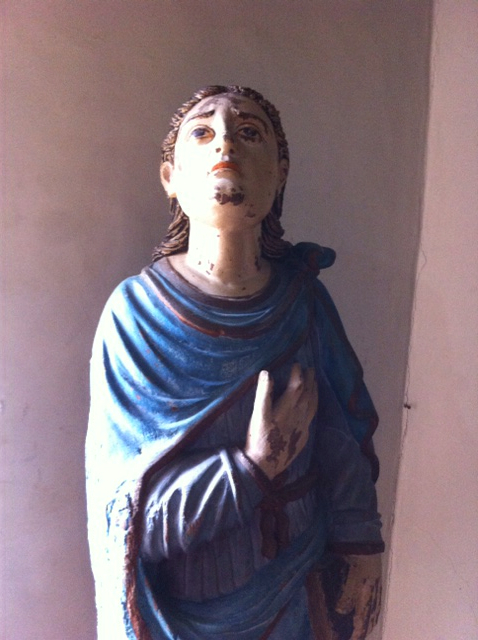 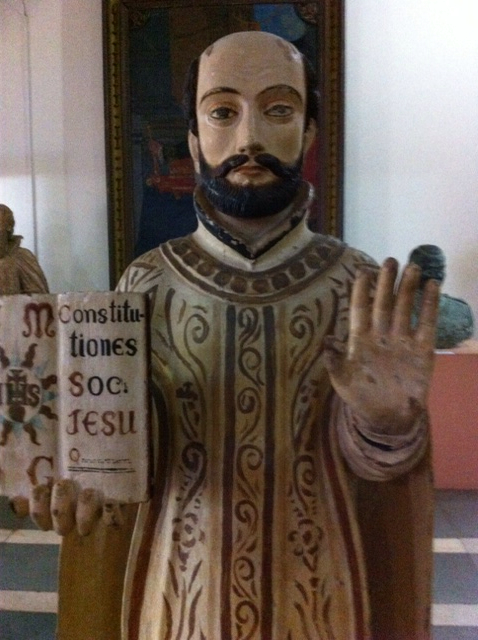 Then I walked into a room that held the actual Goan Inquisition table - yikes! 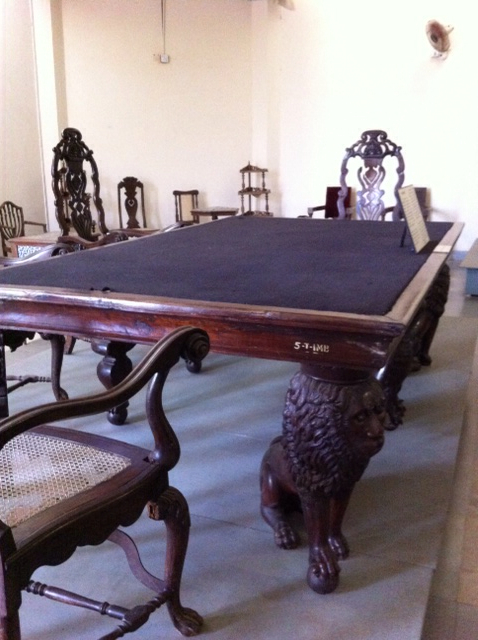 I spent the most time in a small room plastered from floor to ceiling in photos and paintings of Goan Freedom Fighters and Satyagrahas - reading a thorough report of the struggle for Goan independence from the colonial rule of the Portuguese. Independance came to fruition on December 18, 1961 with the Portuguese surrender to the Indian army. I was deposited back at the hotel, where I now appear to be the only resident. I ordered some tea and dug into my bakery treats to contemplate my plan for tomorrow and this post. 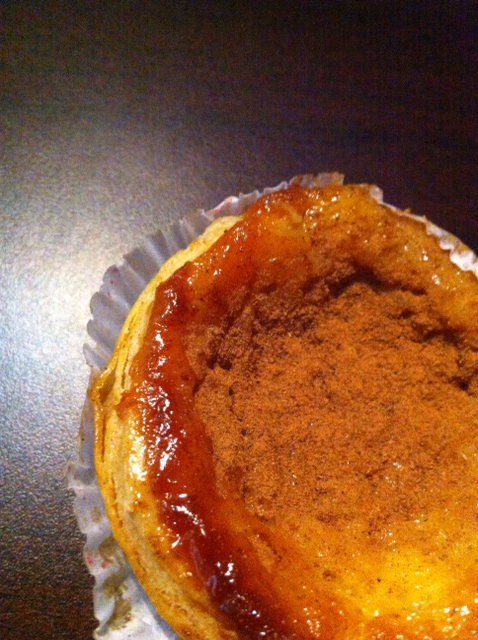 As my legs are now the color of pale rhubarb I will not be spending much time at the beach anytime soon. 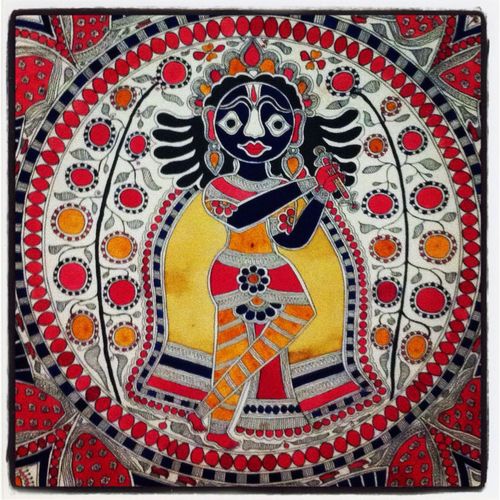